Longford urged to 'come up roses' for Cystic Fibrosis Ireland on Friday, April 13 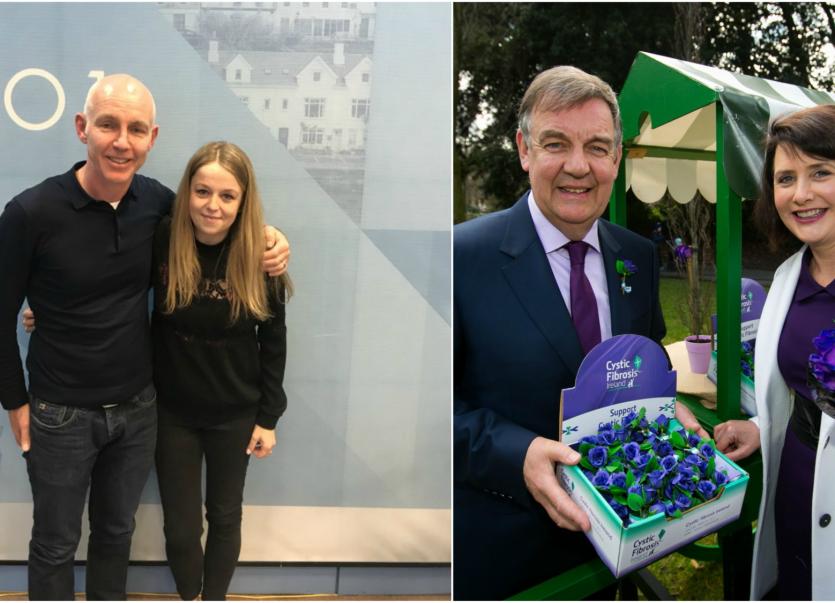 Longford Cystic Fibrosis sufferer and campaigner, Jillian McNulty, was overwhelmed with emotion and shock when following an interview on The Ray D’Arcy Show, four people, strangers to her, got in touch offering to act as living kidney donors for her.

Jillian spoke with Ray, on RTÉ Radio One on Wednesday, April 4, as part of an interview to promote Cystic Fibrosis Ireland’s 65 Roses Day which takes place on Friday, April 13.

Jillian mentioned that she will soon require a kidney transplant and in response, listeners got in touch with the show offering to donate a kidney.

On Thursday's Ray D’Arcy Show, Jillian remarked,  “It’s an incredibly kind thing to do. I’m actually in shock, to be honest. I cried when I got out [of the show] yesterday. People are just so, so kind. I’m in shock still, you know. It’s just unreal. I don’t think they realise the kind of new lease of life I would have from that, that someone that I don’t even know would do that is just, it’s very humbling.”

While it remains to be seen if any of the four listeners are a suitable match for Jillian, she told Ray that she is extremely grateful for their altruism and praised the work of notable figures like broadcaster Joe Brolly and comedian Jarlath Regan for bringing the topic of living donations into the public eye.

Thanks to @RadioRayRTE for interview, I have 4 possible live kidney donors!!! Ecstatic! #CysticFibrosis #ckd pic.twitter.com/IzqBq9U9U4

We are bowled over by the @RTERadio1 listeners who got in touch offering @jilli09 a kidney! All the relevant information has been passed on. @cf_irelandhttps://t.co/3AeAymS7so

Longford is being urged to 'come up roses' for Cystic Fibrosis Ireland on Friday, April 13 and buy a purple rose and help raise much-needed funds for cystic fibrosis (CF) services.

Volunteers will be out and about on the streets of the county, while purple roses will also be on sale in participating Spar stores.

The '65 Roses' appeal gets its name from the way children with this condition are often first taught to say the words 'cystic fibrosis'.

Schools and companies are being especially encouraged to get behind 65 Roses Day by selling purple roses or organising their own 65 RosesChallenges, such as a €6.50 bake sale, cycling 65 kilometres, or swimming a mile - 65 lengths of a pool.

If you’d like to volunteer and lend your support on 65 Roses Day by selling purple roses in your community or workplace, simply call Peter on LoCall 1890 311 211, email fundraising@cfireland.ie or visit 65rosesday.ie

ALSO READ: Longford Person of the Year Jillian McNulty dedicates award to all Cystic Fibrosis sufferers who lost their fight for life

This day last year Orkambi was approved! I campaigned for 2.5 years, it was hard work but I’d do it all again in the morning. Everyone with CF now has a chance to try Orkambi, that was why I fought. What a few years! #orkambi #mymiracle #livesarechanging pic.twitter.com/87MxHqxswF