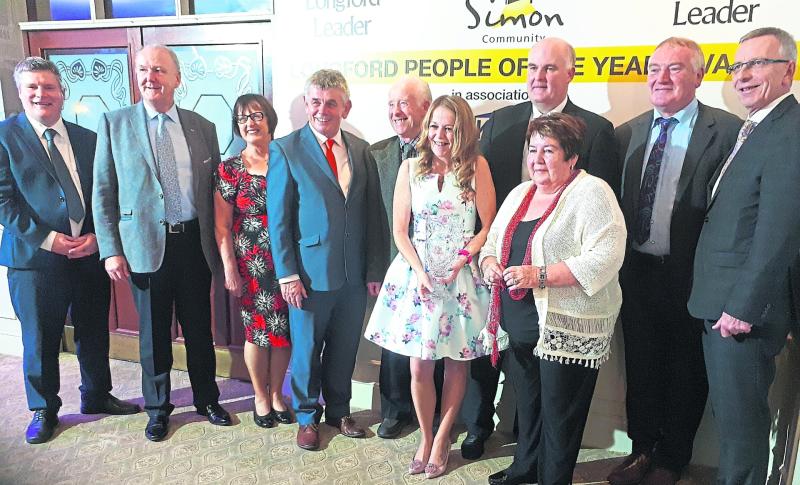 In a packed Longford Arms Hotel on Friday night, Longford town woman, Jillian McNulty, was named the Longford Person of the Year.

There was a huge outpouring of delight and good wishes as the announcement was made and clearly there could not have been a more popular choice.

The awards event was a fundraiser for the Midlands Simon organisation and will assist in their efforts to combat homelessness in Co Longford. This year’s awards were once again sponsored by Frank and Dolores Kiernan of Kiernan Structural Steel.

As the evening moved towards a conclusion, MC for the event, Joe Flaherty, told the guests: “The Kiernan family are steadfastly committed to their community and I know that it was this commitment which inspired Frank and Dolores to come on board as the main sponsors for the awards.

"Frank is acutely aware of the homelessness challenge and his involvement is critical in assisting the Simon community deal with one of the greatest challenges facing the country.”

Jillian McNulty was clearly overwhelmed as she was announced as the winner and it was an especially emotional evening as she had been joined by many of the families who had been to the fore with her earlier this year as she campaigned for the availability of the breakthrough Cystic Fibrosis drug, Orkambi.

Acutely aware of the benefits of the drug Jillian threw herself into a campaign to get access for all Cystic Fibrosis sufferers to the drug.

She led two protests to Dáil Eireann and her high profile campaign also included a number of appearances on the Claire Byrne Live TV show.

A third Dáil protest was also scheduled but on the eve of the march the government announced detail of a breakthrough with the drug manufacturers.

Surrounded by her parents and members of the Cystic Fibrosis community, Jillian thanked the people of Longford, whom she said, had been hugely supportive of her efforts.

This year’s Young Person of the Year award went to the members of the Longford Pony Club showjumping team, who successfully represented Ireland at the International Open Pony Club Show in Cheshire, England recently.