Concern over strained Garda resources in Edgeworthstown highlighted in Dáil 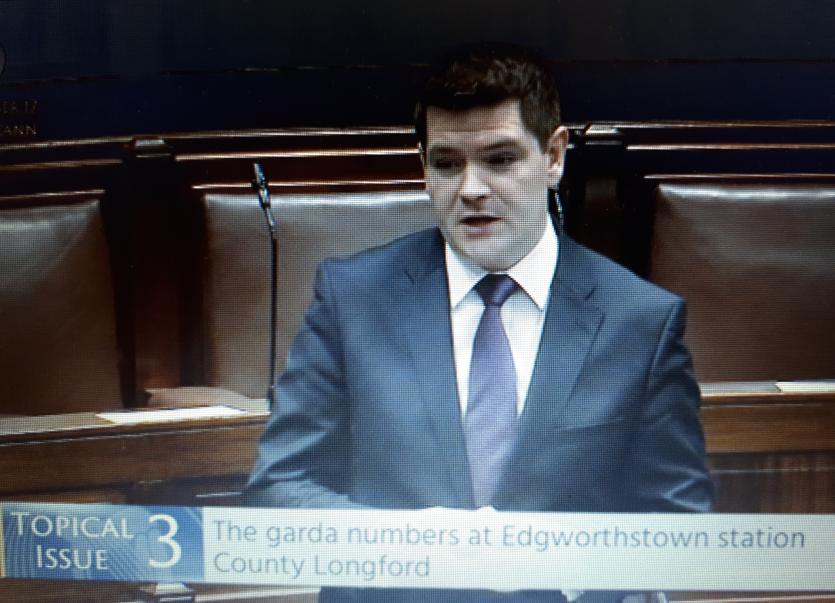 Speaking in the Dáil, Deputy Burke revealed that he has previously been advised in a parliamentary question reply that the number of gardaí assigned to Edgeworthstown is eleven.

However, he believes there is a disparity between the official figures and the situation on the ground, suggesting there are just four and a half gardaí based at Edgeworthstown.

Deputy Burke explained that Edgeworthstown is the second largest town in Longford, with a population in excess of 2,500, and that it is a major centre of road and rail connectivity.

He said there is a growing concern about the increased number of burglaries in the area and he pointed out that the matter of garda resources had been raised with him on many occasions by local councillor, Paul Ross.

Deputy Burke said while he was advised eleven gardaí were assigned to Edgeworthstown that a closer analysis of the facts, and taking transfers out, sick leave and members assigned to other areas into consideration, suggest that there are just four and a half gardaí on the ground.

Deputy Burke added, "I'm assured by Cllr Ross that the gardaí are visible in Edgeworthstown and they are doing an incredible job under strained resources."

He questioned why there is such a disparity between the numbers of gardaí assigned and those that are active on the ground? He also queried the inclusion of sick leave, transfers out or assigned to other areas, in the official figures?

Minister of Justice Charlie Flanagan said it is the Garda Commissioner who is responsible for the distribution of resources, including personnel, among the various Garda Divisions and that he has no direct role in the matter.

Minister Flanagan stated, "The Edgeworthstown Garda Station forms part of the Granard District in the Roscommon/Longford Division. I am informed that the number of Gardaí assigned to the Division on the 31 October 2017, the latest date for which figures are readily available, was 309, of whom 47 members were assigned to Granard District and 11 to Edgeworthstown Station. There are also 9 Garda Reserves and 29 Garda civilian staff attached to the Roscommon/Longford Division.

"When appropriate, the work of local Gardaí is supported by a number of Garda national units such as the National Bureau of Criminal Investigation, the Armed Support Units, the Garda National Economic Crime Bureau and the Garda National Drugs and Organised Crime Bureau. I am also informed that the Divisional Traffic Corps and Drugs Unit also carry out patrols in the area. In so far as the number Gardaí on active duty is concerned the Commissioner has advised that for operational and security reasons An Garda Síochána does not comment on the number of personnel on sick leave in a particular station.

"I am further informed by the Commissioner that since the reopening of the Garda College in September 2014, close to 1,400 recruits have attested as members of An Garda Síochána and have been assigned to mainstream duties nationwide, 10 of whom have been assigned to the Roscommon/Longford Division. I look forward to attending the attestation of another 200 trainee Garda this Friday which will see Garda numbers, taking account of projected retirements, increase to around the 13,500 mark by year end - a net increase of 500 since the end of 2016.

"I am also pleased that Budget 2018 maintains this high level of investment in the Garda workforce and ensure that the vision of an overall workforce of 21,000 by 2021 remains on track. A further 800 new Garda Recruits will enter the Garda College. This will see Garda numbers reach the 14,000 mark by the end of 2018. In addition, a further 500 civilians will also be recruited to fill critical skills gaps across the organisation and to facilitate the redeployment of Gardaí from administrative and technical duties to front-line operational duties. There are plans to strengthen the Garda Reserve with new Reserves expected to commence training early in 2018.

"This focus on investment in personnel is critical. The moratorium on recruitment introduced in 2010 resulted in a significant reduction in the strength of An Garda Síochána. We are now rebuilding the organisation and providing the Commissioner with the resources needed to deploy increasing numbers of Gardaí across every Garda Division, including the Roscommon/Longford Division, in the coming years."