'No man is an island. And those in the shadows are as much due this award as I am.' 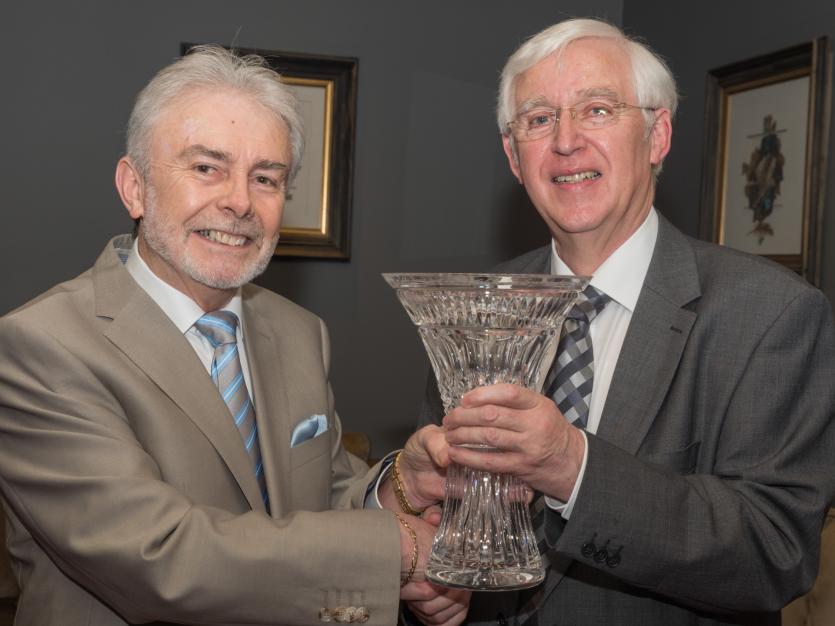 Denis Glennon, former councillor, author, community activist and the first lay principal of St Mel's College, said he was 'deeply honoured' to be presented with the Longford Person of the Year Award 2018 award at the 64th Longford Association in Dublin, annual dinner dance and gala awards in Moran's Red Cow Hotel on Saturday.

He congratulated Liam on completing 316 marathons, almost 8,300 miles, and that for every mile he completed, he raised between €25 and €30 per mile for charity. "That is some achievement," remarked Mr Glennon.

Accomplished traditional Irish musician and Lanesboro native Pádraig Donlon was also presented with a Special Recognition accolade. Mr Glennon explained that the relationship between the Donlon and Glennon families stretched back over seventy years. "Pádraig, you are an absolutely outstanding musician, and you more All-Ireland wins than most Longford footballers put together!" He also poignantly remembered the late renowned uilleann piper, Liam Óg O'Flynn.

In 1998, Mr Glennon's late uncle, Paddy Glennon, was honoured as the Longford Association in Dublin Person of the Year and the 2018 winner said he was humbled to follow in the footsteps of his uncle, 'who was held in great esteem in our family'.

He extended a special welcome to his Uncle Paddy's grandson, Patrick, 'who wasn't born when the last award was given out to a member of my family' and he spoke of his pride, the fact that cousins Pat, Mike and Billy Glennon are main sponsors of Longford GAA.

Mr Glennon explained that his late brother Eamon and his wife Breda were 'loyal supporters of this organisation' and it was who introduced him to the Longford Association in Dublin.

He commented, "In twenty years, life and time has plundered many lives in my own family and I remember all those tonight. It also occasions like this that gives me a deep appreciation of how important is to celebrate and have events that celebrate life and friends and family."

Pointing out that he may well be in the spotlight, Mr Glennon stressed that the spotlight should widen out and give credit to the unsung heroes, 'those in the background and shadows who are as much due this award as I am'.

Principal of St Mel's College from 2002 to 2008 and author of 'Selected Memories, St Mel's College 1865 - 2015', Mr Glennon said poets and writers can say more profoundly what you want to say yourself and he quoted John Donne. "No man is an island, Entire of itself, Every man is a piece of the continent."

Mr Glennon added, "The whole essence of humanity is to be able to cooperate to achieve anything because I certainly would have achieved nothing in my life without the support and help of so many people that have helped me down through the years."

Also Read: All set for a big Longford night in The Capital