The first alarm was raised at 11.04 am when two people on board a 32ft motor cruiser ran aground north-west of Inchbofin Island near the eastern shore of the lake.

Weather conditions at the time were difficult, with heavy rain and a strong force 4 breeze from the north-west. Visibility was poor and there was a moderate swell on the lake. 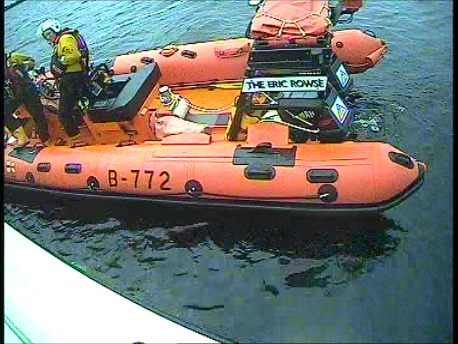 The lifeboat crew were alongside the casualty vessel at 11.31 am, checking that all on board were uninjured and wearing life jackets. The lifeboat crew established that the vessel was not taking on water before towing the vessel off the sandy shoal to safe navigable water.

The boat’s equipment was confirmed to be in good working order and the two people on board were able to continue their journey to Lanesboro at the north end of Lough Ree.

The lifeboat crew returned to the Lifeboat Station at Coosan Point where the shore crew recovered the lifeboat and prepared The Eric Rowse for service once again by 12.30 pm.

At 3.15 pm the volunteers were alerted again, this time to assist eight people aboard a hire cruiser aground north of the Black Islands at the north-east shore of Lough Ree.

The lifeboat crew reached the cruiser at 3.49 pm and proceeded to conduct the usual checks before towing the cruiser to safety.

The eight people on board then continued their journey south to Athlone, and the lifeboat crew returned to the station, where The Eric Rowse was reported ready for service again at 4.50 pm.

Speaking after the lifeboat returned, Lough Ree RNLI Lifeboat Operations Manager, Tony McCarth, said “We were happy to be able to assist in both callouts today and to help these ten people continue to enjoy their weekend on Lough Ree. Heavy rain leads to poor visibility on the lake, which can make locating navigation markers difficult, even in calm conditions. We remind all users of the lake to ensure they check the weather forecast and seek local advice on likely conditions on the lake before leaving harbour."