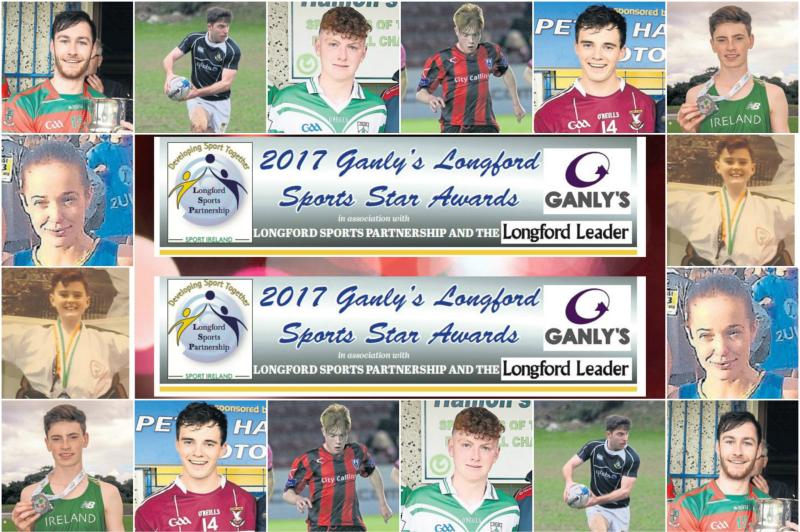 The Ganly's Longford Sport Star Awards, in association with Longford Sports Partnership, will be presented at a gala awards ceremony on Friday, December 1 in the Sin Bin Event Centre, Longford Rugby Club.  Tickets for the event, costing €35, are on sale from the Longford Leader, tel: 043 33 45241. 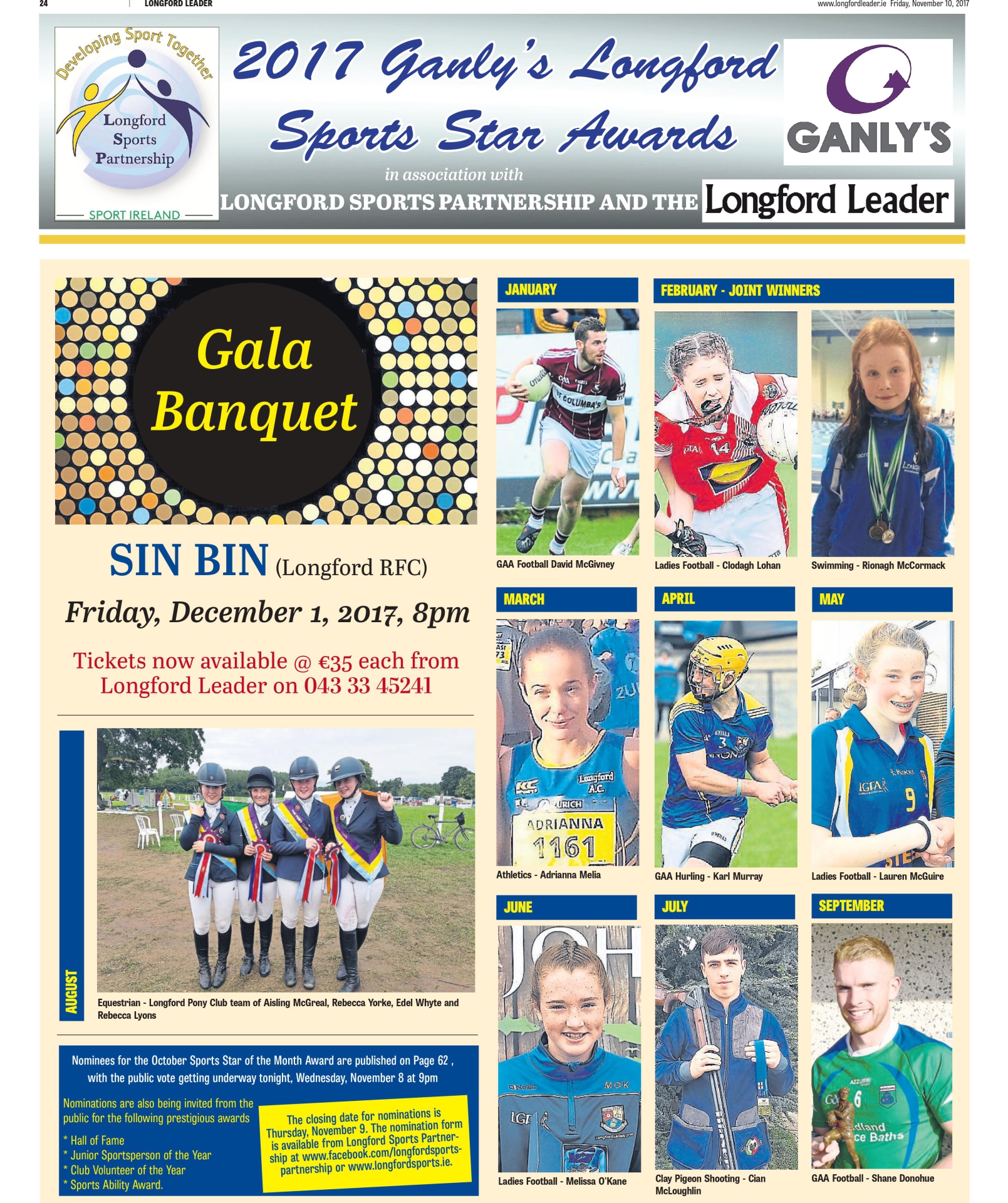 Congratulations to the nine monthly winners already voted for by the public;

Voting for the October winner concludes next Wednesday, November 15 at 9pm.

Here is a brief profile of each nominee;

GAA Hurling: John Mulhern
Wolfe Tones Mostrim showed great character in storming back to beat Longford Slashers by a single point (2-11 to 2-10) in the Senior Hurling Championship Final, thus completing a tremendous five-in-a-row, and particularly impressive in their latest success was attacker John Mulhern who registered 1-4 on his way to winning the man of the match award.

Rugby: Joe McGowan
Newly promoted Longford Rugby Club have achieved some great results in the Leinster League Division 1B this season with consistently accurate kicker Joe McGowan playing a leading role, clearly reflected in the 18 points he clocked up in the excellent 33-30 away win over Kilkenny and he surpassed that fine feat to score 23 points in the 28-21 home victory against Clondalkin.

GAA Football: Cian Dooner
Cian Dooner made a major impact for Killoe in their hard earned victory over the Carrickedmond/Legan/Kenagh/Moydow amalgamation in the Minor Football Championship Final by the minimum of margins, 0-11 to 0-10. Deadly corner-forward Dooner fired over eight points (four frees) and received the man of the match award for his excellent display.

Soccer: Aodh Dervin
A product of the Longford & District Schoolboy Soccer League, Aodh Dervin graduated to the Longford Town FC first team squad this season. The promising local player made a significant breakthrough with a few appearances in the closing stages of the Airtricity League First Division campaign including the 1-0 home win over Wexford in the final fixture.

GAA Football: Rian Brady
Mullinalaghta St Columba’s won the Senior Football Championship for the second year in succession with Abbeylara the victims again in the title decider. Classy corner-forward Rian Brady was always dangerous in a sharp attack, firing over four points (all from play) in the county final, and he collected the man of the match award for the very prominent part he played in another Connolly Cup triumph.

Athletics: Cian McPhillips
Cian McPhillips is well established as one of the best young athletes in the country and he has enjoyed tremendous success this year. His latest triumph came in the Connacht Cross Country Championships staged in Calry, Sligo when he won the U-16 Boys race in the colours of Longford Athletic Club. It was Cian’s 6th Connacht Cross Country title in a row as he grows from strength to strength in his sport.

Karate: Jamie Donohoe
10-year-old Jamie Donohoe from Legan won a silver medal at the IKU World Karate tournament at the Hub in Kilkenny. Jamie has been practicing Matsubayashi Karate since the age of four and in the last two years he has competed at a very high level, nationally and internationally. He is currently the All-Ireland champion for the last two years running. He also won the Belgian WUKF Open in 2016 along with representing his country in Italy at the European WUKF Championships and the Malta Open in February 2017.

Athletics: Adrianna Melia
Adrianna Melia, representing Longford Athletic Club, literally ran away from the field to win the Senior Ladies race in a most convincing manner in the Connacht Cross Country Championships staged in Calry, Sligo. From the start she moved into the lead and gradually pulled further and further ahead to produce what was probably the biggest winning margin in the day’s racing on her way to claiming the Connacht title. 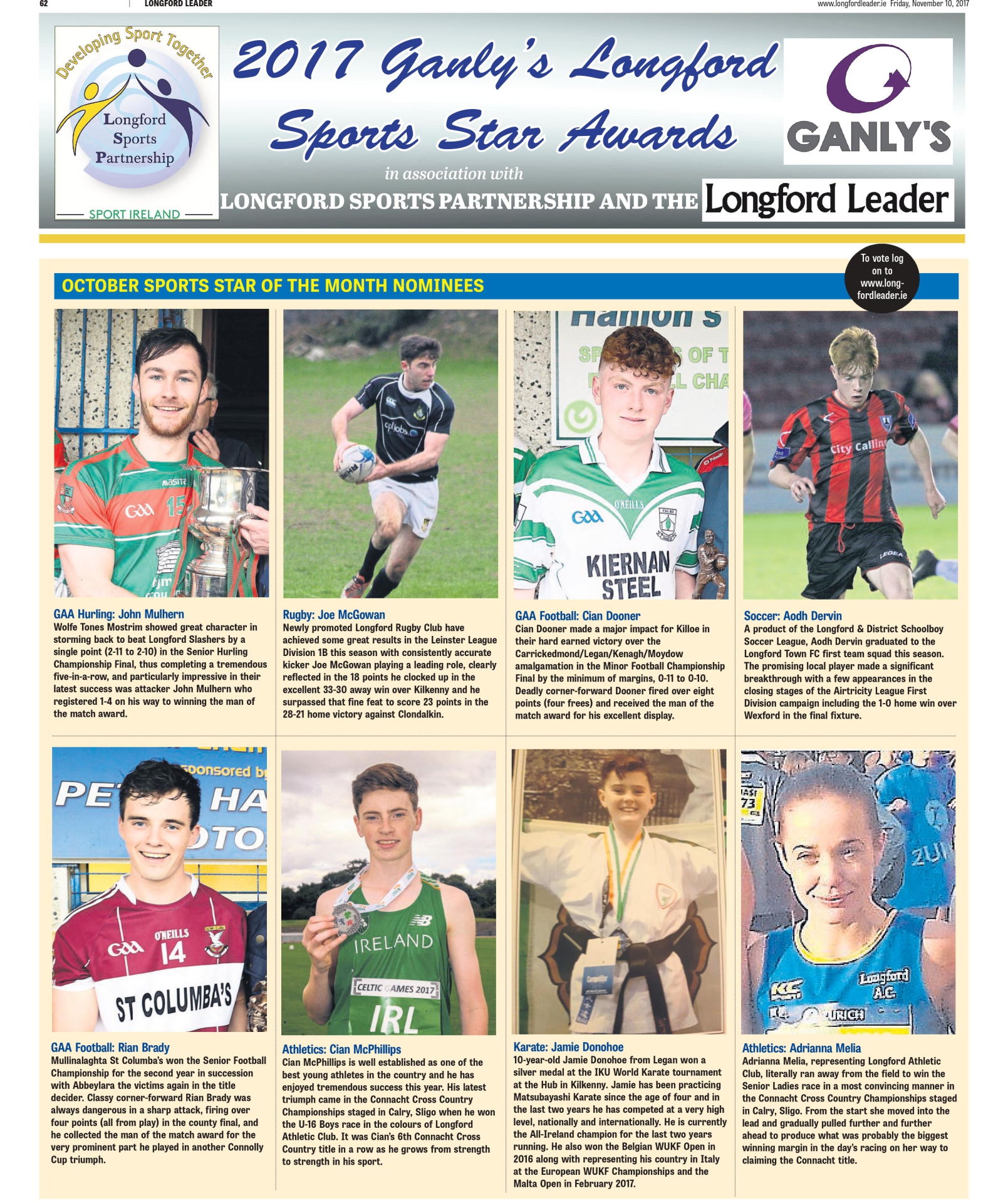