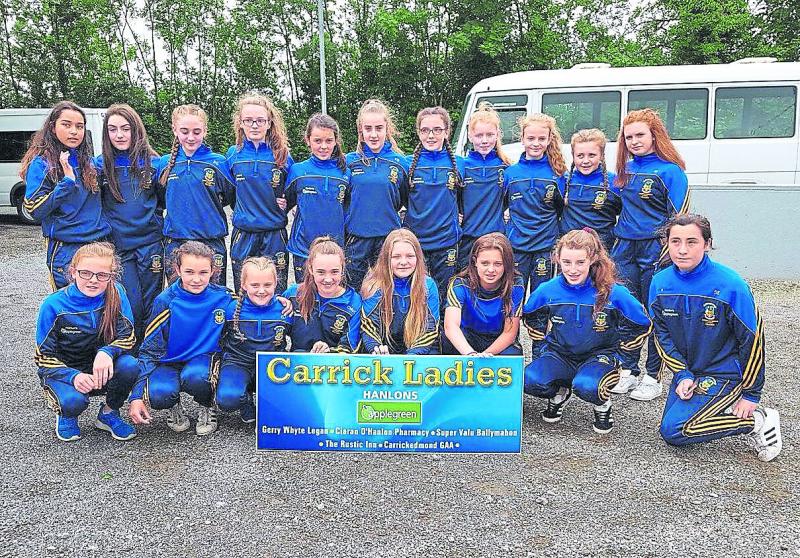 The panel and their coaches were hosted for the weekend by Bailieboro GAA club in Cavan.

The girls played their first match in the group stage on the Friday evening in Drumgoon. After a very tough and exciting game the Carrick girls ran out winners by one point, Carrickedmond 1-5, St Brides (Louth) 2-1.

Next up for Carrickedmond was a game with the local club Drumgoon. Again the Carrick girls played excellently, emerging as 4-7 to 1-1 winners.

This win, however, came at a cost for Carrickedmond as they lost influential midfielder Lauren McGuire after only five minutes with a nasty hand injury and this ruled her out of the rest of the competition.

With two wins from two, the Longford Féile champions appearing in the national competition for the first time, were set up nicely for their third group game on Saturday morning against their hosts, Bailieborough. Again, the Carrick girls produced some excellent football, and they registered an emphatic 6-6 to 1-0 victory.

This win secured top spot in the group and saw Carrickedmond progress to a Division 4 Saturday afternoon quarter-final against Bridgewater Gaels (Cavan) in Drumgoon. This proved to be a much sterner test for Carrickedmond but they rose to it and gave their supporters plenty to cheer about as they won by 1-6 to 0-3.

With a semi-final berth now guaranteed, the girls enjoyed the Saturday evening activities and hospitality provided by their host club Bailieboro and the host families.

There was an early start on Sunday as the semi-final against Moneyglass (Antrim) was fixed for Shercock with a 10:30am throw in. A great crowd was in attendance for this crunch game and at the interval the sides were deadlocked at 1-5 apiece.

Carrickedmond continued to perform bravely during the second half, however the exertions of a long weekend and the loss of a few girls through injury caught up with them and they ultimately went down on a 2-5 to 3-7 scoreline. Moneyglass went on to win the Division 4 Féile title so Carrickedmond certainly weren’t that far away.

Great credit must go to this wonderful panel of girls who represented their club, parish and county so well over what can only be described as a memorable weekend of football. Many friends were made and this is what the GAA Féile and taking part in this national competition is all about.

Congratulations to mentors Keith, Eamon and Michelle who worked so diligently with the players over the last twelve months.

The club would like to thank the girls for the wonderful commitment and football enjoyment they provided for everyone.

hanks to Keith, Eamon and Michelle for their commitment in preparing the team so well. Thanks to all the supporters who travelled to the Féile to cheer on the girls. This support was so important to the team.

A special thanks to the team’s main sponsor Patrick Hanlon, Apple Green, Ballymahon who sponsored their fabulous gear.

hanks also to all the other sponsors - your generosity is much appreciated. A big thanks also to everyone who helped make the Féile weekend a one to remember for many years to come, especially to Therese Mulligan who organised the weekend so professionally and without any fuss. Well done Therese.