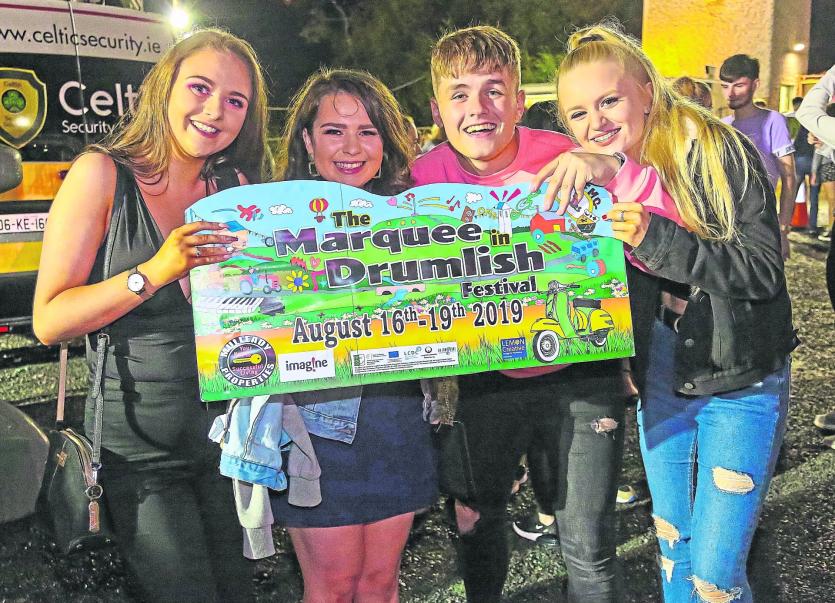 Even the mixed, indeed in parts unseasonal, weather didn’t substantially negatively affect the attendances on the tenth anniversary of The Marquee in Drumlish Festival.

So popular has it become that this annual festival has firmly etched itself in the Irish calendar of events each year, and this year again friends from the capital who attended came away well satisfied.

It was obvious on this occasion, as in all previous years since the beginning, no expense was spared on entertainment which was of the highest quality.

Over four nights dancers were kept moving energetically to the beat of excellent local bands Brave Giant, Top Shelf, Cronin and the best country music on the Irish scene, headlined by Derek Ryan on Saturday night; he followed the lively and entertaining Robert Mizzell.

Opening the show on Saturday was a young rising star from Galway, Matthew O’Donnell, who is attracting a large, young following. Incidentally, he and members of his new band were at the venue before 6pm, although not on stage until 9pm, giving a small insight into the commitment and investment in the time involved in the lives of entertainers.

Local musicians, the Cronins, who headlined a great line up on Sunday night, are an annual presence at the festival and are of international standard.

Monday, the annual Declan Nerney night, provided more top level country music. Mick Flavin’s wonderfully melodious country voice soared with ‘Home To Donegal’ as slightly late comers walked up the school road towards the marquee. Some were re-enacting an up-to-date version of crossroads dancing in response, adding to the atmosphere, or perhaps warming up against the chill of the night.

Mike Denver and his band were, to say the least, impressive and Declan’s legendary energy on stage and his highly recognisable and danceable-to tunes, coupled with his superb band, brought the festival to a glorious end, producing some dance moves on the floor that obviously had been spontaneously invented as the night progressed!

Everything ran like clock work resulting from the helpfulness and friendliness of the volunteers and, in large part also from the professionalism of the security people and the friendly and not-too- intrusive approach of the Garda. Another huge thumbs up to Packie Duffy and his festival committee for another hugely successful event, marking the 10th anniversary in style.