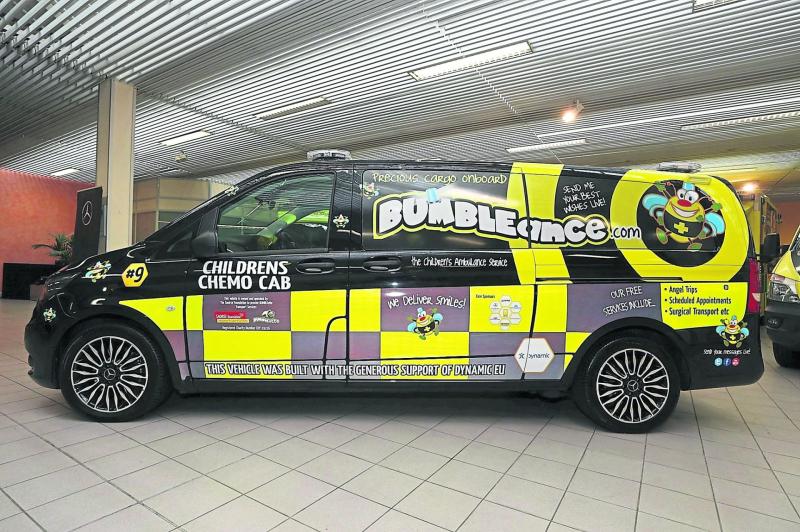 A sample of one of the BUMBLEance fleet, used to transport ill children

The Longford vintage club was first established in 2005, as a way for vintage motoring enthusiasts to get their ‘fix’ in a friendly environment among friends.

They previously had their base in the village of Drumlish.

Club secretary Miceal Nolan explained, “It was established by a few people around Longford and the Drumlish/Ballinamuck area.
“They all had a common interest and decided to set up a club.”

Soon the club moved into Longford town, where Connolly Barracks became their new and forever home.

“We were based in the rugby club for a while first, but then we became established in the Barracks where we now have our clubhouse and ,.” Miceal stated.

Their ethos is to provide a safe, comfortable and fun method of transportation for Ireland’s youngest patients as they travel from the safety of their homes to and from hospice services, hospital appointments and treatment centres.

The vehicles the children get to travel in are both safe and fun, with a bright yellow exterior and interior only one could dream of. Each ‘BUMBLEance’ can cater for one child, two parents and a paramedic.

As well as having everything a normal ambulance would, each Bumbleance is equipped with on-board lockers, a fridge, food and drink, but it doesn’t end there.

As well as this and to keep the younger ones entertained, each BUMBLEance has a 19 inch LED TV, WiFi, a Playstation 4 and games, DVDs, books, social media streaming, Netflix, an Ipad Air, sensory lighting, Beats headphones, an Apple TV, Apple Music and colouring utensils.

The service was first launched six years ago in September 2013. It is owned by the Saoirse Foundation and works in partnership with the National Ambulance service. They provide three types of service.

This provides journeys for those who need medical intervention. The final service provided is a driver-only service.

They also recently carried out a trial run on a potential new service, BUMBLEair, emergency helicopter transportation for children.

As well as this, the team behind BUMBLEance also provide an ‘Angel Trip’ service. This caters for the parents of terminally ill children by helping them make the final journey that little bit easier.

“BUMBLEance was created by parents who understand the struggle of caring for and transporting a sick child.

“Our aim is to distract, comfort and entertain Ireland’s youngest patients as they travel to and from treatment centres nationwide and to ensure the smoothest and safety journey possible, for both carer and patient, from home to destination,” the team of BUMBLEance explain on their site.

If people want to donate to the BUMBLEance cause you can do so by texting BUZZ to 50300 to make a €4 donation, with BUMBLEANCE receiving at least €3.60 of that cost.

You can also donate by visiting the official website at www.bumbleance.com
/product/make-a-donation/

Miceal explained, “Anyone can get in and have a look around the ambulance and see it. It's a great cause.”
He concluded by urging people to help out this very worthy cause if at all possible and show their support in big numbers at the upcoming show and fun day, Sunday June 2.

For those who would like to get involved with the Longford vintage club itself, all you have to do is contact the team.
The cost to become a member is €25 for the year, but members can avail of a discount on insurance with FBD through the club.

They meet on the second Wednesday of every month and are always seeking members who share their enthusiasm for vintage and classic vehicles.