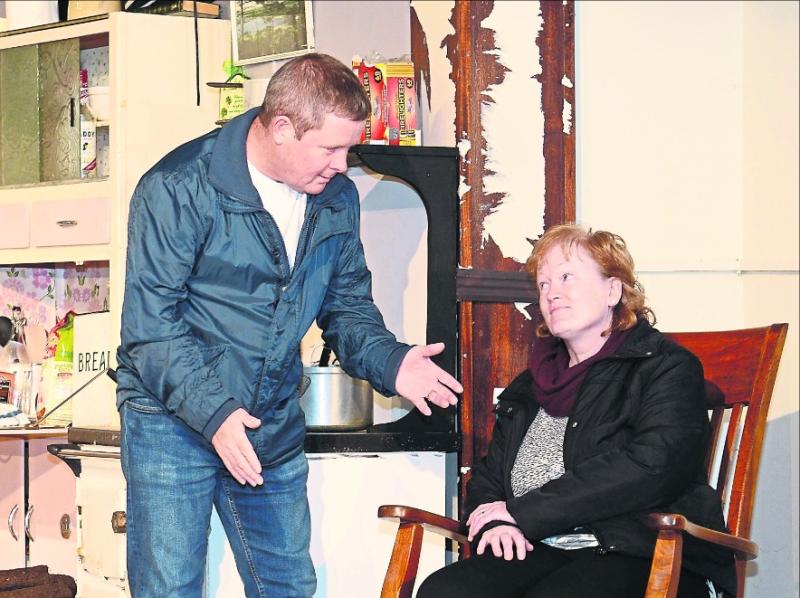 This year, after months of rehearsals, and busy behind-the-scenes preparations by an enthusiastic crew, the Newtowncashel Drama Group proudly presents Martin McDonagh's multi-award-winning 'The Beauty Queen of Leenane'.

The presentation of this modern classic of Irish theatre coincides with the group's celebration of it's 100th successive year, which is something of an achievement by any standards.

The group began staging productions in 1918, in the Thomas Ashe Hall, which was built on the site of the former Cornadough National School.

The building of the hall, beginning in 1917, was subject to controversy in itself, having been funded by the Sinn Fein Party, much to the dismay of the Irish Party.

Though, differences aside, and with teams of up to twenty men volunteering on a daily basis, the hall was completed in 1918, and was packed with attendees for a dance on it's opening night.

Through the twenties, with supportive efforts from members coming from as far away as Rathcline and Ballymahon, the group evolved into the Cashel Dramatic Society, and by the thirties, the Newtowncashel Dramatic Club (as it had come to be known) staged up to three plays each year, right up until the mid-forties, often performing on St Patrick's night.

But back to this year's production...

'The Beauty Queen of Leenane,' billed as a comedy, though with dark undertones, focuses on the turbulent relationship between Maureen Folan and her elderly mother, Mag, who live an uncomfortable existence together in Connemara.

Maureen, a forty year old spinster, yet to experience her first true love, feels heavily burdened by her mother's feigned (or so Maureen thinks) invalidity.

An opportunity for a romantic encounter comes in the form of Pato, a London-based construction worker, whom Maureen meets at a party, despite Mag's attempts to thwart Maureen's social endeavours by burning the invitation.

Upon Pato's return to London, through written communications, which are intercepted by Mag, the play explores the complications of Maureen and Pato's relationship, culminating in Pato's announcement that he is to emigrate to Boston.

Mag, through a series of revelations and deceptions, attempts to disrupt Maureen's departure to the United States with Pato, and as the tension between them builds, their fraught relationship can only end tragedy...

'The Beauty Queen of Leenane,' produced and directed by Dermot Healy, will run for three consecutive nights on November 16, 17 & 18. Curtain is 8.30pm every night at 'The Hill,' where the group is currently based.