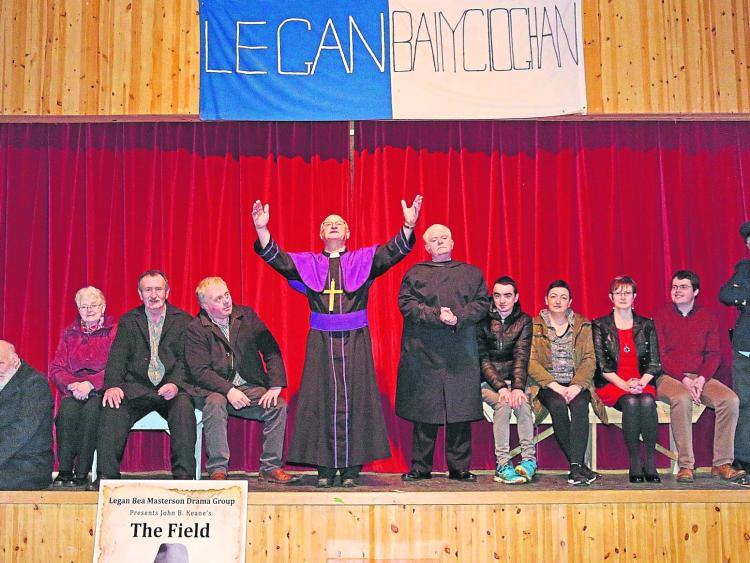 The cast of 'The Field' at rehearsals last weekend. Photo by Shelley Corcoran

John B Keane's 1965 play 'The Field' has always been popular among theatre-goers and film buffs alike - especially following the 1990 film adaptation of the play, starring Richard Harris, John Hurt and Sean Bean.

Now this wonderful Irish play is coming to Longford as the Bea Masterson Amateur Drama Group prepares to stage it in Legan.

Directed by Vanessa Flood, The Field will come to the Aurora Hall in Legan for four nights on March 1 to March 4.

“It's based on the hunger for land and the greed,” said Colm Ward of the Bea Masterson Group.

“It deals with the bullying methods used to acquire land, and how people threatened anyone encroaching on their land.”

In John B Keane's famous play, the rugged Bull McCabe has spent five years of hard labour cultivating a small plot of rented lant and nurturing it from barren rock to fertile field.

So, when the elderly owner of the field decides to put it up for auction, the Bull McCabe believes that he has a claim to it.

What follows is the story of how the McCabes bully and intimidate the townspeople out of bidding in the auction.

But when Galwayman, William Dee, arrives from England with a plan to cover the field with concrete, all hell breaks loose.

The play will take place at the Aurora Hall, Legan, from March 1 to 4 at 8pm sharp each night, with doors opening at 7.30pm.