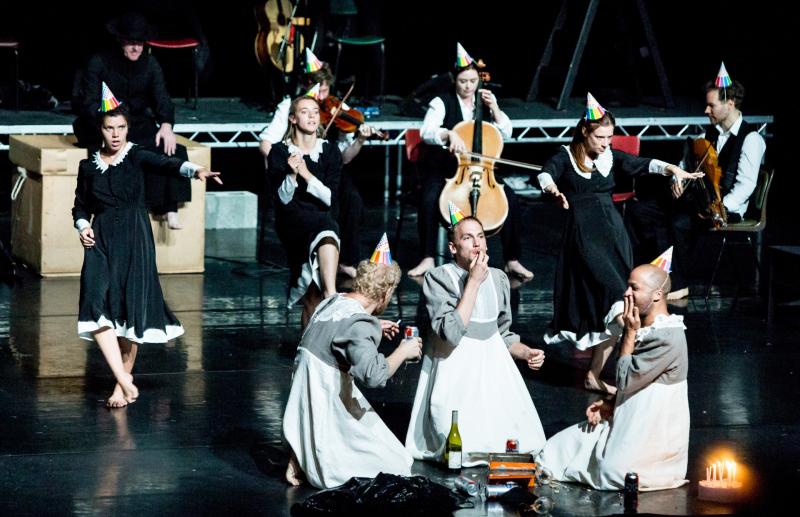 Pyotr Ilyich Tchaikovsky's mesmerising ballet 'Swan Lake' has been around for close to 150 years, adapted and readapted countless times over the decades.

One adaptation you won't want to miss, though, is Michael Keegan-Dolan's 'Loch na hÉala', which is set in Longford, written by a Longford man, and even features a mention of the Longford Leader, if only for a minute!

Eager to get a sneak peek at this highly-acclaimed production ahead of its Backstage Theatre appearance, this Leader journalist headed to the Roscommon Arts Centre to suss it out.

Haunting, disturbing and utterly beautiful, this performance will stay in your mind days after you've left your assigned seat.

Filing into the theatre, there is an eery and unusual silence in place of the chatter you would expect from the gathered theatre-goers.

The silence is broken by bleating noises, the source of which is revealed when the stage comes into view.

As the audience members take their seats, the stage is completely empty... that is, except for a middle-aged man tethered to a heavy block by a rope around his neck.

Oh... and he's completely naked, aside from a pair of white underpants.

Bleating like a goat, he holds the attention of the hushed audience, as he half-heartedly tries to free himself from his tether.

The goat man is popular actor, Mikel Murfi, who sets the tone for the rest of the performance.

He is soon accosted by four men in black who grab him and perform a strange type of ritual, while he struggles in their grip.

Slowly but surely, the goat is dressed and starts to act more like a man, until he's sitting on a chair, scoffing biscuits, drinking tea and smoking cigarettes.

One cup of tea later, he's ready to break into the tale of Jimmy, a shabbily-dressed man in his thirties, who suffers from clinical depression since the death of his father.

What follows is a hauntingly beautiful infusion of dance and music as Murfi, through the characters of a crooked policeman, a corrupt councillor and an abusive parish priest, leads the audience through the performance.

Jimmy's wheelchairbound mother, Nancy, has decided to replace the family home with a council house - a decision that plummets her unemployed son further into the depths of depression.

In fact, when she gifts him his father's shotgun for his birthday, Jimmy decides to head down to Swan Lake - not to hunt swans, but to kill himself with the gun.

While at the lake, he encounters a beautiful flock of swans, one of which is Fionnuala - a girl who has been missing for some time following abusive treatment by the parish priest.

She and her three sisters live their lives as swans, cursed by the priest after they tried to reveal his darkest secret.

This Children of Lir aspect brings a whole new meaning to the story as Fionnuala and Jimmy engage in a beautiful piece of dance, filled with fearful touches and a shared sense of pain and grief.

This exquisitely raw dance performance is harshly contrasted during the birthday party that Jimmy's mother Nancy throws him in the hope of finding him a nice girl to settle down with.

The theatre is filled with screeches of laughter from the 'eligible' ladies of Longford - three of which are men in dresses and lipstick - as they overindulge on alcohol and cigaretts, and parade themselves in front of Jimmy in a disturbing and grotesque manner that leaves the audience - and Jimmy - uncomfortable, but unable to tear their eyes away.

Much like the original story of Swan Lake, this one ends in the death of our protagonist.

But the sadness and grief of everything leading up to Jimmy's death is replaced with scenes of pure, visceral joy as the cast performs a mesmerising dance around the stage, spewing feathers around with a sort of heavenly beauty.

The lights, combined with the white of the feathers and the joyful groove of the musicians and dancers as they bound around the floor brighten the stage, building up to a climactic euphoria, ending the performance on a high, and earning the cast a standing ovation from the Roscommon audience.

Michael Keegan-Dolan has created something spectacular out of Swan Lake, breathing new life into an old ballet by adding in Irish folklore and a Longford setting.

The characters portrayed by Mikel Murfi, the clever inclusion of Irish folklore, combined with the ominous and exhilarating Irish-Nordic folk music makes Loch na hÉala one of the most astounding and breathtakingly beautiful adaptations of Swan Lake to date.

Presented by Nomad Theatre Network, Michael Keegan-Dolan's 'Loch na hÉala' will come to the Backstage Theatre this April 6 and 7 as part of its Spring 2018 tour.

Tickets are available from www.backstage.ie, 043 33 47888, or the Backstage Theatre box office.

Spring into the new season with Longford's Backstage Theatre