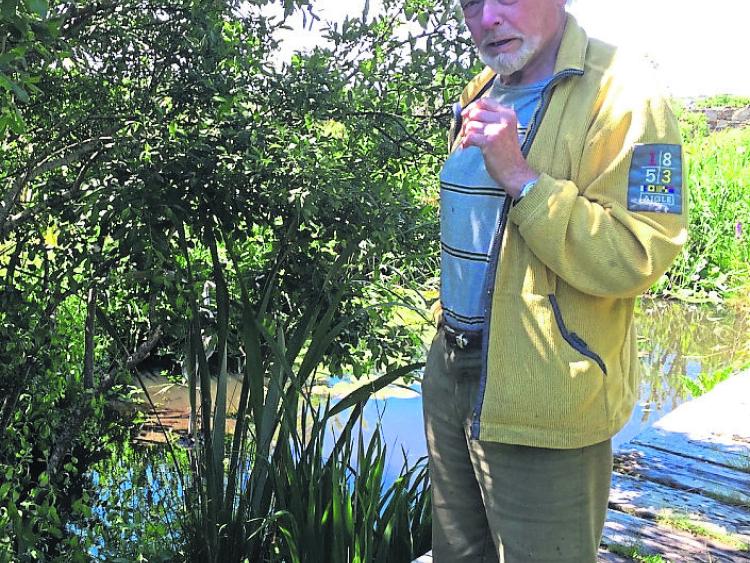 Artist, Kenneth Webb who will give a talk at the opening of his exhibition in the Purple Onion this Friday

If you take a trip to any of the larger towns and cities around the country, you’ll find no end to the number of quirky, unique restaurants you can choose from.

But when you find something quirky in the more rural parts of the country, it’s a lot more special.

The Purple Onion in Tarmonbarry is one such rural gem. Opened in 2003 as a bar/restaurant, the Purple Onion has since added a beautiful art gallery, providing a very unique dining experience.

In fact, this Friday, November 3, Pauline Roe and Paul Dempsey will be opening an art exhibition by internationally known artist, Kenneth Webb.

Kenneth Webb was born in London in 1927. After studying at the College of Art Gloucester and Cheltenham, he moved to Ireland, and in 1953 he was appointed Head of the Painting School, Ulster College of Art.

In 1957 he founded the Irish School of Landscape Painting and has since lectured for Queen's University Belfast, and in the Tate and National Galleries of London.

The Second World War profoundly affected his life, with the Bristol Blitz destroying first his father’s factory and then his home.

His father, mother, and 18-month-old brother sheltered in the broom cupboard when a parachute mine obliterated the house.

In his own words, they were dug out ‘eventually’.

Seeing such loss of life, he decided at this early stage that his life, which was spared, should count.
Webb’s work is deeply personal, inspired by landscapes including his private garden and the rolling green of Connemara, home of his ancestors.

His paintings are a colourful exploration and celebration of the natural world, with his goal throughout his long and distinguished career to push the boundaries with obsessive experimentation with colour.
He has exhibited widely both in Ireland and abroad; the prestigious London gallery, Gladwell Patterson of Knightsbridge, held a very successful show earlier this year.

An exhibition is planned for New York next year.

His paintings have a 'magical' other worldly feel, evoking a deep response from the viewer.
The exhibition includes many new works with older work dating from earlier decades, poppies, farm buildings, bogs, figurative, dramatic and a couple of surprises, all represented in this eclectic show.

Paul Dempsey was always a lover of art andin 2006, himself and Pauline decided to convert part of the Purple Onion into an art gallery.

“Up to recently, we exhibited mostly paintings and sculptures but, this year, we held an exhibition of photography - a medium which we will continue to explore,” said Paul.

“We have also had quite a few group shows and, believe me, when you get a group of artists together... well, best not go there, it can be interesting.”

Very early on, Paul and Pauline decided that they would only display what they liked, but they were not going to be constrained by any one discipline. So you’ll often find a traditional landscape right beside a more modernist piece.

“I want to hang some nudes and edgier work in the bar but spoilsport Pauline won't let me, she thinks about some people’s sensibilities; sometimes she is no fun,” Paul jokes.

'Connections', an exhibition by Kenneth Webb, opens in the Purple Onion gallery on Friday November 3 at 7pm with a talk from the artist.