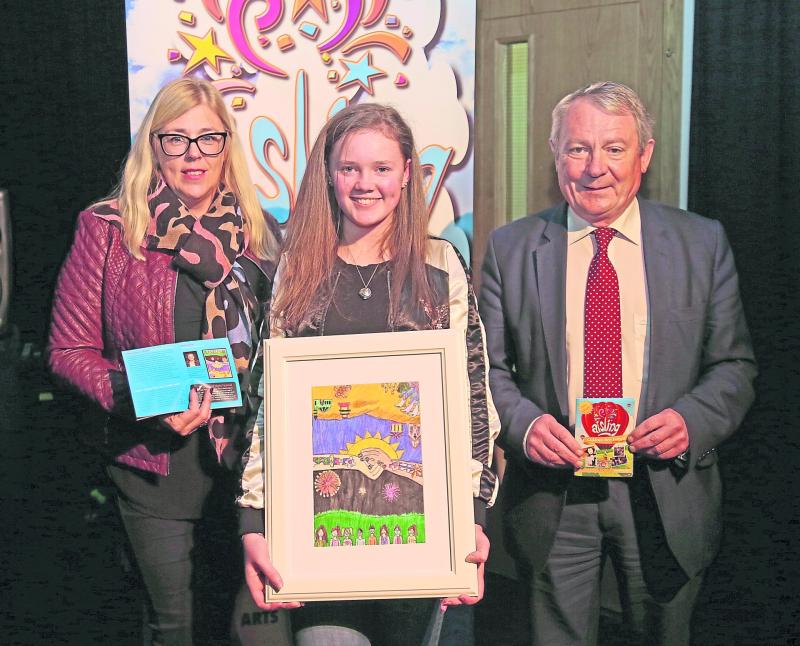 The festival was officially launched on Thursday, October 12, last and kicked off with a prize-giving ceremony for the children's art competition.

The competition itself saw a record number of entries this year, according to Clare Macko of the Aisling Festival Committee, who said that over 1,700 entries came in from children and teenagers across the county.

At the launch, Ms Macko pointed out that the theme of this year's festival is 'The Future is Bright', adding that a quick glance around the walls of the Canal Studio in the Backstage Theatre would prove that “our young artists here have done an exceptional job” in portraying that.

Prizes were sponsored by Farrell & Coy, Longford's only art shop, and Agatha Farrell was on hand to hand out the bags of goodies to the winners.

In the Special Category, Salman Smith from St. Teresa’s NS, Killoe, was the winner, with Oran O’Hara, from Aughnagarron NS a close runner-up.

The winner of the 3 to 5 age group category was Emily Farrell from Scoil Samhthann, Ballinalee, with Isla Brady from St. Mary’s NS, Drumlish coming second.

First place in the the 6-8 category went to Sara Murphy, from Aughnagarron NS, while Layna Donohoe from Scoil Mhuire, Newtownforbes, was the runner-up.

Ciara Farrell from Meanscoil Mhuire and Simona Lapina from Templemichael College came first and second respectively in the age 15 to 18 category.

And the overall winner of this year's competition was 12-year-old Karolina Wozniak, from Meanscoil Mhuire, with her beautiful artwork.

The Aisling Festival will take place from October 22 to October 28.

To read all about what's in store during the festival week, find our 16-page supplement in the middle of this paper.