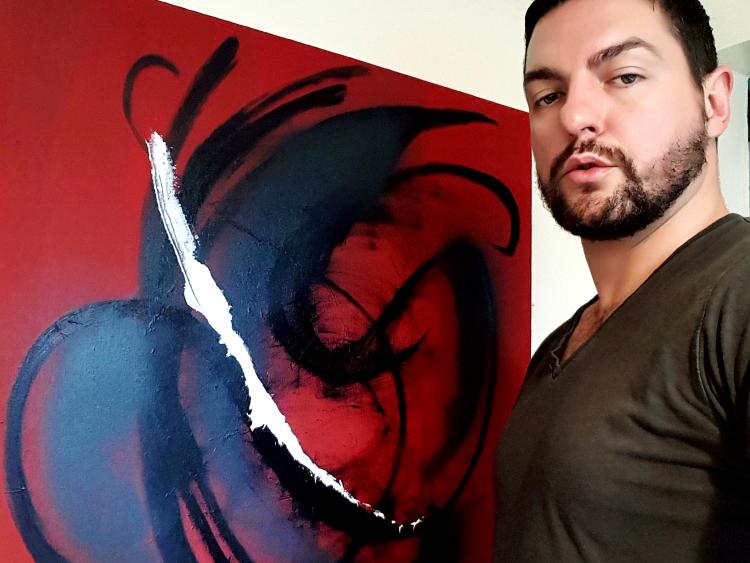 Cruthú Arts Festival kicks off this evening (Wednesday) with the official opening of an art exhibition by Ambroise Donnelle.

The exhibition, entitles 'Reborn', is inspired by Ambroise's mother, a lady who was born into the Castlepollard Mother and Baby Home.

“We are alike in so many ways; she even likes to dabble in pastels and watercolours occasionally. So the apple doesn't fall far from the tree.”

When Ambroise was a child, he often showed his mother his crayon drawings and felt a sense of contentment when she replied with a 'that's lovely, well done!'

He has always been close to his mother and, when he was a kid, he learned the story of her heritage.

“I remember my mother sitting us all down when we were kids and telling us she was adopted,” he said.

“At first I didn't understand her and asked 'So you're not my real mummy?'

“'No,' she said, 'Your granny and granda are not your biological grandparents'.”

She went on to explain that she was born in a Mother and Baby home and left in an orphanage.

“Oh ok can I go outside and play now?” was Ambroise's response at the time.

But as he grew older, he would understand in much finer detail what the word 'adoption' meant and how it affected his mother.

“All we knew is that the grandparents we had were truly amazing and had a special way about them that was second to none,” he said.

“I know that some of us say that about our granny and grandas all the time but they truly were the best!”

As the years rolled by, Ambroise became more and more interested in his mother's past and started to research his biological family.

He soon discovered that his mother was moved from Castlepollard to Nazareth Mother and Baby home in Belfast, but nobody knows why.

“She had severe malnutrition due to neglect and when my granny and grandad went to collect her, one of the nuns was reported to have said to my grandmother: 'You can take her home but you won't have much time with her!'

“We also have learned that my mother has four sisters and a brother. One of the sisters, my aunt Rita, resides in Philadelphia because that's where my biological grandmother had met her new partner in the 1960s and must have decided to settle there.

“Rita and I have joined forces and, thanks to the help of ancestry.com, we have even found out just in May this year that my great grandfather was a medic from Paris and had met my great grandmother, an Irish nurse who had resided in New York.

“We still havent found out who my actual grandfather is but only time will tell and I won't give up.”

With all this in mind over the past year, Ambrose wanted to represent everything he has learned about his mother in his art.
His exhibition, 'Reborn', represents the darkness and the light of mother and baby homes throughout Ireland.

“'Reborn' is dedicated to my mother, survivors, and anyone affected by the inhumane atrocities that happened in these 'safe houses' that were masked within the facade of Christ and the Church,” said Ambroise.

“I hope that people can take something from this exhibition and help me try to shine a light on this subject, no matter how small.

“There are many proposals for public inquests All over the country North and South. It's just a matter of time before this injustice to human life is dealt with as humanely as possible.”

The Exhibition will be officially opened this evening (Wednesday) at 7.30pm by An Cathaoirleach Martin Mulleady in Longford Library.

There will then be a reading of short pieces written by writers across the country and based on the theme of Mother and Baby Homes.

More information on Ambroise can be found on his Facebook page.

Our extensive coverage of Cruthú Arts Festival. Keep a close eye on this link for regular updates.