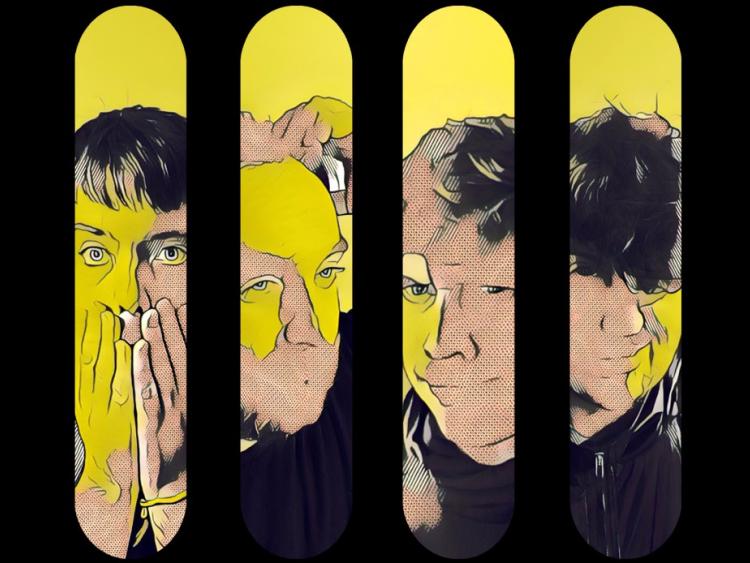 White Chalk will perform in the Backstage Theatre this Saturday, July 22

Thanks to technology, it's an exciting time for music according to Longford native and a quarter of the popular band White Chalk, Kevin Farrell.

The four-piece band is currently whittling down their repertoire of over 200 songs to just 12 for their set list in the Backstage Theatre this Saturday (July 22).

“Over the past two years we took the time to write the music that we believed we had the potential to write,” Kevin told the Longford Leader last week.

“Our style has definately changed. It's sometimes hard to realise that when you are actually writing the songs, but close family and friends tell us that it is more 'dancey'.

“I believe our style has changed as the writing process has changed. We used to sit in our bedrooms or fields or forests with an acoustic guitar and write but now we write and produce the songs on recording programmes.

“This has opened us up to a whole new sonic world which we love experimenting in.”

And, he added, this day and age is an exciting time for music, with tools and programmes that were completely unobtainable before.

“I see this first hand as a music teacher,” said Kevin.

“I had the pleasure of teaching some incredibly talented young men in St Mel's this year.

“Something I wanted to do was show them how to record themselves at a fairly high audio quality, while keeping it cheap, easy and losing that 'I can't do this' attitude.

“The talent in Longford is really amazing and there are some great people around, selflessly giving oppertunities to the youth.”

And speaking of opportunities, White Chalk has had plenty of their own over the years, creating a number one EP on iTunes, appearing on TV, and playing big shows.

“We were invited to support Rea Garvey in Germany, Austria and Switzerland. This was a bigger tour than we could have imagined as we were performing to crowds up to 14,000 each night,” said Kevin.

“We were overwhelmed by the reaction of people there and loved every moment. We also toured with Kodaline and James Bay in Ireland and the UK. Playing so many of our favourite Irish festivals was also very fun.”

The band, made up of Kevin on guitar, vocals and synths, and Mullingar natives Conor Quinn (vocals and keys) Liam O'Reilly (bass) and Brian Masterson (drums), have been writing and recording music from the very start.

White Chalk sold out the last time they came to Longford, so be sure to get your tickets now.

For more information on the band, or to listen to some of their music to date, visit their Facebook page @WhiteChalkBand.

White Chalk will perform at the Backstage Theatre on Saturday, July 22. The show begins at 8.30pm with support from Fallen Lights.