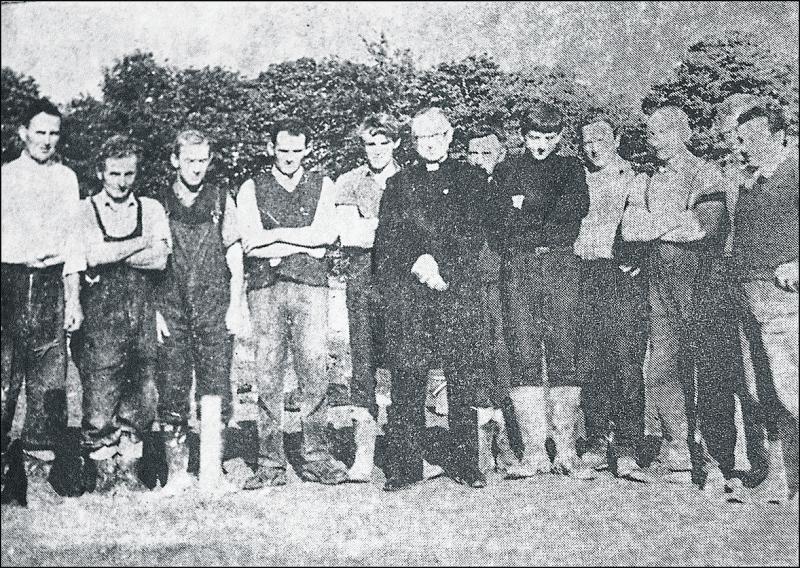 The workmen who were involved in the excavations at Back of the Hill in 1967 during the visit of Rev Dr C Daly DD, Bishop of Ardagh. From left to right: Tom Keenan, John M. Keegan (landowner in 1967),

A tea time talk, including a lecture by archaeologist Adel Coleman on ‘The Excavations at the Back of the Hill’, takes place this Saturday, March 11 at 5pm in Ardagh Heritage and Creativity Centre.

All are welcome to view the new additions to the exhibition on the dig at The Back of the Hill and Breany and additional information on the St Mel's Cathedral excavation.

The King at the Back of the Hill

Everybody knew there was a King at the Back of the Hill. He wasn't spoken of or discussed in great detail but everybody knew. When Liam De Paor, a famous archaeologist and historian of the 1960s, came to Ardagh to excavate the site at The Back of the Hill the locals were not surprised when what appeared to be the skeleton of a man of noble birth was found.

It is not proven that this skeleton is a king or had any significant role but the stories still remain and whether he is or he isn't he is celebrated as such.

The 1967 dig itself was of huge importance to the area and of historical significance to the country. Many locals assisted in the excavation and articles were written for local, national and international publications.

However the findings, including the skeleton and a brooch among other items, remained in storage and the results were not written up until Adel Coleman, archaeologist with UCC undertook this work in preparation for her Masters Degree. Finally, thanks to her generosity and that of Longford Heritage Officer, Máiréad Ní Chonghaile and Archivist, Martin Morris, her findings have been added to the exhibition in Ardagh Heritage and Creativity Centre.

Who is The King at the Back of the Hill?

Ardagh was of significant importance since ancient times, well before the written word and the Christian establishments created their history. It was a location for many an important person and it is mentioned many times in The Annals of Ireland.

Ancient texts mention a King Maine of South Teabtha residing in Ardagh. King Maine was brother of King Caibre of North Teabtha and King Laoghaire who allowed St. Patrick through Meath to spread his faith. These men were sons of Niall of the Nine Hostages.

Locally, it is widely accepted that the body found was that of King Maine. This is not proven but there is a body, there was a King Maine and the location of the dig is locally known as “King Man's Fort” or “The Fort of Maine”.

In the ancient writings it states that Maine welcomed St Patrick and it was he who gave permission for Patrick to establish a monastery and leave his nephew Mel as bishop in Ardagh. Caibre, much like Laoghaire, was not as welcoming but unlike Laoghaire he did not allow Patrick in his area and rather turned his back on him and continued worshipping the Sun God. Caibre's sons were more politically aware and accepted Patrick's teachings but it is said Caibre kept his back to Patrick at every meeting.

Just up the road from Ardagh Heritage and Creativity Centre on the right hand side, towards Edgeworthstown, there is a stone with an imprint on it that is called The Kneeling Stone of St Patrick.

Perhaps this is where the saint knelt before our local King to ask permission to spread his word? Patrick is said to have stayed a while in Ardagh as the guest of King Maine and there is a story where he foresees that Maine's concubine is pregnant with Caibre's son's child.