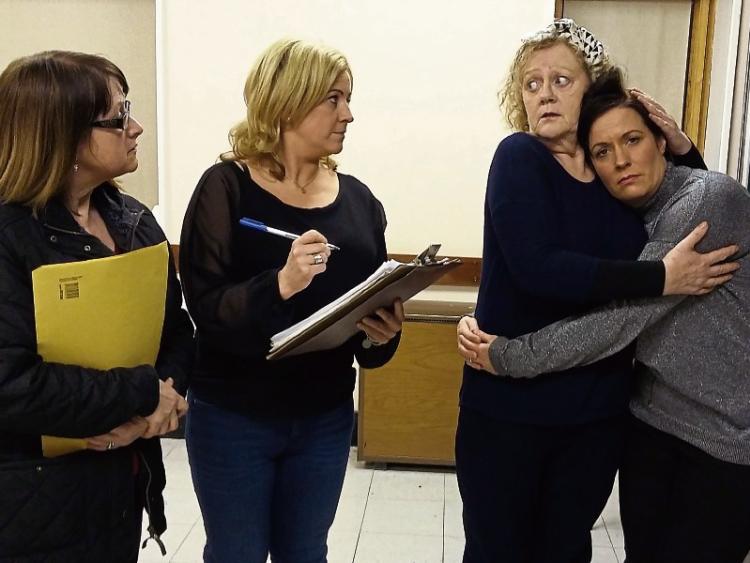 If the rehearsals are anything to go by, then Backstage Theatre Group's 2017 Spring production will be a huge hit with Longford audiences.

Over the past number of years, Backstage Theatre Group have moved outside their comfort zone, producing some excellent moments of theatre, particularly with their production of 'Blithe Spirit'.

“We had a production team in last week where we were running act one for the first time,” Ollie recalled. “They just loved it, and I've never seen a crew so taken by a play.

“They just loved it and they're so looking forward to getting involved.”

An autobiographical play, 'Same Old Moon' features scenes in the life of Brenda Barnes (played by Christine O'Brien), where we see snippets of her life from age nine right up to her forties.

Christine will be joined on stage by Phil Cox, who plays the role of Brenda's charming but destructive father Desmond.

Bridie, Brenda's mother, a nice, sincere woman who can also be quite hurtful towards her daughter, will be played by Eileen Murphy, who will also appear as Granny Cleary.

Brenda's bitter aunt Peace will be played by Maureen Dunne, who also performs a role as a bureaucrat in London.

Declan Neville will perform the parts of Mooney, a character in a Dublin pub; Michael, an inquisitive postman in Galway; Enrico Caruso and London landlord Mr Mullen.

Niamh Quinn Hanley, meanwhile will switch between brazen Galway girl Bella; Di, an English girl who befriends Brenda; and a nurse in London.

Mother Superior at a Convent in Galway; a colourful and vulgar cafe proprietor in Galway and a second bureaucrat in London will all be portrayed by Liz Leavy, while Davy Flaherty takes turns in the roles of a priest; Brenda's cousin Kevin; cockney boy Trevor; Brenda's husband Mark and a bartender.

“We have an extraordinary, experienced cast and crew,” Ollie continued. “They're going to deliver a great show. But how we present the production will be as big a challenge.”

This is largely due to the fact that the play is set in a variety of locations - Dublin, Galway and London - with little time in between scenes to change sets and costumes. But Backstage Theatre Group never were ones to shy away from a challenge.

“The changes in age will be done by the skill of the actor and subtle costume changes,” Ollie revealed. “There's no time to do a complete costume change

“The main challenge is to keep the audience engaged. The scene changes have to be swift and interesting.”

With less than a month to go until the curtain rises on the latest production, Ollie gave audiences a little insight into what they can expect from the group's first production of the year.

“They can expect an absolutely brilliant laugh and they can also expect a human story to unfold in front of them.”