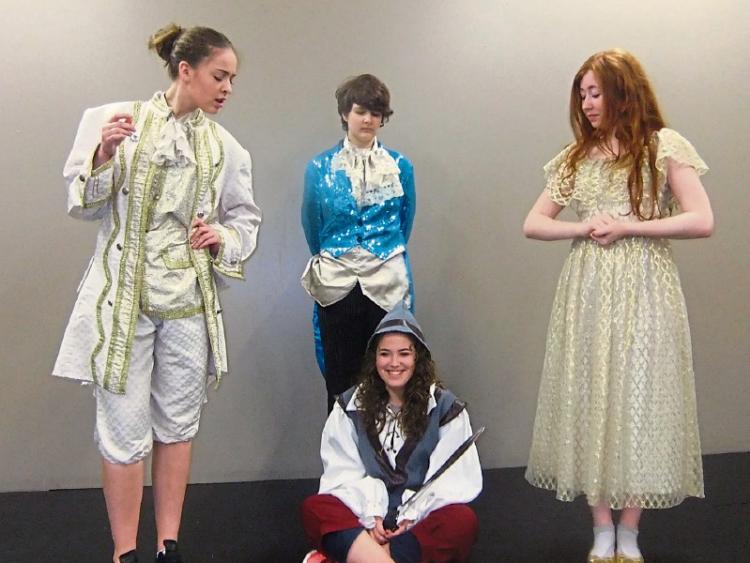 There was great enthusiasm and excitement in St Michael’s BNS last Thursday as Backstage Youth Theatre’s ‘Prince Handsome’ rehearsals continued at speed ahead of their six-show run this month.

Written by Brendan Williams, ‘Prince Handsome’ sees the title character try to marry the rich Princess Mia in order to save his father’s failing kingdom. There are however, many obstacles that stand in the way, not least the evil Vill.I.An, who also wants to marry the princess.

Talking about her role in the show, Christine Gaynor, who plays Decoroso - co-narrator, alongside Antonia - said; “I’m the narrator but more than that, I ask questions on behalf of the audience and I say what the audience is thinking”.

Her first time to tread the boards, Christine is enjoying rehearsals and is looking forward to bringing the show to the stage.

Meanwhile Ciara Farrell, another newcomer to BYT, will perform her first lead role in a Panto as Princess Mia, the object of Prince Handsome’s affections.

“She loves to have fun,” Ciara said of her character. “She’s a bit mischievous and she’s not really your everyday sort of princess.”

“Her father has arranged that she’s going to marry Prince Handsome but she plays a trick on him.”

Panto Director and BYT Chairperson Paul Higgins then explained that despite the usual Christmas holiday lull, great progress is being made on the show.

“We did a lot of work earlier on, so at this stage we’re just fine-tuning and working on the ensemble pieces. We’re also working on pieces of set and finalising costumes.

“We’ve done the make-up workshops and we have a couple of past members that have come back to help.”

In regards to the 26-strong cast, Paul added; “The cast is so different every year. We have new people in there, and we’re sort of getting to know them.

“It’s a great atmosphere, it’s great fun and there’s no hassle, which is what it’s all about, really.”

Tickets are selling fast to this year’s Panto - the seventh to be presented by BYT. Early booking is advised to avoid disappointment.

Tickets cost just €12/€8, with a special family of four ticket on sale for €35, and can be purchased from Farrell Coy in Longford town; from the Backstage Theatre Box Office on 043 33 47888, or online at www.backstage.ie.