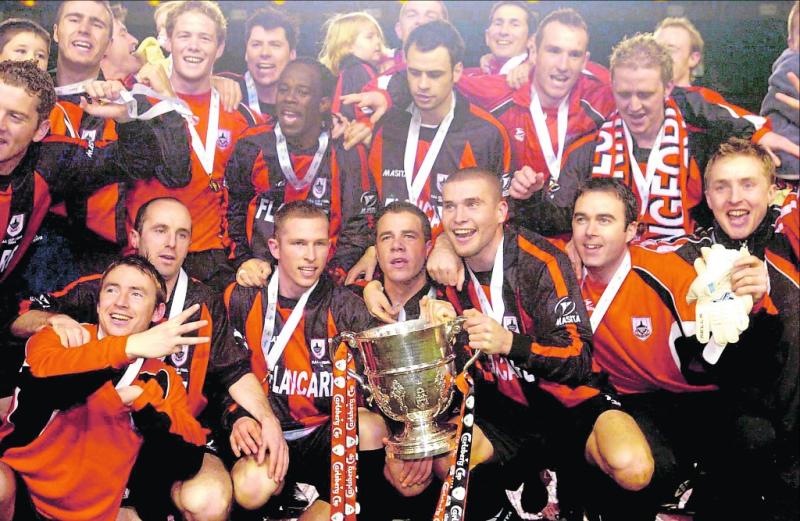 Ballinalee boy Sean Prunty celebrates with other members of the triumphant Longford Town squad after the FAI Cup was won for the second year in succession at Lansdowne Road back in October 2004.

In a sensational finish to the FAI Cup Final, never-say-die Longford Town won the coveted title for the second year in succession thanks to dramatic late goals from Alan Kirby and Paul Keegan in the space of two glorious minutes at Lansdowne Road.

When Willie Bruton fired Waterford United in front with 62 minutes gone on the clock, the reigning champions were reeling on the ropes but the ‘blues’ failed to deliver the knock-out blow when they wasted a great chance of putting the issue beyond all doubt just four minutes later.

The always dangerous Bruton was in the clear but he chipped the ball over the bar with only opposing keeper Stephen O’Brien to beat in what was a very lucky escape for Longford.

But the Town bravehearts, spurred on by their 6,000 supporters, never gave up the fight in the face of adversity and were eventually rewarded for their perseverance in the 86th minute when Alan Kirby blasted a piledriver into the back of the net for the equaliser.

A replay looked a certainty at this late stage but stunned Waterford were almost on the verge of collapse and less than two minutes later a costly mistake by defender David Breen - under pressure from Eric Lavine - gave Paul Keegan a gift which he gratefully accepted.