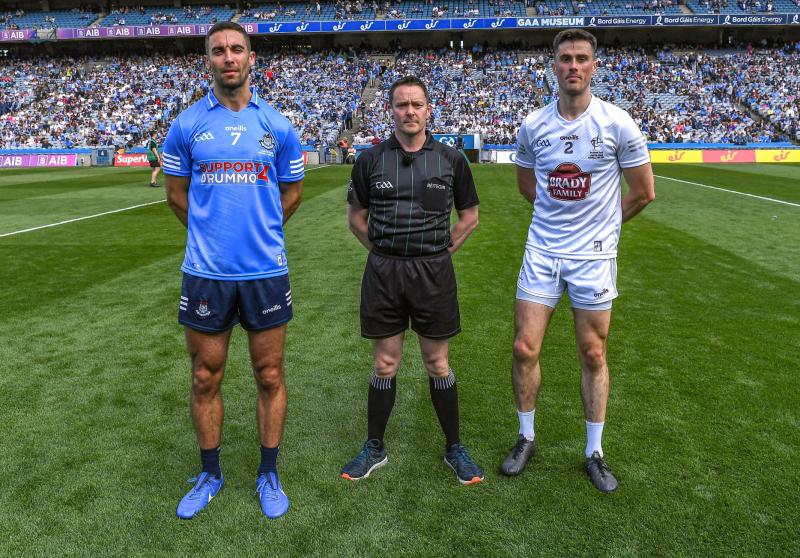 Roscommon referee Paddy Neilan with team captains James McCarthy of Dublin and Mick O'Grady of Kildare before the Leinster Final at Croke Park on May 28. Picture: Piaras Ó Mídheach /Sportsfile

There will be great local interest in the All-Ireland senior football championship semi-final on Sunday next in Croke Park at 3.30pm.

This game has been hyped up by all journalists and commentators and described as the game of the year. To have a local interest in a game of this stature is wonderful.

Without doubt the main man on the day will be the referee and that is where our interest lies in the fact that St Faithleach's clubman Paddy Neilan has been given the task of ensuring that the game is carried out to rule.

Paddy has been refereeing a good number of years consistently to a very high standard and it is no surprise that he has been handed this potentially game of the year.

Paddy is son of Bernie and the late Paddy Neilan, Lough Ree Park. Apart from our team preference we will be cheering on Paddy first and foremost. We wish you the very best of luck Paddy.

That may not be the only connection to this game. Eoghan O’Donnell, captain of the Dublin hurlers recently switched his allegiance from the hurlers to the footballers.

Eoghan, a star player of Whitehall Colmcille GAA club is son of Micheál O’Donnell and Mary Kinsella. Micheál born and bred in Curraghroe has many family members still in Curraghroe Sean, Gerry and Nuala Gunn while other brother Harry resides in Barna, Co Galway.

We wish Eoghan and his teammates the very best of luck.