Depleted Ireland held to scoreless draw at home by Wales 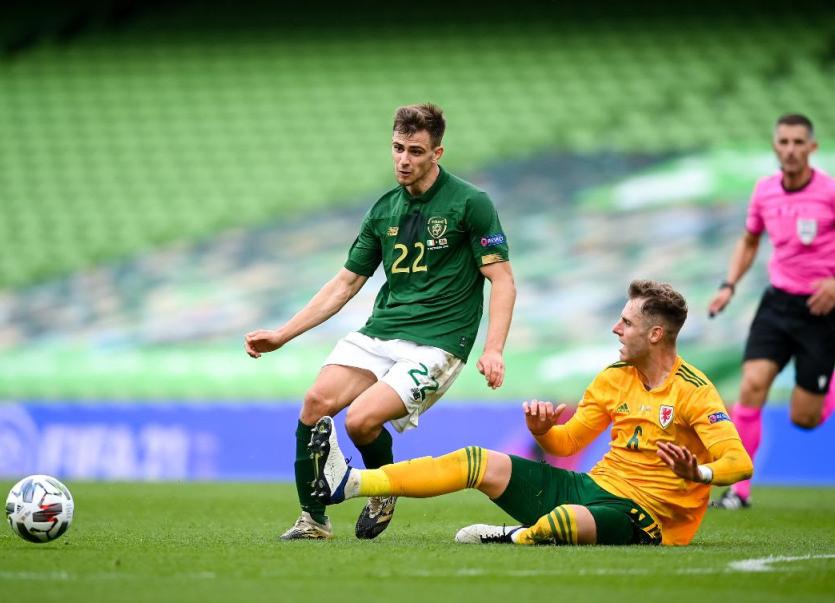 A heavily-depleted Ireland were unfortunate not to seal their first UEFA Nations League victory in the 0-0 draw against Wales.

Ireland created many of the better opportunities in the contest but failed to find the net at the Aviva Stadium as James McClean saw red late on.

Stephen Kenny was forced into a number of changes ahead of the match with five players ruled out due to a COVID-19 case and injuries to David McGoldrick and James McCarthy.

Jayson Molumby came into the side for his second appearance for the senior side as Shane Long started up front and James McClean also started, his 75th cap for his country. Robbie Brady also reached a milestone today with his 50th cap for Ireland as the home side were dealt another blow midway through the first-half.

Centre-back Kevin Long suffered a gash to his eye after a clash with Kieffer Moore which saw Cyrus Christie come on and Matt Doherty move to centre-back in the 25th minute.

There were few chances in the first-half as Brady flashed a shot wide of the target from the edge of the area and Christie curled his left-footed effort over in the final action of the first 45 minutes.

The contest improved after the break and Ireland will be frustrated by their inability to make the most of their chances. The chance of the match came when Enda Stevens picked out Long in acres of space but his header went over the bar in the 55th minute.

Substitute Daryl Horgan could have won the match for Ireland with 10 minutes remaining as McClean's cross found the Wycombe Wanderers man at the back-post. His header was well blocked and Horgan failed to keep the follow-up down and on target.

McClean saw red with six minutes remaining and the game ended goalless with further call-ups necessary ahead of the trip to Finland for the UEFA Nations League match on Wednesday.

"It's been tough on the players over the past few days. We got back at 6am after the 120 minutes against Slovakia and then losing five players on the day of the game, it wasn't easy," said Ireland boss Stephen Kenny.

"The team changes were a lot for the players to take in at late notice so they showed what they're made of and their character by going out, and putting a good performance against Wales. Huge credit to the players for the way they responded."