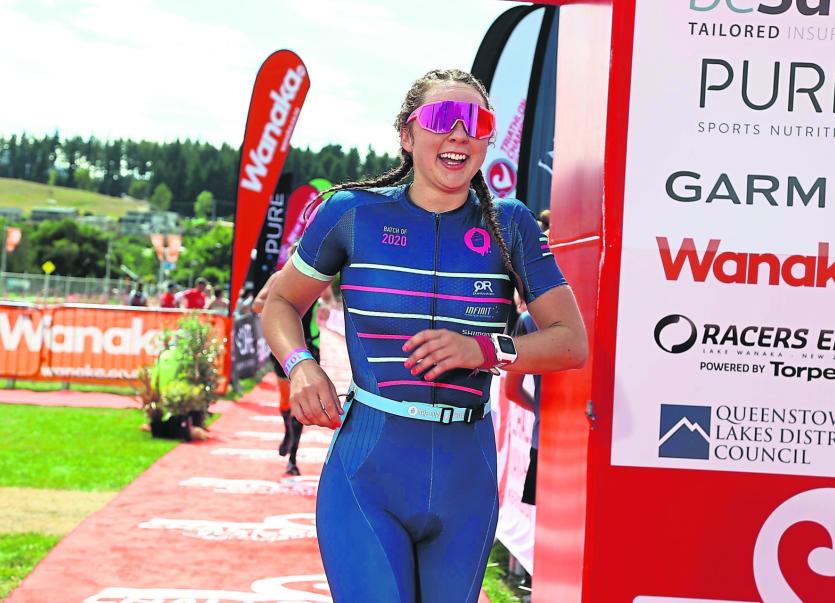 The late British prime minister Margaret Thatcher was famously described as the ‘Iron Lady’ and it is a title one could also attribute to Abbeylara lady, Fiona Gallagher, whose steely determination and resilience saw her recently crowned as the Asia Pacific female AquaBike amateur champion.

In the same event, last year in New Zealand, Fiona was involved in a serious crash on her bike and sustained a number of broken bones.

So her triumph on February 15, in the Challenge Wanaka, as she says herself ‘was a bit of a redemption day’.

“I was going in, hoping to do well and obviously I had a lot of little goals I wanted to achieve. Crossing the line was very emotional, but I had tears for all the right reasons this year,” an elated Fiona explained.

The Challenge Wanaka doubles up as the Asia Pacific Championships and Fiona competed in the AquaBike, a 3km lake swim and 120km bike trek around Wanaka. There were over 500 athletes competing and Fiona won her age group (25-29) and the overall female amateur competition. The next girl was 15 minutes behind her. She finished 8th overall between men and women.

She now has the opportunity to represent New Zealand at the world ITU Aquabike Championships in the Netherlands in September.

“I'm super excited about it. It never feels real when I say it! I think every athlete competing in any sport dreams of getting to a world championship event to race the best of the best. One of my good friends and training partners, Adam Wilson, won the overall male competition, so we both get to go over and race.”

Fiona attended Aughnagarron NS and Cnoc Mhuire, Granard before she went on to study law and Irish at Maynooth University. She always possessed a passion for sports.

“I swam with Longford swimming club for a few years, played football with Mullinalaghta ladies and had the chance to represent my county with it. I've played basketball with Streete Warriors. Sport has always just been second nature and I was happy to be involved in everything. I was also extremely lucky that my parents (Martin and Mary, RIP, who passed away suddenly in 2011) were also involved in a lot and they supported any sport my older brother (Shane) and I wanted to get stuck into.”

Fiona is in New Zealand for just over two years and she is based in the South Island and is employed with Mactodd Lawyers in Queenstown. “I moved to New Zealand as a bit of a new adventure. I'd heard only great things about it and it's people, so I thought why not. I guess I didn't expect to be here as long as I am, but I really love it and have a good life. I obviously get homesick from time to time, but technology has made it very easy to stay in touch.”

Fiona says she ‘got into triathlons by chance’ and she trains 16 to 20 hours a week.

“I joined the swimming club when I moved to Queenstown and was encouraged to get a bike and tag along to a few training sessions.

“I guess having an endurance base from swimming. Cycling and running came pretty naturally to me and I loved it. I'm again just very lucky here, I've made great friends through triathlon, who happen to be incredible athletes. So even though most training sessions are filled with hard work, it's still just hanging out with your friends at the end of the day.”
Fiona has been on the podium in every race she has finished and after her crash last year, she revealed that there was a lot of nerves, tinged equally with excitement, going into the 2020 season.

“Last year was my first season and I only managed to take part in three events. After two podium finishes, I crashed on my bike in the 3rd and broke a few bones.

“So after surgery and a few months recovery, I just decided to see where this season would take me.

“I've done four events so far, with three 2nd place finishes and then 1st in my most recent. I've got another two races to go.”
Fiona says triathlon is an expensive sport, so she has to plan her season wisely.

“I really love it though, so it's never a sacrifice.”

Ahead of the World ITU Aquabike Championships on September 12, Fiona is in the process of putting feelers out for sponsorship and if anyone is in a position to lend support she can be contacted at fionagallagher93@gmail.com

Some of the top amateur triathletes in the world will be in the Netherlands and she is really excited about the prospect of pitting herself against the best.

Best of luck to her.