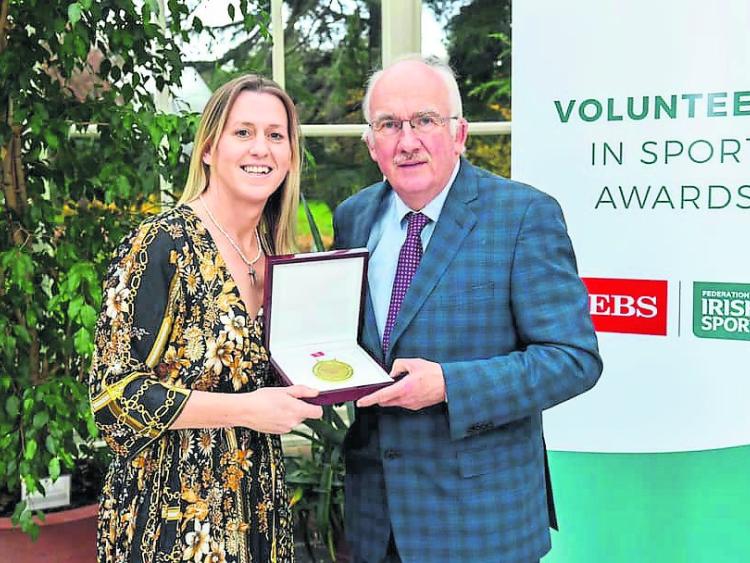 One of the busiest sports coaches in Ballyleague and Lanesboro has been honoured at a national award ceremony.

Eamonn Bolger was nominated for the Federation of Irish Sport - EBS Volunteers award by his colleagues in Ballyboro Football Club for his outstanding commitment and never-ending dedication to coaching young boys and girls in the area of soccer after a lifetime of similar contributions to gaelic games, community games and rugby.

Eamonn was presented with his award and a cheque of €250 euro for his club by Minister of State Brendan Griffin in Farmleigh House.

Arriving home from the awards, Eamonn was greeted by parents and members of Ballyboro FC at the club's new 3G pitch in Lanesboro Community College.

Eamonn was honoured by the judges for helping to steer so many young sports stars to success over the last 30 years.

His volunteering began in 1976 when he was asked by school principal, the late Phelim Henry Snr, to coach the local Community Games soccer team in Clontuskert where he lived.

Eamonn started coaching St Faithleachs GAA teams in 1979 and won numerous county titles at all under age levels. He acted as secretary, treasurer, and PRO for both St Faithleach's minor and senior clubs and acted as PRO for the Roscommon Minor Board. He was Manager of the Roscommon county under 16 and county minor teams, winning Fr Manning Cup in 1993.

In recent years it has been his commitment to Ballyboro FC that has given Eamonn most pleasure.
He became actively involved with Ballyboro FC coaching under 11, under 12, and under 13 teams and guiding the club and some of its players to inter county and national grade events. He also played a key strategic role in the committee that planned the development of the club's fantastic new 3G pitch at Lanesboro CC.

Ballyboro FC Chairman John Tynan paid tribute to Eamonn, "Nobody has put the effort into our club like Eamonn. His energy is boundless and our local community and our club would be lost without him.”