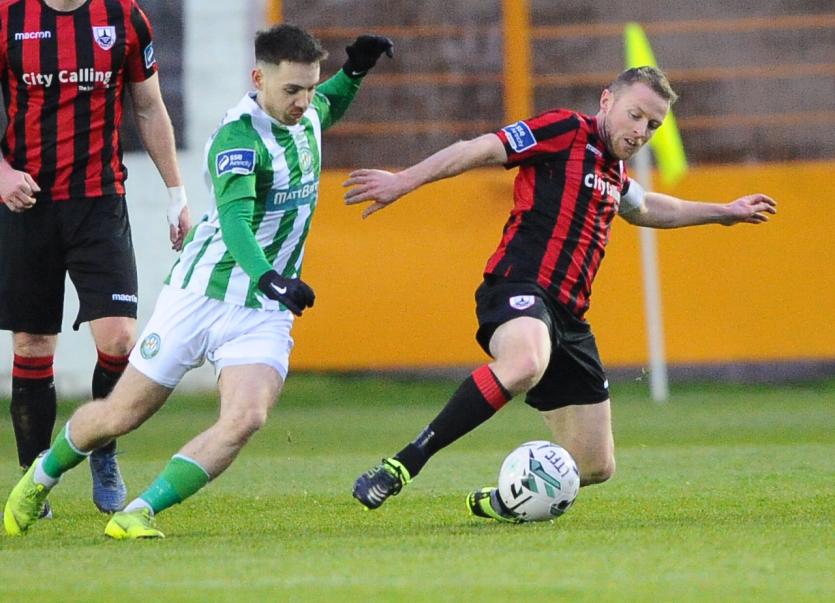 First half goals from Mick McDonnell and Peter Hopkins helped Longford Town record their fifth league win of the season and in doing so maintain their unbeaten start (after seven games) with a thoroughly deserved win over a somewhat poor Bray Wanderers side at City Calling Stadium this evening.

The visitors offered nothing throughout with Longford Town keeper Lee Steacy not having to make any save of note. Such was Town’s dominance in this game they could afford to take it easy in the second half but were still able to control the game with some good passing and passages of play.

Town were completely dominant in the first half. They created their first chance in the sixth minute when a corner from Dean Zambra was headed out for a corner by defender Hugh Douglas.

Two minutes later Town broke the deadlock when Mick McDonnell’s downward header from an Anto Breslin’s corner found the back of the net. It was all Town and their delivery from corners was excellent but they couldn’t create anything to test Gabriel Sava.

Adam Evans brought a good save out of Sava in the 29th minute. Minutes later Evans played a neat ball through to Sam Verdon but he took too much out of the ball with his first touch.

Town’s pressure paid off in the 34th minute when they doubled their advantage; Aodh Dervin with a perfectly weighted pass to Peter Hopkins who showed great composure to sidestep Sava and shot home.

Bray’s first chance on goal came in the 43rd minute when Kilian Cantwell’s shot just went wide. The Wicklow club offered very little in the second half and Town were happy just to sit back on their lead.

The first effort on goal in the second half came in the 78th minute when Sean Brennan played the ball to Sam Verdon but Sava got down to save his shot. Two minutes later Verdon had a chance again but curled his effort wide of the far post.

The visitors tried to muster up chances at the end but created nothing to trouble Lee Steacy who enjoyed his fifth clean sheet of the league season.