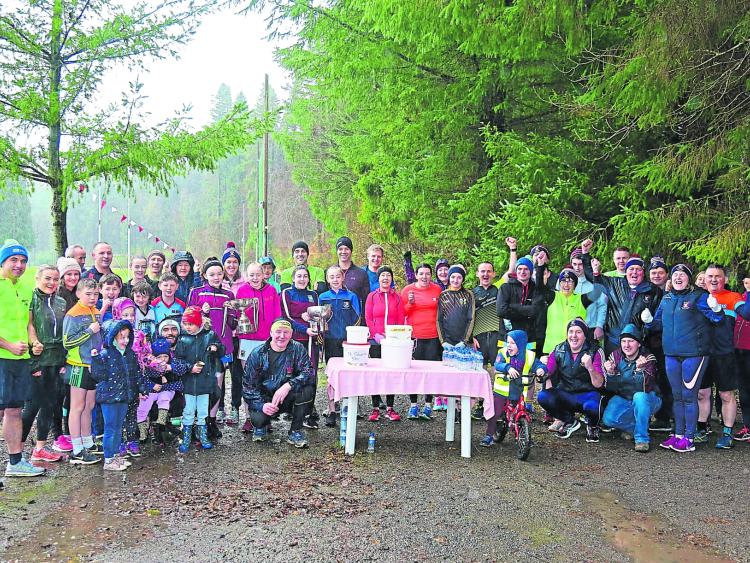 Participants in the 5k fun run/walk at Derrycasson Wood on Sunday last pictured with the Connolly Cup and Skelly Cup (league) won by Mullinalaghta.

As St Columba’s Mullinalaghta get set to head into a very historic Leinster Club Senior Football Final this Sunday, the people of the tiny half parish along the north Longford border with Cavan can finally dare to dream.

It has been years in the making, but that doesn’t matter because what’s happening right now in Mullinalaghta is quite simply “a dream come true”.

ALSO READ: WATCH | Mullinalaghta are going to give it their best shot against Kilmacud Crokes in AIB Leinster Club SFC Final

“We never dreamt that this could happen,” an absolutely delighted Club PRO, Thomas McNerney told the Leader this week.

Thomas played football for the side from 1981 and is a member of the committee ever since.
He says the local football club is at the very heart of the community in Mullinalaghta.

Meanwhile, when Mullinalaghta St Columba’s won the first of the three-in-a-row senior championships in 2016 it was 66 years since the club last clinched the county title. Pride of place reached fever pitch.

“It's been a rollercoaster since then to be honest with you and the whole community is behind us,” continued Thomas, before pointing out that the neighbouring parishes and counties have also rowed in behind the north Longford side.

“There are flags everywhere; the lady at the end of my lane had to get a new hat and I know for certain that there are a lot of supporters looking down from above with a smile on their faces at the moment.”

There could not be a successful football team without the support and encouragement of a mother and Marie Matthews, mother of JJ and Jayson is very aware of that.

She says too though, that her sons loved playing football and it very quickly became a big part of the Matthews’ family life.

Marie herself is deeply involved with the Club and has been one of the key women in the ladies setup as well.

“As a family we thought it very important that all the kids were involved in sport,” she told the Leader.

“We are a very sports oriented house anyway; it’s very important to be involved in something whether it be sport, music or dancing.”

The local woman says that from a very young age her boys were involved in sport and the football, in particular, has played a key role in their development.

Marie places great emphasis on the underage team structure with Northern Gaels comprising Abbeylara and Mullinalaghta which JJ and Jayson have come through.

“Northern Gaels has played a huge role with the team that is going out to play in the Leinster Club Final on Sunday and all the lads will admit that,” she smiles while alluding to the fact that “the numbers are very tight” in Mullinalaghta.

“The lads on the team have all played at the highest level possible down through the years, starting with the U-14 Feile and winning with the Cnoc Mhuire Granard school at All-Ireland level.

“All of this is now standing the Mullinalaghta lads in very good stead; it all comes down to their grassroots and their training.”

Marie says it was easy to keep her sons involved in the football.

“The interest was there; they just loved the football and they never saw it as a chore, it was their life and they enjoyed it.”

And, as the old adage goes, the apple doesn’t fall far from the tree and Jayson’s grandfather Jim Matthews was also a key player on the Mullinalaghta team that won the Longford Senior Championship back in 1950.

“He would be very, very proud of what is happening now,” smiles Marie recalling some wonderful memories to the fore.

Meanwhile, a small club would not be able to keep going without the volunteer element and there are many women in Mullinalaghta who keep the show on the road when it comes to providing the refreshments and encouragement to the team and their supporters.

On Sunday last she was making the tea at the clubhouse for all those who participated in the fun run/walk to raise funds for the club.

“It’s brilliant what’s happening and the excitement is not just within the parish; even at work I have people coming up to me every day saying great things about Mullinalaghta and the team,” she smiles, before pointing out that social media is also buzzing with messages of support and goodwill.

Bernie Rogers, meanwhile, is the mother of Patrick and Gary.

She too is part of the backroom team that’s always there to support and help out in any way she can.

She also paid tribute to Martina Dermody and Brenda Cunningham who are always willing to lend a helping hand!

“This is magical stuff for us really; we dreamed of winning one county title and that was the dream,” she says.

“Then we got the dream when we won the championship in 2016, and since then it’s all bonus territory.

“It’s unbelievable; we have got such enjoyment from the team and from helping out and really the efforts of everyone who does that is very much appreciated.

“We have been doing all this even during the years when we were not winning; there has always been people there giving of their time, bringing supplies to us and never looking for any money - the goodwill has been fantastic. “Win or lose on Sunday, this Mullinalaghta team has done us proud.”

And another great local woman is Margaret Hand and just like the St Columba’s team she can also be described as a Mullinalaghta legend.

She supports and helps out everyone and she has been doing just that with the club for many years now.

“It’s great to see what Mullinalaghta has achieved over the last three years and this will be a golden year if they win the Leinster Final,” she chuckles.

“It would be something unbelievable; we are a small parish that has always been very tight in numbers when it came to the football.

“Everyone is behind this team and we are all very proud of them; I have a grandson, Finlay Clarke (12) and his one ambition now is to play on a team like this.

“He says it is hard to pick one player out of so many good ones, but I think he really admires Paddy Fox.”

It’s also fair to say that it’s the local kids that are most looking forward to Sunday’s game.

It’s not possible to over state their enthusiasm!

Niall Dalton (9) told the Leader that the Mullinalaghta football team was doing very well at the moment and he hoped they would keep it up.

“They are in the Leinster Club Final and that is great,” he said, before pointing out that it was impossible for him to choose a favourite player because they were all so good on the field. Cillian Fagan (8) is going to the match on Sunday. “I will be going to the match; Mullinalaghta will have a go at it and if they don’t win they will still have accomplished something; they have also made history,” he smiles.

“It doesn’t matter if they win or lose but it would be good if they won.

“They have been great so far, they met tough teams; all the players are good - I like Rian Brady, Aidan McElligott, Jayson Matthews and Francis Mulligan.”

His brother Fiachrach (6) is very proud of how far his local team have come.

“They are the first Longford team to come this far,” he added.

“I feel very proud of them.

“I play football and I would like to play in a Leinster Club Final for Mullinalaghta some day. “I went to a good lot of the games and I love watching Mullinalaghta playing.”

“I think they have a great football team and loads of good players,” he told the Leader.

“They have showed that by getting to the Leinster Club Final and they are well fit to win it.

“The players are all fit to defend, score and catch high balls and all of this will be crucial on Sunday.

“Goals can win a match so the keeper will need to be on top form to save them.

It’s so nice to watch then playing.”

It would be impossible to talk about Mullinalaghta football and not include Bernie McElligott.
Mother of the five McElligott brothers and married to Dan, Bernie has lived and breathed football for the last 30 years!

She remembers when the seeds for today’s achievements were sown and how Mullinalaghta football started for the McElligotts when the family moved back to the area in 1989.

In 1990 Dan and local man John Buckley took over the schoolboys.

“That was where it all started,” Bernie smiles now as she looks back with fondness.

“Back then three or four cars would bring the whole lot of them to training or to a match; there was around 22 or 23 young lads at the time.

“I remember Dermot McCabe and Anthony Murphy were in 6th class and they were the oldest of the bunch at the time.

“You had from that then down to Conor [ McElligott], Kevin Fitzsimons, Shane Mulligan - none of them were playing at the time but they were all part of the squad.

“We would bundle them into cars and away off we all went.”

Then in 1992 the side won the Schoolboys League and the Championship.

The Granard Blitz was introduced then and as Bernie says, “that brought them on another little bit”.

“Then Northern Gaels arrived and shur that was a brilliant structure altogether.”

There is 16 and a half years between the oldest and youngest McElligott brother so this year has proved extra special for the family because it is the first time that all five brothers have played at senior level.

“They were football mad in our house and when the older ones learned to drive it was great because they would bring the younger ones around; before that I was never off the road with the football,” laughs Bernie.

“What’s happening now in Mullinalaghta is unreal, it’s the stuff of dreams.”