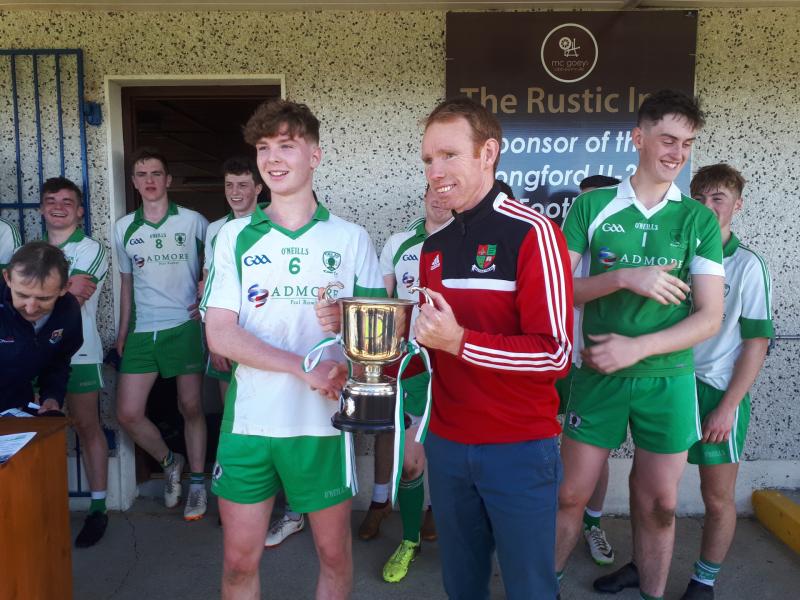 A cohesive second half performance was sufficient to see Emmet Óg Killoe crowned the inaugural Rustic Inn U-20 Football Championship winners as they convincingly overcame Mostrim / Sean Connolly’s by 2-11 to 1-9 in the opening match of the triple bill at Glennon Brothers Pearse Park on Sunday afternoon last.

Killoe captain Niall Farrelly led by example from centre back and there were great scenes of jubilation as he accepted the Kevin Hughes Cup from John Coyle and Co Board Chairperson Eamon Reilly, while the Jimmy Tully Trophy for Player of the Match went to Shane Thompson, who created both Killoe goals, and was involved in most of their positive play.

A Padraic Joyce penatly goal gave Mostrim / Sean Connolly’s an early 1-2 to 0-1 cushion, but Killoe, boosted by a David McCarthy goal, were on level terms by half time, 1-4 apiece.

McCarthy found the net again early in the second half as Killoe surged 2-8 to 1-4 clear by the 40th minute and no matter how hard they tried, Mostrim / Sean Connolly’s were unable to reel in the winners.