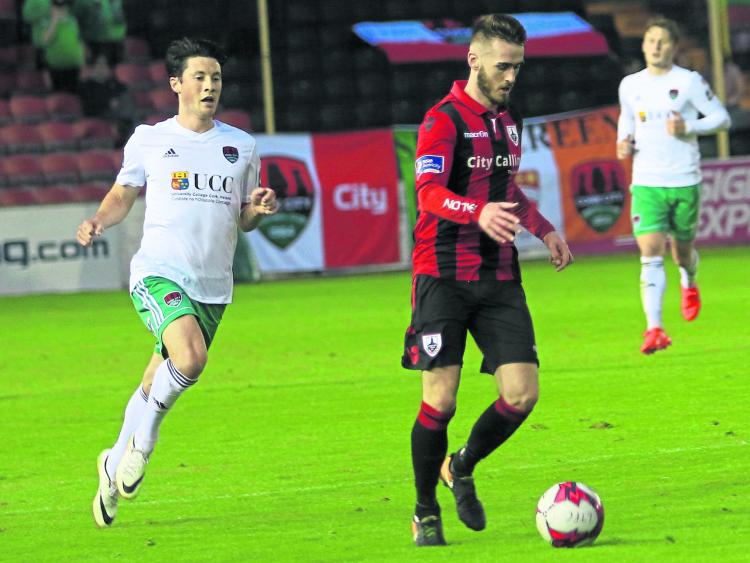 Longford Town FC face one of their biggest games for many seasons this Friday night (kick-off 7.45pm) when they travel to United Park to take on Drogheda with a place in the promotion play-offs at stake.

As it stands at the moment the Town are in fourth place just one point ahead of Drogheda and in the play-off position.

There is no doubt that there is so much riding on this game as both managers try to get the win that would more than likely get his team into the play- offs alongside Shelbourne and Finn Harps.

Drogheda have a rookie manager in Jim Clancy who is a very young man at only 33 but the club chose him to hopefully take the club back up to the premier Division. The very experienced defender played for Shamrock Rovers, Sligo Rovers and Bray.

The Town overtook Drogheda in the First Division table a couple of weeks ago when we beat Cabinteely 4-1 at City Calling Stadium while Drogheda were losing 3-0 to champions elect UCD at United Park.

Not only did Drogheda lose to UCD they also had star midfielder Sean Brennan sent off and he will automatically miss the game against the Town. One of the Brennan brothers from Drogheda he has been their main man in midfield and a more than useful free-kick specialist.

Brennan will be a big loss and they are also missing impressive defender Kevin Farragher who is suspended for the game for his five yellow cards, the same as Town defender Shane Elworthy who will also miss this massive game.

Darren Meenan, who received a red card against Cork City in the FAI Cup on Friday night (which was a very harsh decision by the referee) will also miss the game and the former Dundalk player will undoubtedly be a huge loss for the club in this very important fixture.

Elsewhere UCD are at home to second in the table Finn Harps and with a five point advantage the College team only need a point to guarantee a move back to the Premier Division.

UCD caused a major upset in the Cup quarter-finals last weekend when they beat last season's promoted side Waterford United who are currently fourth in the Premier Division. Shelbourne, who sit in third place, take on Cabinteely who are at home and knowing Pat Devlin he will be looking to get a couple of good results before the end of the season.

Last weekend the Town played Cork City at City Calling Stadium in the quarter-final of the Irish Daily Mail Cup and suffered a heavy defeat against last season's double winners.

The Town went into the game minus the services of the suspended Daniel O'Reilly along with the injured players Jamie Hollywood, Sam Verdon and Dean Byrne, all of whom would be in the starting eleven if they were fit.

A lot has been written about the game and the fact that the club were so unlucky to have Darren Meehan sent off in the first half. The tackle on Kieran Sadlier at most warranted a yellow card which the referee was going to give until his assistant who was a long way from the incident demanded a red..

The Town and Drogheda have met twice this season in the league with the Town shading the results with a win and a draw. The first game was played at United Park back in April and on that occasion it was honours even. The Town took the lead with an excellent goal from young striker Dean Byrne who broke the deadlock in the 57th minute and it took a 96th minute goal from defender Ciaran Kelly to get the home side a lucky draw.

The second meeting between the clubs was at City Calling Stadium in mid June and the Town won the game with the only goal of the game coming from Sam Verdon just on the half hour mark.

This was another close game with both defences being on top and one can expect a similar situation on this Friday.

Former Town keeper Paul Skinner will be trying to keep out his former team mates and we all know how good a keeper he can be and no doubt he will be hoping for a clean sheet for his new club.

There is no doubt that Kevin Farragher will be missed out of the defence but Colm Deasy who missed the UCD game will be back in contention for a place in the starting team.

Ciaran Kelly is a very good defender and they also have Jake Hyland and Richie Purdy to compensate for the loss of the suspended Sean Brennan.

After going down to ten men against UCD the Drogheda management replaced their front three Chris Lyons, William Hondermarck and Mark Doyle with Jordan Adeyemo, Gareth McCaffrey and Rob Manley.

There was another former Town player on the bench against UCD, Kealan Dillon, who played here and scored a few very special goals for us.

We all know that this is a make or break game for the Town and we are looking for a big performance from all our players with the support of a big Longford following who are making the trip to Drogheda.