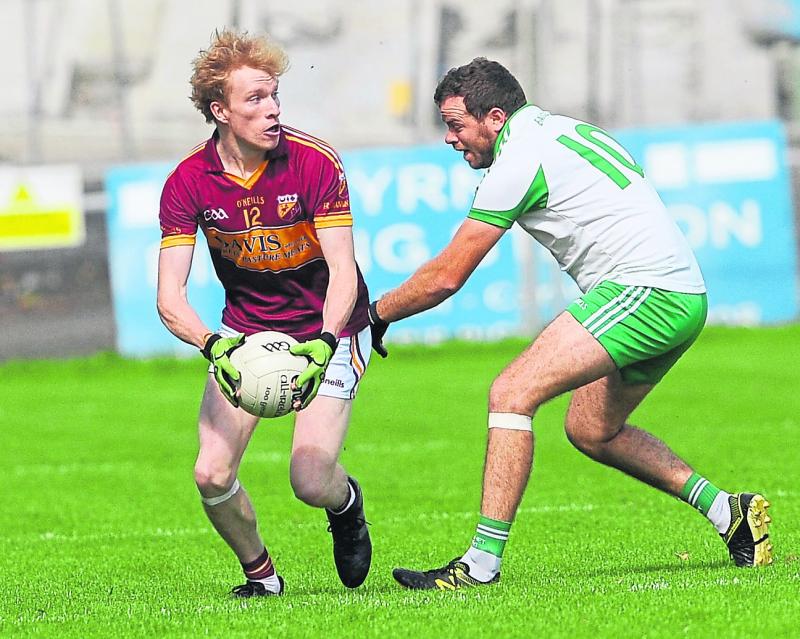 It was all too easy for Killoe as they made it through to the Junior Football Championship Final with ten points to spare over Fr. Manning Gaels at Glennon Brothers Pearse Park on Sunday last.

Two early first half goals, both scored by Shane Thompson, set the Emmet Og second string on their way to an emphatic victory in the semi-final. The Gaels second string struggled to contain Killoe’s pacey forwards while in attack the Drumlish/Ballinamuck side found it hard to get scores as the Killoe defence were resolute.

Emmet Og made an impressive start to the game. Shane Thompson kicked over the opening score with less than 30 seconds gone on the clock. From the kick-out Thompson collected the ball and found the back of the net.

A free from Rory Carthy was the Gaels first point. After seven minutes Killoe got their second goal of the game; Ger Carberry played a good ball into Shane Thompson and he rifled a terrific shot to the net.

Another free, this time from Stephen Donnelly, saw Fr Manning Gaels register their second point but that was to be their last score of the first half as the Killoe defence stood firm with Tommy Reilly in fantastic form.

Three points from David McCarthy (one free) extended Killoe’s lead to eight points in the 17th minute. Eugene Clarke followed up with a point before Shane Thompson put 10 points between the sides with a fine score in the 28th minute.

In the first minute of stoppage time Tommy Reilly started a move which ended with David McCarthy hitting his shot against the butt of the post.

The Gaels had a goal chance two minutes into the second half but Gary Connell done well to block Stephen Donnelly’s shot. Down the other end Ger Carberry set up McCarthy but his effort was saved.
Philip Kiernan and McCarthy (free) added further points to the Killoe tally to extend the lead to 12 by the 39th minute.

After going 31 minutes without a score Fr Manning Gaels got their third point in the 44th minute when substitute Michael Mulleady kicked over a fine effort. Minutes later Stephen Donnelly was on target again from a free.

In the 51st minute the butt of the post denied David McCarthy again and then one minute later after receiving the ball from Carberry, Conor Gilna’s shot came off the crossbar and the Gaels were able to clear the danger.

In stoppage time substitute Darren Kelly kicked over another point for Killoe to leave 10 between the sides at the end and a place in another county final.