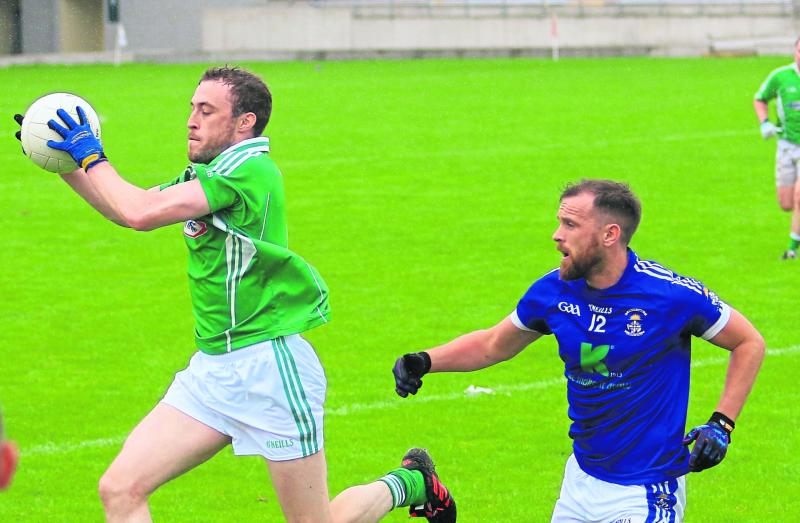 Clonguish booked their place in the Junior Football Championship title decider when they beat Legan Sarsfields by the narrow margin of just a single point in a tight contest at Glennon Brothers Pearse Park on Sunday last.

The turning point of the semi-final clash came in the 46th minute when Clonguish keeper James Tormey pulled off a terrific save to deny Steven Doherty a goal for the Sarsfields and there was just a point between the sides at that stage.

Legan had a chance to snatch a draw right at the end but Conor Quaine’s free went high into the air and bounced wide.

Early frees were traded between Clonguish’s Ian Reilly and Legan’s Ollie Hogan before Clonguish took control and built up a three point lead.

Brian Sweeney raced through on six minutes to restore their lead before Eibhin Glacken put over a neat effort and then Kevin O’Boyle got his name on the scoresheet.

After going 10 minutes without a score Legan got their second point in the 13th minute when Shane Cox pointed a free after Hogan was fouled. Clonguish restored their three point advantage but then Legan began to dominate.

Ollie Hogan pointed another free and then followed that up with an excellent point from play.

In the 24th minute Legan took the lead for the first time when Shane Cox laid the ball off to Johnny Leonard and he found the back of the net with a superb finish that gave Clonguish keeper James Tormey no chance.

A good Hogan point put three between the sides but Clonguish got back on level terms in the 29th minute when Niall O’Reilly capitalised on a mistake and gained possession before shooting to the net for a crucial goal.

In first half stoppage time Clonguish regained the lead when Colin Clarke fired over a free and thus led by 1-6 to 1-5 at the break.

Two minutes into the second half Legan were level with a neat point from Ollie Hogan but Clonguish replied with two more frees converted by Colin Clarke.

Conor Quaine got a point in the 43rd minute and soon after Clonguish netminder Tormey pulled off a fantastic save to deny Steven Doherty as Legan piled on the pressure to try and get scores. A free from Ollie Hogan in the 49th minute levelled the game for the fourth time.

The woodwork denied Clonguish a second goal in the 50th minute when Liam Sheridan’s effort came off the crossbar but Colin Clarke slotted over the loose ball to edge his side back in front.

Both sides had chances for further scores but squandered them. With the last kick of the game the solely Junior club Legan had the opportunity for the equaliser but Conor Quaine’s free went wide as the Clonguish second string held out for a hard earned victory.