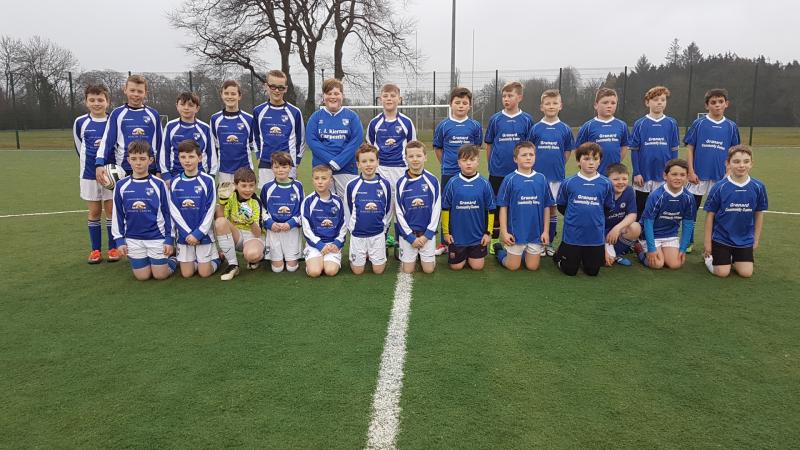 The Clonguish (left) and Granard (right) teams pictured prior to their encounter in The Mall.

A fantastic Clonguish outfit brushed Granard aside in the U-12 Boys Soccer 11-a-side on a damp afternoon in the Mall, Longford.

Venues for the 11 aside football are scarce rainfall leaving water on all pitches and forcing manu cancellations.

It was great to see Granard field a team after a new committee bringing Community Games back to life in the town for 2018.
The match was a lively game with many of the children playing on a full sized pitch for the first time.

Ten minutes into the game and Clonguish were two goals up thanks to centre back Darragh Kelly and Alan Mimnagh.

A brilliant save from Granard’s keeper Daniel Corr prevented James Hagan from finding the net. Granard battled back but Clonguish’s Jamie Dorr completely dominated midfield and he, along with striker Cormac Flynn, got in on the scoring act leaving Clonguish 5 nil to the good at halftime.

Granard never looked despondent and with some encouragement from manager Ger Egan during the break, they re-emerged with a spring in their step.

After a couple of close efforts, Granard’s Ben Blessington scored the first goal of the second half and Granard looked a different team.

Clonguish replied with a goal from substitute Eanna Madden and in the closing minutes Daniel Carey, Adam Santos and Joshua Marsh also found the target.

The rain held off giving the boys a great fun game. Granard will back stronger for next year.