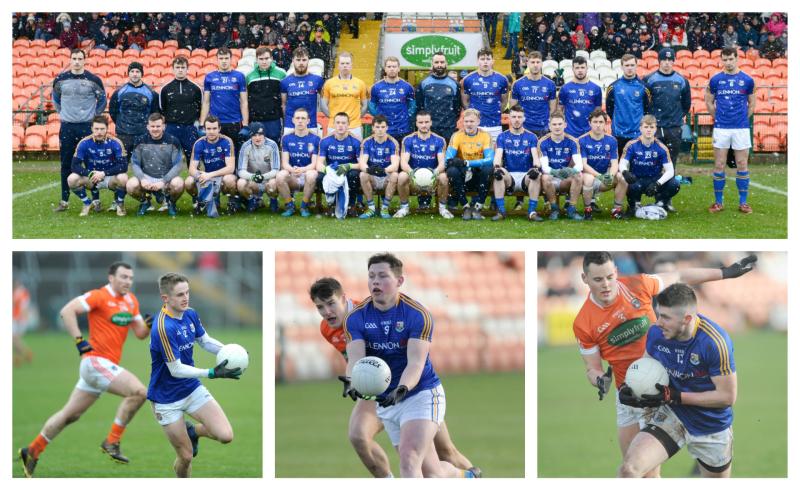 The Longford squad and some action from their Allianz National Football League Division 3 encounter against Armagh in the Athletic Grounds.

Aggrieved Longford folk took to Twitter to express their annoyance over the harsh refereeing calls that they felt cost them victory against Armagh in the top of the table Allianz National Football League Division 3 encounter at the Athletic Grounds.

Read the match report:  Heartbreak and frustration for Longford as Armagh snatch victory from jaws of defeat

While RTÉ and the League Sunday programme also came in for stinging criticism for failing to highlight the game's major talking points - whether Longford should have been awarded a free out prior to Ethan Rafferty's 68th minute Armagh goal and the black cards that were shown to Longford's David McGivney and Michael Quinn.

@OfficialLDGAA awful decision by the ref not to award Longford a free out which led to the Armagh goal. Well done Longford. We can still get 2nd place

Sunday Game quickly moved on without mentioning anything concerning Longford’s deserving, or not, of a free before Armagh scored the goal.
Would they do that with Kerry, Dublin, Donegal, or even Kildare?

The black cards weren't even highlighted and they were huge calls. I'm so fed up of Longford being treated so badly. Our players deserve better

Would ye ever give a bit of time to teams outside divisions 1 and 2.not a mention about the work counties with smaller populations put in. Longford far the better footballers there today but only talk about mcgeenys men. Typical of the snobbery that's ruining gaa.#LeagueSunday

Longford led 0-8 to 0-5 at the interval, but after 53 minutes it was 0-9 all. Denis Connerton's side were reduced to fourteen players in the 39th minute after Andrew Farrell was shown a second yellow card.

Longford were awarded a 58th minute penalty after Armagh defender Brendan Donaghy was penalised for picking up the ball in the small square and this was confidently drilled to the bottom left corner of the net by Donal McElligott, 0-9 to 1-9.

Armagh refused to lie down and in a gripping, even controversial finish, including six minutes of additional time, they stole victory from the jaws of defeat.

Ethan Rafferty’s 68th minute goal brought the teams level for the 4th and final time at 1-10 all. Then Rory Grugan pulled the trigger in the 75th minute to land the decisive point that broke Longford hearts.

Longford manager Denis Connerton felt his charges had been very badly let down by the standard of officiating, while victorious Armagh supremo Kieran McGeeney suggested differently.

Superb performance by @OfficialLDGAA with 14men! Ref played with @Armagh_GAA in the end. Free out for goal imo. Usual story! #Robbed

Even the Armagh fans admitted they got the decisions!! Plain to see. Harsh sending off -accidental clumsy hit. Free out for their goal too. The 2 key decisions!

A very strong performance by Longford against Armagh Great resilience when down to 14 men An unfair result - Some controversial decisions!Well done all involved. Move on @OfficialLDGAA @Longford_Leader @shannonsidenews

@bernardflynn15 what is with refs?? Free count 26-12, dodgy black cards and then blatant free out not given n Armagh score goal to win game!! Could be difference in going up or staying in Div 3!!