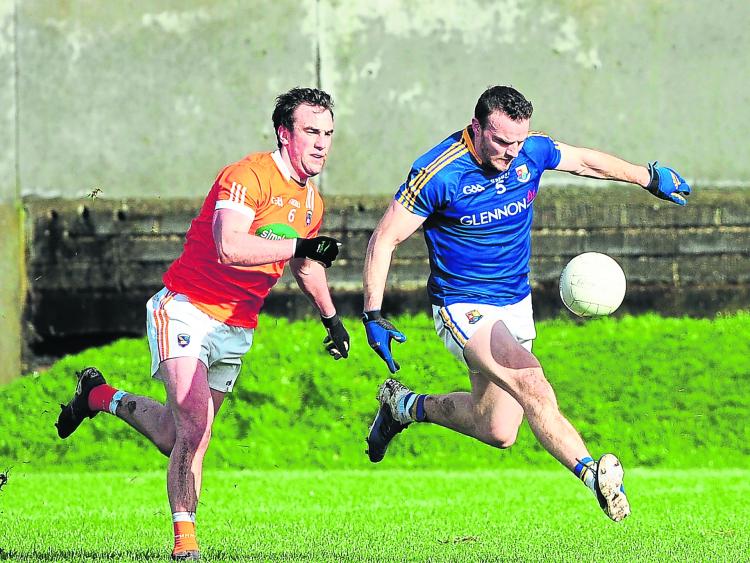 Longford were seething with anger after Rory Grugan’s 75th minute point helped Armagh snatch a dramatic 1-11 to 1-10 victory in this gripping Allianz National Football League Division 3 top of table clash in the Athletic Grounds this afternoon.

Many observers felt Longford should have been awarded a free out in the lead up to Ethan Rafferty’s 68th minute goal that brought the teams level for the 4th and final time at 1-10 all.

And the visitors, who were reduced to 14 in the 39th minute after Andrew Farrell was shown a second yellow card, were also incensed with the decision of the referee to show a black card to Michael Quinn in added time. He had earlier shown a 1st half black card to David McGivney.

Rory Grugan pulled the trigger in the 75th minute to land the decisive point that broke Longford hearts. After 63 minutes, gutsy Longford, who registered victories over Offaly and Derry in the previous rounds, led by 1-10 to 0-9 and had victory in their sights only to see it snatched from them by Armagh’s late revival.

Indeed, Grugan’s point was the first time for Kieran McGeeney’s team to go in front as it was Longford that did most of the running. Armagh did miss a lot of scoring opportunities in the second half, especially after Longford lost Farrell.

Longford led 0-8 to 0-5 at the interval, but after 53 minutes it was 0-9 all. Donal McElligott’s expertly stuck penalty goal propelled the visitors ahead however they were unable to cling on their lead.

Superb performance by @OfficialLDGAA with 14men! Ref played with @Armagh_GAA in the end. Free out for goal imo. Usual story! #Robbed

Longford began smartly and were 0-4 to 0-1 inside 15 minutes, with Robbie Smyth, David McGivney (2 frees) and Daniel Mimnagh delivering the scores.

Denis Connerton’s side were dealt a blow in the 13th minute as full back Padraig McCormack departed the fray injured and he was replaced by Peter Foy.

Armagh levelled matters for the second time by the 23rd minute, 0-4 apiece, and it was also at this stage that Longford’s David McGivney picked up a black card and he was replaced by his older brother James.

Longford dug in deep and with Andrew Farrell and Darren Gallagher doing well at mid-field it ensured plenty of possession for the attack.

Kieran McGeeney’s Armagh responded with a point and Longford closed the half with a Dessie Reynolds point. Half-time: Armagh 0-5 Longford 0-8.

Four minutes after the resumption, Longford were reduced to 14 men as Andrew Farrell picked up a second yellow card following a challenge on Ethan Rafferty. Rory Grugan converted the resulting free, 0-6 to 0-8.

Armagh wasted a lot of opportunities as they tried to make their numerical superiority count and in the 47th minute Dessie Reynolds grabbed Longford’s 9th point.

As the snow began to fall, the flood-lights were switched on at the Athletic Grounds and Armagh reeled off three unanswered points, per Ethan Rafferty (2) and Gregory McCabe  between the 51st and 53rd minutes, to level proceedings at 0-9 apiece.

Longford were awarded a 58th minute penalty after Armagh defender Brendan Donaghy was penalised for picking up the ball in the small square and this was confidently drilled to the bottom left corner of the net by Donal McElligott, 0-9 to 1-9.

Armagh refused to lie down and in a gripping finish, including six minutes of additional time, they stole victory from the jaws of defeat.

Ethan Rafferty’s 68th minute goal levelled matters for the 4th time at 1-10 all and with referee Noel Mooney indicating there were five minutes of added time, up popped Rory Grugan in the 75th minute to break Longford hearts and seal a dramatic win for Armagh.

It was the Orchard County’s 1st time to go ahead in the match and the triumph leaves them sitting pretty on the summit of Division 3 of the Allianz National Football League.

Football Division 3 Table after all* Round 3 fixtures have been played.

@bernardflynn15 what is with refs?? Free count 26-12, dodgy black cards and then blatant free out not given n Armagh score goal to win game!! Could be difference in going up or staying in Div 3!!

A lot going on in this moment of madness captured by @sportsfileollie during the Allianz Football League Division 3 game between Armagh and Longford! #GAA pic.twitter.com/4Iizs0nNKQ