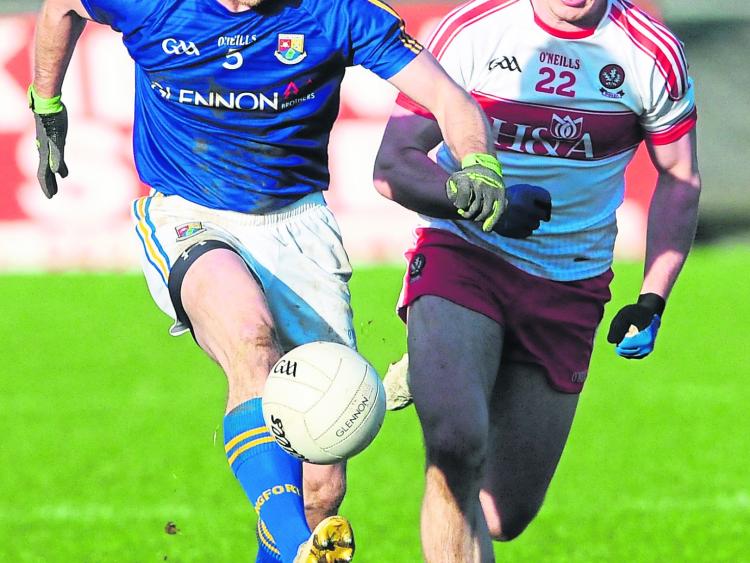 It’s odd how football can consume the mind, and sometimes preoccupy the thoughts afterwards for hours.

Longford met Derry on Sunday, and won the game by seven points.

The referee, did a fine job. He was even and balanced as much as possible, and couldn’t be faulted for anything that happened.

He was from Co Down.

One of his linesmen who operated on the stand side of the pitch in the first half, made a point of standing close to Robbie Smyth, who was taking frees. Anyone who has watched Smyth, knows that in most cases, Robbie can score virtually at will. Occasionally he puts a free wide, but it’s the exception, rather than the rule.

He’s one of the top scoring forwards in Division Three, and makes it look easy. When he misses one, it doesn’t affect the next one.

However, not on this occasion. The linesman stood within 7 metres - I’m being generous here - of Robbie every time he took a free.

This happened several times in a row, and every one Robbie missed.

When the play was on the other side of the pitch, the same linesman spent most of his time talking to a man wearing official Derry colours, who was also on the line.

It really didn’t look good. This was as obvious as the the vacant stand in the grounds.

After the break, the linesmen swapped sides, and I followed thinking that he’d do the same in the second half. He didn’t because there were no frees on his side of the pitch. However, he repeated, once again, his conversation with someone wearing Derry colours.

It seemed very odd, that an official would converse continually with any individual dressed in what were the official Derry colours.

Strange behaviour indeed. Someone should bring this to the attention of those who matter.