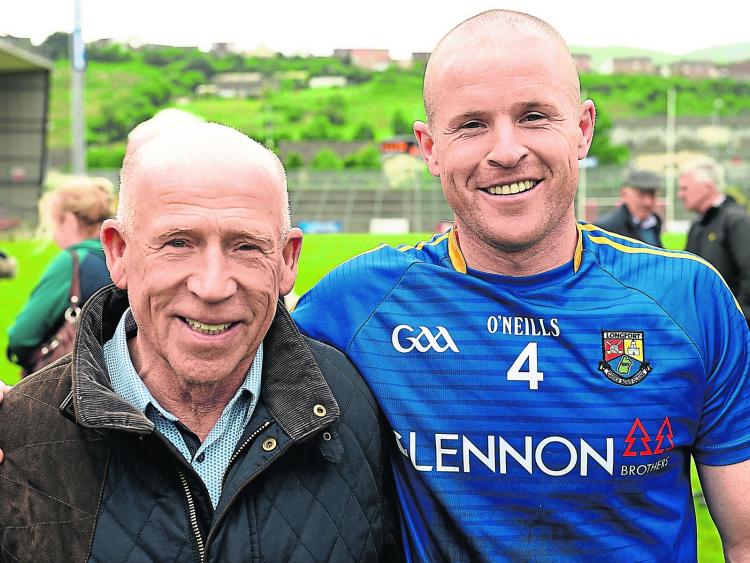 Proud father and son....Donal and Dermot Brady pictured after Longford defeated Down by 2-24 to 3-17 after extra-time in the 2016 All-Ireland SFC Qualifiers at Páirc Esler Newry.

When Longford GAA supporters venture to Glennon Brothers Pearse Park for their eagerly awaited Leinster Championship showdown with Meath at the end of May, an unsung hero and warrior-like leader of the past seventeen years will be rubbing shoulders among them.

However, a certain Dermot Brady isn’t looking forward to the prospect.

“I’ll miss the buzz. Maybe not so much the league, but jaysus come the championship, especially with Meath coming to Longford.

“It will be hard going into the Park that day and sitting on the other side looking across the fence at the players and you’d be mad to get out.”

That’s the fiery and steely determination that set the Longford defender apart.

Dependable Dermot was an ever-present in the blue and gold rearguard between 2001 and 2017 - the third longest serving inter-county footballer behind Ryan McCluskey and Stephen Cluxton - and he is unsure what type of fan he’ll be.

He joked, “I’ll tell you that this time next year so I will!”

It is that deep sense of loyalty to the county jersey that makes Dermot irreplaceable. He may not have Leinster or All-Ireland medals to show for his toil and endeavour.

Love of the game was his motivation, earning him widespread admiration among his peers and he is retiring from the inter-county arena with no regrets.

Former Donegal star, Eamon McGee, won All-Ireland and Ulster medals during his career. Yet he wrote last week: “But I like to think that if things had been different, I'd be like Dermot Brady. Love of the game is what it's all about."

Dermot reflected, “During my time, we won just three first round games in the Leinster championship - 2007 v Westmeath, 2012 v Laois & 2014 v Offaly - and this is the first year we got straight into a quarter-final - I don’t think it happened the years I was there anyway.

Kildare ace Johnny Doyle backed up that sentiment when he tweeted to wish Dermot well on his retirement. “He played the game as it was supposed to be played, tough but fair.”

Shortly after celebrating his 19th birthday in 2001, Dermot made his championship debut during a 0-11 to 1-14 All-Ireland qualifier reversal at the hands of Wicklow in Aughrim.

Michael McCormack was the manager that handed him his debut at right corner back and he recalled, “It was a big occasion for me. I was only called into the panel maybe a month before the championship and I was delighted to get playing.”

Having featured with the county minors the previous summer, it was a baptism of fire. “I remember Padraic Davis got sent off after a minute. That was setting some example for me and I do remind him of it the whole time!”

Davis himself tweeted about his former teammate: “One of Longford’s greatest ever defenders Dermot Brady has retired. Exactly as he played it, with little fuss.”

Dermot hinted that the older he got, the more he thrived, the pressure lessened and he really enjoyed his football.

“I was lucky to stay injury free and I have no scientific evidence or proof but I put it down to my work - farming and going all the time, you are not sitting down in an office. I’ve never pulled a hamstring or anything like that so I’ve been very lucky.”

In the depths of winter what motivated him to persist with the arduous training?

“I enjoyed the training and the slog. You feel better after doing it. I played for 17 years and they went by like a shot. I always believed that I wouldn’t have long, so I said to myself, as long as I was able I would keep going. As some man said to my father, Donal, I’d be long enough with a top coat on me looking at them!”

He pointed out, “I don’t think you will see many 35-year-old inter-county players in the future because of the commitment and time involved. But I was lucky enough. I live in Longford and had no travelling. Paul Barden travelled from Dublin for most of his career. Most of the time we trained in Slashers - that was only up the road for me.”

In training in recent years, Dermot has had the likes of Sean McCormack and Robbie Smyth to contend with and keep him on his vigilant defensive toes.

He has marked many of the game’s top forwards, including the vaunted Dublin Brogan brothers - Alan and Bernard, Down’s Benny Coulter and Westmeath’s Dessie Dolan.

“When I spoke to Dermot Crowe in the Sunday Independent, I forgot to mention Dessie and I marked him a good few times and always found it hard because he was cute enough. I marked Bernard in Croke Park and he was hard to handle in the wide open spaces. But no opponent was easy, they were all tough.”

Dermot isn’t hanging up his boots entirely and he’ll continue to ply his trade with his club, Longford Slashers.

“I’ll be going back with the club and I hope to be around for another couple of years.”
Slashers lead the Longford SFC roll of honour with 16 titles and Dermot raised the Connolly Cup following their hat-trick of triumphs in 2010, ‘11 & ‘13. Slashers also lost the county finals of 2006, ‘08 and ‘12 (after a replay v Killoe).

In 2013, he was captain, county final man of the match and ultimately chosen as Longford Player of the Year.

And from 2006 to 2013, inclusive, he had the distinction of being the only player to be selected on the Longford GAA Team of the Year. A massive achievement.

So why did he decide now was the time to retire the inter-county fray?

“Oh, I’m sure there were people asking ‘will that auld lad ever go?’ I was thinking about it over the last few years and threatening not to go back. I just couldn’t say no when it came to saying no.

“I’m 36 in February. I think it is time to get out. I’ve had no injuries and it is the right time to go before I start making a show of myself altogether.”

Dermot has played under the managerial guidance of Michael McCormack, Denis Connerton, Luke Dempsey, Glenn Ryan and Jack Sheedy, and like a good politician, he said they all possessed positive traits.

Dempsey, indeed, tweeted that Dermot was “Such a committed, good humoured and dedicated player. A joy for any manager.”

Not surprisingly he rates Connerton very highly and he says Longford is also fortunate to have men of the calibre of Ciaran Fox and Enda Macken in their managerial set-up.

Is stepping into management something he would consider in the future?

Dermot answers, “I haven’t given it any thought just yet, I don’t know. I’m farming away. I’ve young kids and I have been gone for a few years between training and playing. I’ll have to spend a bit more time at home. And I plan to play for another while. I have no interest at the moment but if you weren’t fit to play, you might be glad to get back involved through the management route.”

In his final year as an U-21 in 2003, Longford reached the provincial final only to suffer a heavy 1-6 to 3-13 defeat to Dublin in Cusack Park, Mullingar.

The Longford side was captained by Colmcille’s Donie McKeon and also featured Michael Kelly (Carrickedmond) and David Barden (Clonguish).

The U-21 grade, indeed, proved quite frustrating for Dermot as he also lost three consecutive county finals all against Colmcille.

Longford’s 2011 and 2012 Allianz NFL Division 4 and 3 Final victories over Roscommon and Wexford, respectively, at Croke Park are among the highlights of Dermot’s inter-county senior career.

All-Ireland qualifier victories over Derry, Down, Mayo and Monaghan, welcoming the Dubs to Pearse Park for a 2006 Leinster Championship clash and going toe-to-toe with Kerry in Killarney were other games that stand out as highlights.

“The qualifiers were always the best days we had. Beating Monaghan up in Clones in 2016 was special. We beat Louth (2-15 to 1-10 on June 18, 2017) when we probably were not expected to, so I finished up my county playing days on a winning note. I missed the Donegal match.I didn’t like it but that is the way it went. I was Best Man for a friend’s wedding out in Spain. He had asked me before I had even committed to come back to Longford.”

He remarked, “During my career, lots of results went wrong but look, after we lost, we got up and got back at it again.”

Inter-county Gaelic Football has evolved dramatically since 2001 and while he isn’t a huge fan of short kick outs, lads dropping behind the ball and the defensive running game, Dermot suggests there is little alternative but to follow suit.

He advises aspiring players to train hard and listen to the managers, and more crucially, “to do a little bit on your own and try and keep ahead of everyone else”. It is that honesty and attitude that all young players would do well to emulate.

Dermot derived great enjoyment from his years in the blue and gold and with a small player base he says Longford needs everyone.

“Longford won the Leinster minor championship in 2010. Many of them boys are now on the senior team and the U-21s of recent years are used to winning as well. So they should be coming now and staking their claim for places. I certainly think the future is bright.”

A positive note on which to end and no doubt Longford fans will always be extremely grateful to Dermot for his years of loyalty and we wish him well in his retirement.