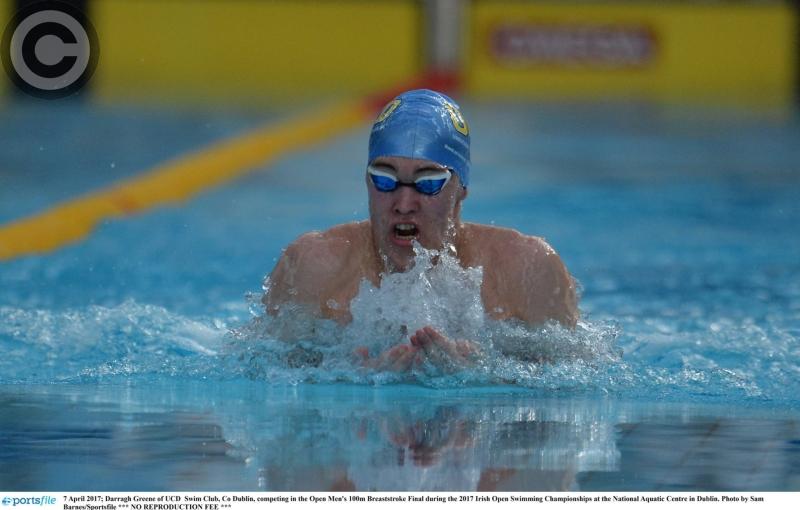 Longford swimmer Darragh Greene was part of the Irish team that competed at the European Short Course (25m) Championships at the Royal Arena in Copenhagen from Wednesday to Sunday this week.

Forty-six nations were represented in the Danish capital, and Darragh, a 50m Breaststroke World University Games finalist, was one of ten Irish swimmers in action. He competed in the 50m, 100m and 200m breaststroke events.

Coached by Earl McCarthy and swimming out of the UCD club, Darragh, competed in the heats of the 50m Breaststroke on Wednesday, December 13 and he finished in a best time of 27.65 but it wasn’t fast enough to see him progress to the semi-finals.

On Thursday, December 14, along with Alex Murphy and Nicholas Quinn, Darragh swam in the heats of the 200m Breaststroke.

Alex and Darragh were impressive with both taking significant times off their previous bests. Murphy was the fastest of three Irish competitors clocking 2:08.05, just one tenth of a second off Andrew Bree’s 2007 Irish Record (2:07.95). Greene clocked 2:11.02 while Nicholas Quinn swam 2:12.68.

Greene, Murphy and Quinn competed in the 100m Breaststroke on Friday.

Alex Murphy, swimming in the unseeded heats, dominated the field in his race in a new Irish Record of 57.69, smashing Barry Murphy’s 2013 record of 58.31. The National Centre (Dublin) athlete’s previous best had stood at 58.71, comfortably qualifying for the semi-final in a top-eight position. He finished 8th in the second semi-final for 16th place overall. Also swimming the 100m Breaststroke heats,  Darragh Greene touched in 1:00.39 and Nicholas Quinn in 1:01.53.

Swim Ireland National Performance Director Jon Rudd has been encouraged by the performances both at home and in Copenhagen "This has been a fantastic week for Irish swimming; when you consider that we have broken 13 Irish records here in Copenhagen whilst another 16 records were broken back at home at our National Short Course Championships, you have to feel that we're on the move as a collective.”

He continued “We're certainly not where we want to be yet and there is much work still to be done, but Jordan Sloan and Mona McSharry in particular have shown what Irish athletes can achieve amongst world class opposition this last few days. We're in a good place with our National Team, our National Squad and our National Centres and we're about to launch what we believe is a very exciting coach development programme through and into Tokyo 2020. Irish swimming is on the move."

GAA chief says racial abuse is on the rise in Longford