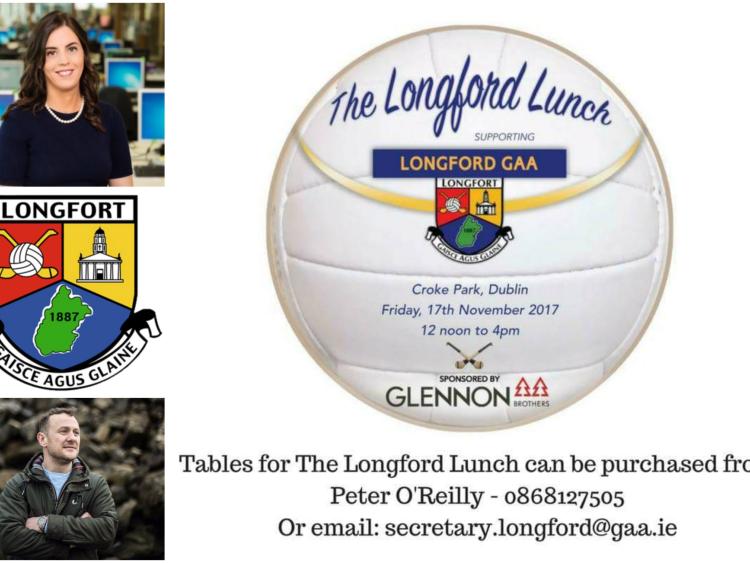 RTE and Longford's Sinead Hussey will the MC for the inaugural 'The Longford Lunch', organised by Longford GAA and sponsored by Glennon Brothers, which takes place in Croke Park on Friday, November 17 from 12 noon to 4pm.

Leading comedian PJ Gallagher will also be on hand to ensure there are plenty of laughs for guests attending.

PJ Gallagher is one of Ireland’s best-loved comedians. He is most widely known for the huge success of many characters in the hilarious and sometimes outrageous hit TV show Naked Camera, alongside his DVD of the same name, which received triple platinum sales. In 2008 he took his alter ego Jake Stevens to the US to film a new series called Makin’ Jake. Additionally in 2011, he returned with another sketch show, Meet Your Neighbours, which was also produced into a DVD.

With countless television appearances, he has become one of Ireland’s most recognized comedians. With appearances on The Late Late Show, The Miriam O Callaghan Show and Tubridy Tonight, as well as hosting The Great Big Surprise Birthday Party for RTÉ in 2012, PJ Gallagher’s Stage Fright documentary (RTÉ, 2015) and a hidden camera show called Trojan Donkey for Channel 4 in 2013.

PJ Gallagher is a Vicar Street regular and has appeared at the Cat Laughs Festival in Kilkenny and Electric Picnic. His most recent tours, Concussion and Separated at Birth (with Joanne McNally) have received critical acclaim and played to sell out audiences.

He is a graduate of the Gaiety School of Acting and performed in the 2016 Dublin Theatre Festival in Alien Documentary, directed by Una McKevittm and appeared in the feature film The Young Offenders, which won Best Irish Film at the Galway Film Fleadh.

Guest tables for 'The Longford Lunch' can be purchased by contacting Longford GAA Secretary Peter O'Reilly at 086 812 7505 or e-mail secretary.longford@gaa.ie

#LongfordlLunch Book your table now for what promises to be a memorable event on 17th November in @CrokePark @GlennonBrothers pic.twitter.com/Fs2D7I9Lxh

Longford GAA has set itself a fundraising target of €750,000 as it prepares for the future, including the refurbishment of Glennon Brothers Pearse Park, and 'The Longford Lunch' on November 17 is the first of many events to help reach this goal.