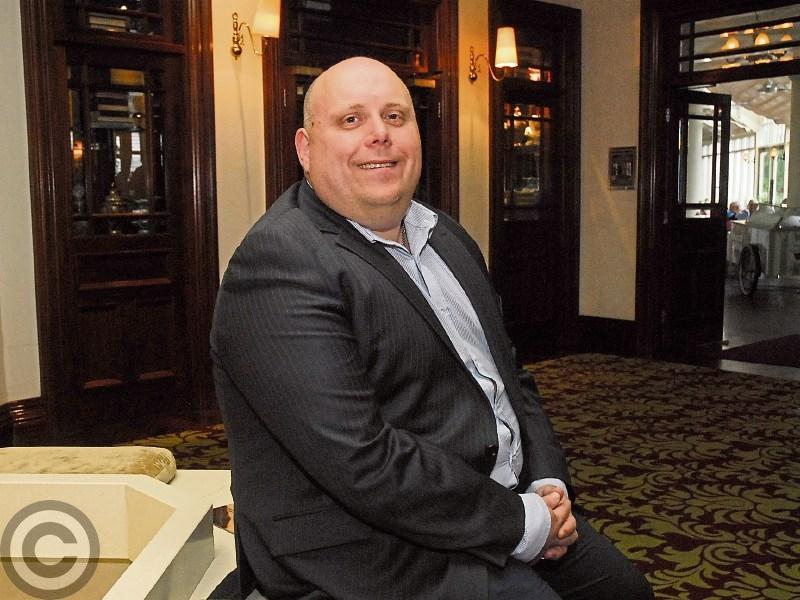 A familiar voice to Leitrim GAA and Sports fans, John Lynch hangs up his radio microphone on Friday to end more than a 20 year association with Shannonside Radio. Photo by Willie Donnellan

It marked the end of an era for sports fans in Longford, Leitrim and Roscommon recently as Shannonside FM Head of Sport and commentator John Lynch stepped down after over 20 years giving us the lowdown on sport in the region. John Connolly, Sports Editor of our sister newspaper The Leitrim Observer, caught up with John ahead of his departure to look back over his career behind the mic and his views of the future of the GAA.

A career that started off with a competition on a children's TV programme ends one major chapter this Friday and starts into a new era when John Lynch hangs up his microphone as Head of Sport with Shannonside radio.

A native of Arigna, John has been the voice of Leitrim GAA on local radio for well over 20 years but it all started with an encouraging teacher who saw something that John himself didn't!

When John met up with the Observer in The Landmark Hotel, the question naturally arose as to how he got his start - “I started off initially with the station in 1993, just after doing my Leaving Cert.

“There used to be a tv programme on RTE at the time known as Jo-Maxi. Paraic Noone, a teacher of mine in the Vocational School in Drumshanbo, we had a volleyball team in the All-Ireland Final and for some bizarre reason, I ended up doing the commentary on the video and Paraic’s son Patrick was on the team.

“Pataic saw a lot more in the video than I ever did, submitted it to RTE, I don’t know if anyone else entered the competition, Des Cahill was one of the Judges and it won the Video category.

“So as a result of that, a couple of weeks later thanks to the Leitrim Observer, there was a photograph in the paper, Willie came down to the school to take a photograph with the sponsors, and a couple of the teachers.

“And a couple of days later, Seamus Duke and Joe Finnegan ring up from Shannonside, the Community Games were coming up in 1993 and I covered those down in Mosney. I remember going down on the train to Mosney.

“It went from there and from 1996 I went in covering as the Leitrim GAA correspondent, doing a little bit of studio work, updates and it evolved from there and then back in 2006, I joined up full-time as head of sport.”

OF course, nothing lasts forever and John is looking to pastures new as he leaves Shannonside this weekend and looks to the future with anticipation, even if it was an incredibly tough decision to leave Shannonside.

“It was a decision I thought long and hard about it but basically it comes down to the fact that I’ve got a very young family and a hugely supportive wife who has been hugely patient down through the years.

“But there are so many things that I have missed that maybe you take for granted on a Saturday. All of these things were put on the back burner, I was gone every Saturday morning at 10 am, you mightn’t get back till eight or nine and there could be some event on that night when I’d be emceeing and it would be the same again on Sunday.

“You might have matches on at any particular time and there was an awful lot of that that was eating into family time.

“We were at a stage where you had to think long and hard about it and you had to think about balancing it all up and maybe try something different for a while. It was very full on and time consuming over the last 11 years as well.”

But John isn’t giving up the microphone completely and will still be a familiar voice on the airwaves as he intends to freelance on local games - “I’m finishing up full-time employment on September 22, but I’ll be staying on doing a few commentaries on games.

“I wouldn’t like to switch off the microphone, I’d like to be still involved in doing the odd Leitrim game as well and not completely end the association as well, more so in a freelance capacity rather than been involved to the level I was.

“The future is very much an open book at this stage, I have a lot of other projects, some media related that I haven’t really gone in depth to over the last couple of years and they are something I really would like to pursue.

“But most of all, to get a bit more weekend time with the family, see how that goes and do a few normal things and maybe get to a few Man United matches as well.”

John is also pleased with the way Shannonside connected with the audience even if it can lead to controversy from time to time. “When you are putting out nine hours of broadcasting over the weekend and sometimes it is higher and then you have sports bulletins during the week, passions are going to run high.

“We made a conscious decision years ago that we would do an awful lot more on the analytical side.

“The match commentary is obviously central to what we do on any given Saturday or Sunday but what happens after the match, everybody who comes out automatically turns on their car radio and want to hear what the so-called experts and so-called analysts are saying.

“We took that approach to give people what they want in that we are providing a platform, going into analysis after the game. What I would say about the pundits, we don’t just pick them off the street, they are guys who have been there, earned the t-shirts and we would very much feel that they have something to offer in that role, they speak their minds, passions run high from time to time.

“Not everybody is going to agree with it, not everybody agrees with Pat Spillane or Joe Brolly on The Sunday Game either.

“There are situations that can be difficult but it is part of the territory, the whole thing never gets personal and people realise we are there trying to do a job and in any walk of life, you are not going to necessarily agree with somebody 100% of the time.

“But people realise we are trying to provide a service in a professional capacity and I’d have no problems with it. No more than players, we’re going to come in for criticism from time to time, referees aren’t always happy down throughout the years.

“You do get an awful lot of hassle but it comes with the territory. As you get a little bit older and a little bit more experienced, you get a bit more thick skinned, it is water off a duck’s back.

“So you never think about it too much as long as you can meet the people out afterwards, have a good chat with them and shake hands and then after that, it is really a non-issue.”