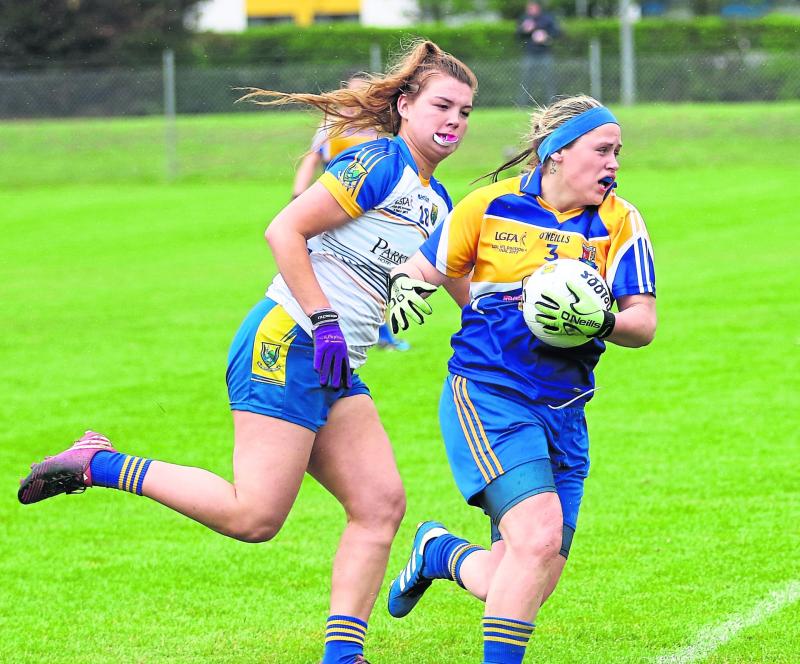 Leanne Keegan pictured in action for Longford against Wicklow in this year's National League Division 4 Final. Leanne will line out with Mostrim in the Ladies Senior Championship Final v Clonguish.

There will be an unusual look to the Ladies Senior Championship Final at Glennon Brothers Pearse Park on Saturday due to the fact that for the first time since 2005 Killoe Ladies won’t contest the Senior Final.

It was Clonguish who dethroned Killoe in the semi-final and they will be hoping to claim the title they last won in 2015 when they meet Mostrim.

On that day the Newtownforbes side stopped Killoe from achieving an astonishing six county titles in a row. Clonguish were also out to avenge previous final defeats at the hands of Killoe.

Clonguish lost one game in their championship group and that was against Killoe. They had a fine win over Mostrim in their opening game. The senior championship was very competitive this year with Clonguish topping the group ahead of Carrickedmond on the head- to-head rule, thus setting up a home semi-final against their great rivals Killoe.

Mairead Moore has proven to be one of the best players in the country while her sister Caitriona works tirelessly. Clonguish will be looking from big games from these girls. After being a part of Longford’s U-16 All-Ireland win last year Niamh Darcy has been propelled to the county senior panel and has cemented her place in the defence.

Another county player for Clonguish is Ailbhe McGowan while Mostrim’s defence will need to be at their best to contain excellent county forwards Aoife Darcy and Aisling Greene.

Mostrim will be hoping to go one better this year after losing out to Killoe last year. They competed very well in the league and had a fine win over Killoe in the championship. They were dealt a huge blow earlier this year when ace forward Sarah Tierney sustained a nasty knee injury. She is a massive loss for Mostrim but they have got big players who they can turn to on Saturday.

Like Mairead Moore, Leanne Keegan has been one of Longford’s top performers over the years. She’s back fully fit now after a bad injury and is a rock in the Mostrim defence. Her sister Lisa is the Mostrim netminder after returning to the panel this year and she is very solid.

Briana Connell is another defender Mostrim will look to in trying to thwart the Clonguish attack; she has the pace and ability. Louise Monaghan makes a welcome return after a long-term injury and is vital to the Mostrim forward line while Emer Monaghan was exceptional in the semi-final scoring 2-2 and will pose a big threat for the Clonguish defence.

Both sides are in contention for a League and Championship double and have to replay their league semi-final after the county final.

Mostrim will have learned a lot from last year and will be fearless going into this final but Clonguish’s greater experience might just prove to be the difference in what promises to be a close game.