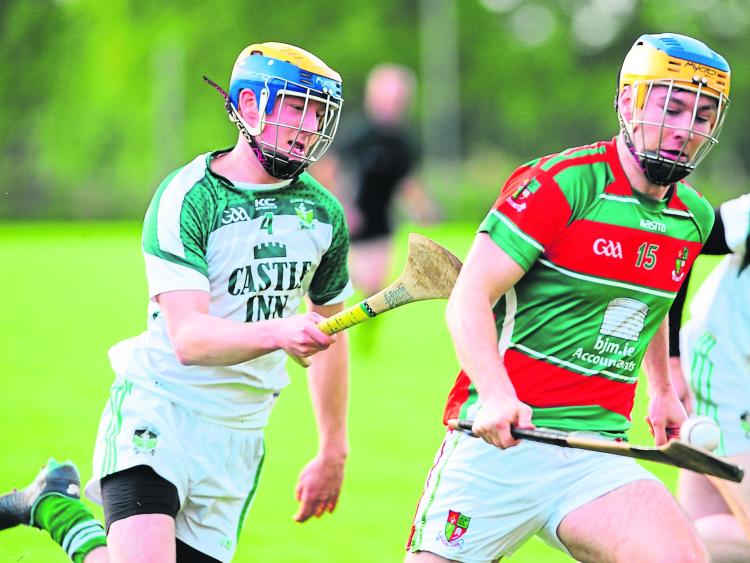 John Mulhern on the attack for Wolfe Tones Mostrim in breaking away from Clonguish Gaels opponent Oisin Flanagan. Photo by Declan Gilmore

Despite finishing the game with 13 players, Wolfe Tones earned a narrow one point victory over a very determined Clonguish side in the third round of the Senior Hurling Championship played at Michael Fay Park on Saturday evening last and in doing so qualified for this year’s County Final against Longford Slashers on October 1 next.

Wolfe Tones had to call on all of their experience to win this one and on the balance of play Clonguish deserved at least a draw but they failed to capitalise on their numerical advantage plus a very lack lustre performance from their opponents who relied on the accuracy of John Mulhern who contributed eight points from placed balls.

Clonguish were quickest to settle and after five minutes had opened up a 3 point lead with Joe O’Brien (0-2, one free) and Ciaran Corcoran on target.

This lead was wiped out shortly afterwards when a speculative ball from Sean Noonan found Sean Browne on the edge of the square and he buried the ball past John Minnock in the Clonguish goals. Wolfe Tones went into the lead after 8 minutes with a Mulhern free and he added another on 12 minutes to extend that lead to two points.

Clonguish remained patient and got back level with two points from O’Brien and Corcoran. Indeed they went into a two point lead themselves on 27 minutes when O’Brien pointed from a free after an earlier point from Paul Barden.

It was the Newtownforbes side that were playing the better hurling at this stage and knowing that nothing less than a win would be good enough for them they looked as if they would upset the favourites. However they allowed the opposition back into the game with two soft frees which Mulhern converted and the sides went into the break level at 1-4 to 0-7.

The second half began with an excellent point by Martin Coyle to give Tones the lead once more but this was cancelled out yet again by O’Brien who swung over a delightful sideline cut from a tight angle.

It was indiscipline again that was the downfall of Clonguish and they trailed to two Mulhern frees with 37 minutes elapsed. The ever reliant O’Brien cut the deficit to one with another placed ball but Wolfe Tones extended their lead to three with a point from John Newman and another free from Mulhern.

Clonguish were handed a lifeline on 48 minutes after O’Brien, who was through on goals, was hauled to the ground by Thomas Stakem and referee, Derek Heffernan, pointed to the spot, O’Brien fired the resultant penalty narrowly over the bar.

With 10 minutes of the game remaining Wolfe Tones seemed to press the self-destruct button when brothers Thomas & Benny Stakem both received their marching orders and it seemed as though Clonguish would push on from here. They managed to get back on level terms with only two minutes remaining with two O’Brien frees and a Corcoran point from play which were countered by a Mulhern free.

Despite the numerical advantage Clonguish could not regain the lead; surprisingly they chose to deploy both free men in their own full back line when it would have been wiser to push them forward.

With time nearly up and a draw on the cards up stepped Coyle for Wolfe Tones, he gained possession on the halfway line and after an excellent run calmly pointed to give his side the luckiest of victories over a very disappointed and distraught Clonguish team who probably deserved more.