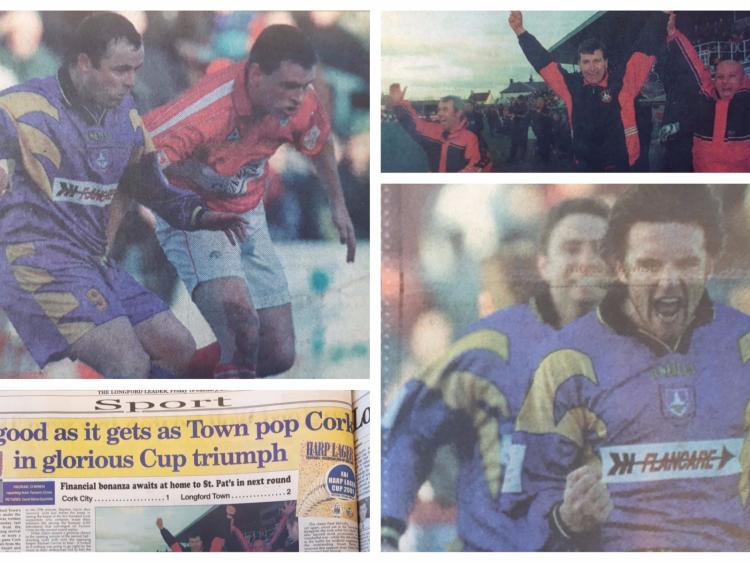 As Longford Town get ready to face Cork City in the Irish Daily Mail FAI Cup quarter-final at City Calling Stadium on Saturday (kick-off 7.30pm), we look back to sixteen years ago and recall a famous ‘Town victory.

Here is Padraic O’Brien’s match report from that memorable win. We hope you enjoy it...

“Another chapter in Longford Town's remarkable success story under the Stephen Kenny regime was written at Turner’s Cross on Sunday last when the little club from the midlands staged a stunning revival in coming from behind to score a sensational win over big guns Cork City with second half goals from the unrelated Byrne boys – Stuart and Niall – earning the Premier Division newcomers a financial bonanza at home to St Patrick's Athletic in the last sixteen of the FAI Cup on February 3.

After crashing to their fourth league defeat on the trot against bang-in-form, Bray Wanderers less than 48 hours earlier, the Town made the long trip south more in hope than in confidence – particularly as they were minus the services  of key players Stephen Kelly and Keith O'Connor who were forced to retire injured at the Carlisle grounds on Friday night.

It was some job for the Longford manager to lift the morale of his under-strength side for such a big game and while two super saves by Stephen O'Brien prevented certain goals in the early stages of the game, Cork City eventually broke the deadlock in the 34th minute when a speculative shot by Derek Coughlan was deflected by the unfortunate Town defender Eric Smith into the corner of the net past the unsighted O'Brien.

Up until then, the Town were finding the going very tough against the dominant home side and after conceding that gift goal when the danger should really have been cleared, they now faced a real test of character in the face of adversity.

However, never-say-die Longford gradually awoke from their slumber in the closing stages of the first half and after Shay Zellor went very close with a header in the 37th minute, Stephen Gavin shot narrowly wide just before the break in raising the hopes of the few hundred loyal supporters who certainly made their presence felt among the bumper 4500 attendance that converged on Turners Cross for the second round replay. 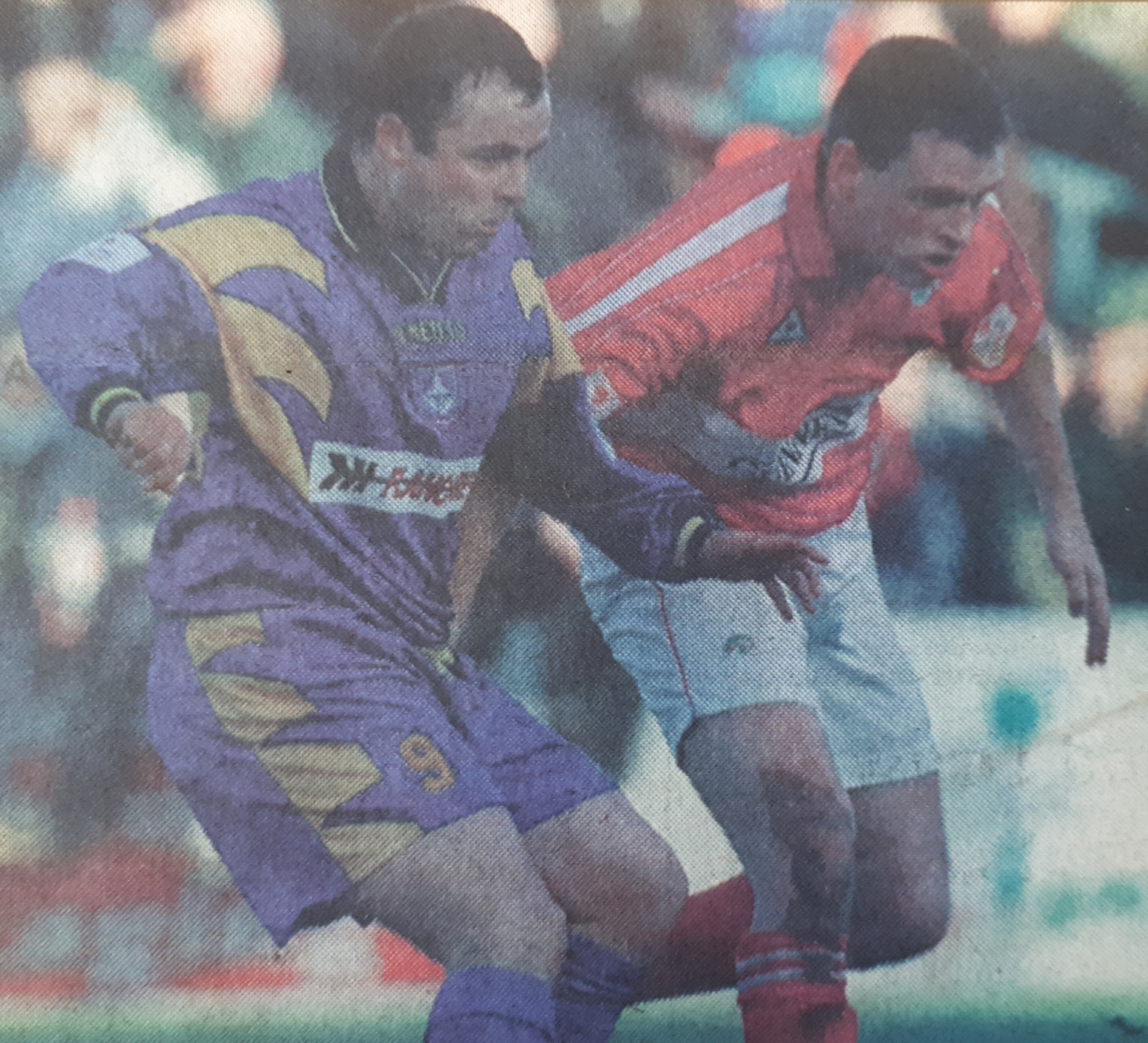 When Zellor missed a glorious chance in the opening minute of the second half – shooting wide with only the opposing keeper Michael Devine to beat – it looked as if nothing was going to go right for the Town in their determined bid to halt the recent slide but a richly deserved equaliser eventually materialised with 51 minutes gone on the clock.

Moments after a header by Mark Herrick produced a fine reflex save from Stephen O'Brien that stopped Cork from attaining a commanding advantage, Longford were awarded a free-kick just outside the box following a foul on Niall Byrne.

While Wes Byrne's effort was blocked down by the City wall, the rebound broke kindly for Stuart Byrne who let fly with a right-foot rocket that ended up in the back of the net with Cork keeper Devine making a gallant but vain attempt to prevent Longford's high quality opening goal.

However, the introduction of livewire substitute Tony Tynan made a big difference as Cork regained their grip on the game and the talented youngster posed major problems down the right flank during the remainder of what had now developed into a most exciting and entertaining contest.

Tynan had only just come on when he almost put Cork back in front in the 65th minute, only to be denied by Stephen O'Brien who was unquestionably Longford's saviour on this unforgettable occasion.

Stephen got down well to stop Tynan's close range effort and after Mark Herrick squandered an opportune chance when shooting wide moments later, O'Brien came to Longford's rescue  yet again when getting a vital touch to Pat Morley's point blank header following a goalmouth scramble in the 72nd minute.

The ball was subsequently cleared off the line by none other than striker Shay Zellor – who was back lending a very vital hand to the under pressure defence – and the same player was then in the thick of the action at the other end as he created the opening for what proved to be the winning goal in the 79th minute.

Giving plenty of room by the slack Cork defence, Zellor found himself in wide open  space as he knocked the ball through to the inrushing Niall Byrne and while his initial shot was stopped by the advancing Cork keeper, Devine failed to hold on to the ball and Byrne was left with the simple task of tapping his second attempt into the empty net.

The Town were now on the verge of a famous victory over the team that won the Cup only three seasons ago and while Zellor went to within inches of scoring a third goal when heading just over the bar in the 84th minute, Cork came desperately close to grabbing the equaliser a couple of minutes later when a firmly struck header by Derek Coughlan was cleared off the line by Paul McNally – who had a superb game in the heart of the Longford defence. 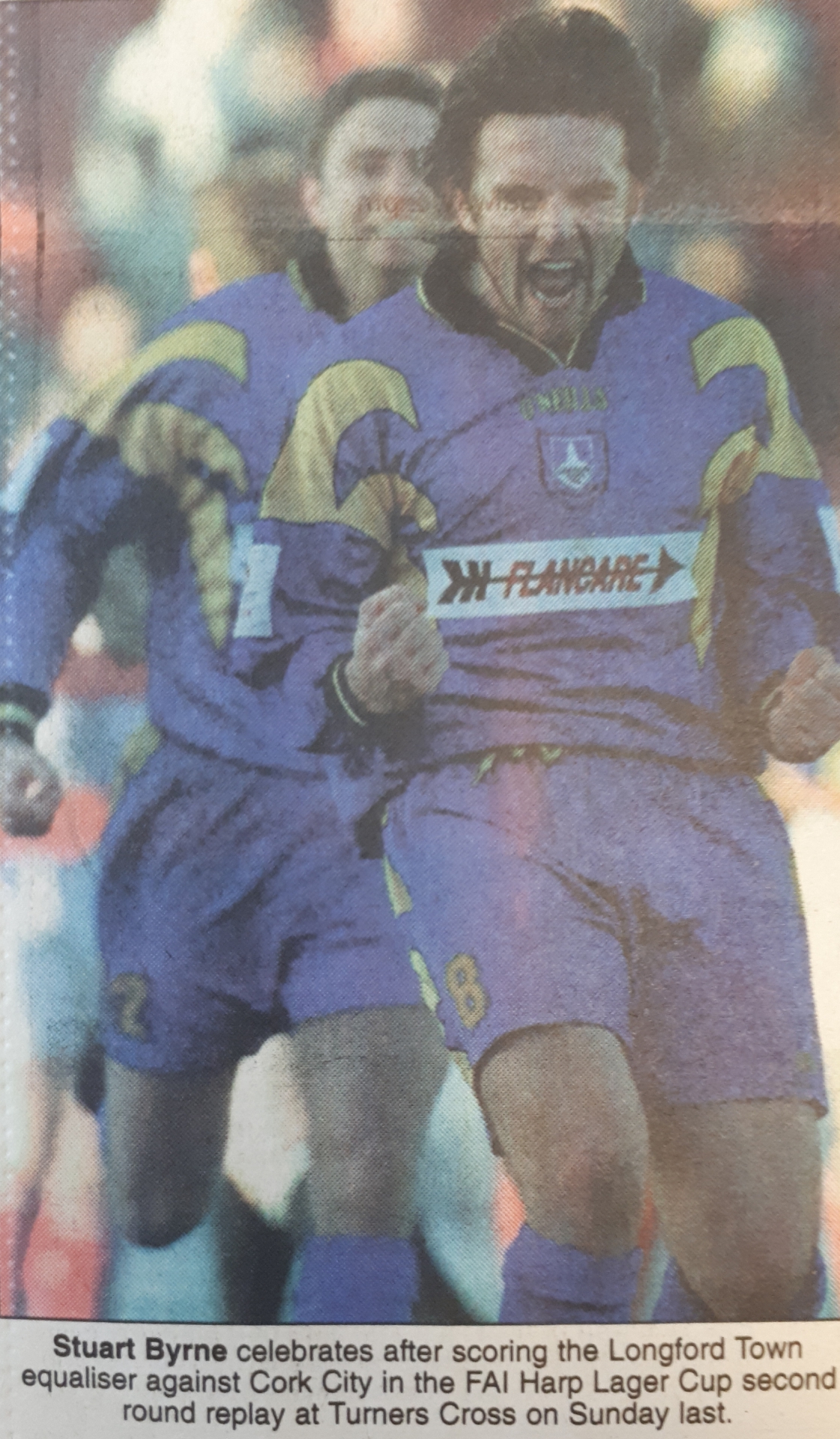 That was a very lucky escape indeed and as  the clock ticked away, the home side were reduced to ten men when Mark Herrick – having been booked a few minutes earlier – lost his cool completely in his ugly retaliation on Stuart Byrne and this left referee John McDermott with no choice but to brand the foolish Cork midfielder with a red card.

That nasty blow was struck in the 88th minute and while Cork continued to press forward in the so tense closing stages, they were unable to find a way past the inspired Town netminder Stephen O'Brien who played such a major role in his side’s success.

When the referee eventually blew the final whistle five minutes into time added on for stoppages in the second half, there were scenes of wild celebrations and the delighted Longford supporters spilled on to the pitch to congratulate their heroes on achieving a wonderful result at such a difficult venue.

Cork City are rarely beaten at Turners Cross and while they certainly had the better of the scoring chances, they failed to put them away and paid a heavy price in making a surprise early exit from the Cup.

It was Vinny Perth's 90th minute equialiser that prevented Longford Town from going down under in the drawn encounter at Flancare Park the previous week and his goal may well turn out to be the most important strike of the season.

Critics get their answer

The critics who doubted the ability of this talented Town squad – following the bad run of four league defeats on the trot in slipping down  the table in recent weeks – certainly got their answer in Cork and confidence will be high for the crunch Premier Division clash against Finn Harps at Flancare Park on Saturday night next.

Team manager Stephen Kenny was literally 'over the moon' as his side got back on the winning trail and while he and his highly committed players can now look forward to a most attrative home clash against St Partricks Athletic in the third round of the cup on the first Saturday night in Febraury, the league continues to be the main priority.

Ironically that massive victory over Cork on Sunday last was Longford's first since they came from behind to beat the same opposition in the Eircom League clash at the Strokestown Road grounds on Dec 2nd and City have now failed to beat the Town in four meetings this season.

Goalkeeper Stpehen O'Brien kept his side in the game in making those two great saves in the early stages of what was generally a cracking Cup tie and a vast improvement on the rather disappointing drawn encounter.

After doing so well to keep out a point-blank header from Stephen Napier in the 8th minute, O'Brien then brilliantly parried a beautifully struck free-kick by Mark Herrick that was heading for the top corner of the net in the 12th minute and the Town no 1 has certainly been a real thorn in Cork's  side this season.

POLL: Fancy yourself as a soccer pundit? Predict the winner of Longford Town v Cork City in FAI Cup quarter-final 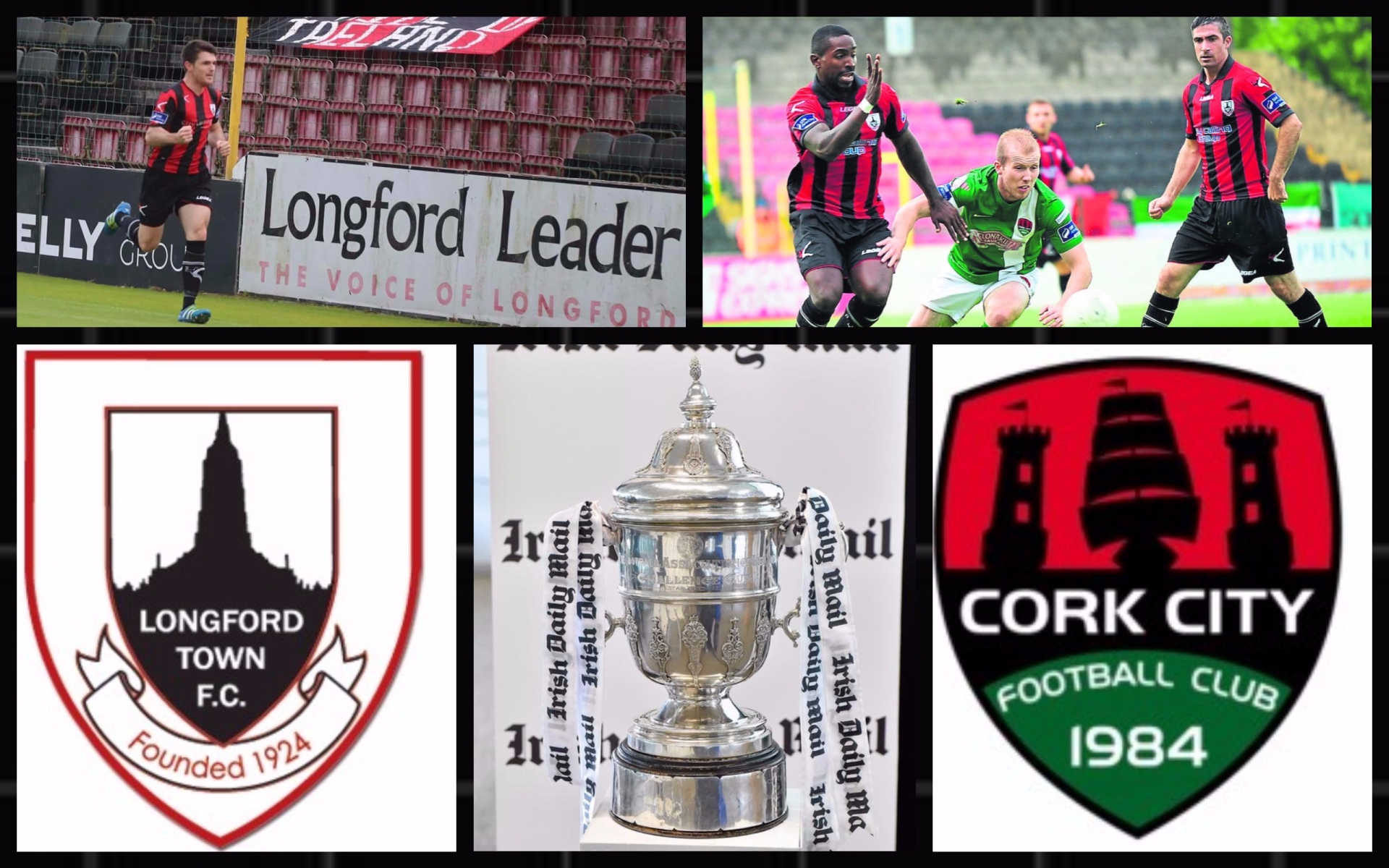 The classy Paul McNally, yet again, stood out in the Town defence alongside the rock solid Eric Smith – who also figured most prominently in the wonderful win – while the star of the show in the battle for midfield supremacy was the outstanding Stuart Byrne, who received fine support from Vinny Perth in the second half revival.

Up front, both Niall Byrne and Shay Zellor gelled well together in posing  plenty of problems for the Cork defence  when the Town finally got their act together and what a time for Byrne to score his first goal for the club.  The former Liverpool reserve was  playing just his third competitive fixture since his return from a long term ankle injury and is a big asset , to say the least.

Ballinalee lad Sean Prunty was also in the first eleven for the F.A.I. Cup replay having made his debut for the  Town in the low-key Leinster Senior Cup first round tie against Kilkenny City earlier in the week but sustained a knock which forced him to retire with just 22 minutes gone on the clock.

The overall picture for Longford is now looking a lot brighter following their tremendous exploits at Turners Cross and after registering their first win in eight games, the Town are now back on track and in the mood to start collecting some more valuable league points in their quest to retain their treasured Premier Division status.

A win over Finn Harps this weekend would certainly be a big step in the right direction and another huge attendance  is expected at Flancare Park – particularly in the aftermath of that memorable Cup win over Cork City that was as good as it gets and will hold a special place in the history of Longford Town FC.

Read the views of Longford Town manager Neale Fenn ahead of the clash with Cork....