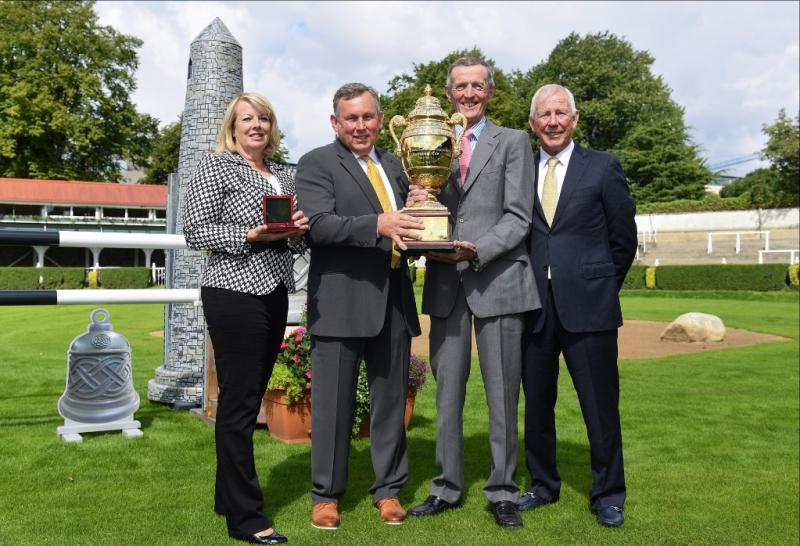 Longford showjumping legend Eddie Macken, along with three-in-a-row Aga Khan winning team mates of 1977 to 1979 were honoured at a Legends’ Lunch hosted at the Croke Park Hotel by the Association of Sports Journalists in Ireland (ASJI).

The quartet is widely regarded as the most talented Irish showjumping team ever assembled and while Paul Darragh died in 2005, the remaining members of the team were on hand last Friday to reminisce on their time in the saddle.

They were joined at the event, hosted by ASJI and sponsored by Devenish Nutrition, by friends and colleagues from across the world of equestrianism and other sports.

The team’s win in 1979 marked the fifth and most recent time the Aga Khan trophy was won outright, following a jump-off with Great Britain.

Kernan and Macken would both go on to represent Ireland at the Olympic Games, while Con Power’s son Robbie is a well-known national hunt jockey, having won the 2017 Cheltenham Gold Cup aboard Sizing John.

Speaking at the event, Peter Byrne, President of ASJI, explained the reason the association chose to honour these showjumpers.

“The foursome of Darragh, Kernan, Macken and Power brought great pleasure to those of us who remember with fondness their equestrian careers, especially those heady days of the late seventies when the nation came to a standstill to watch them complete the remarkable feat of winning the Aga Khan three years in a row”, he said.

Owen Brennan, Executive Chairman of Devenish Nutrition, spoke of the team effort the riders displayed in winning the three-in-a-row.

“The achievement by the riders of three Aga Khan successes in a row speaks of their ability, commitment and a real team effort”, he said.

“It is this team effort that is key to success across sport and business. Success is something that should be celebrated, and we're delighted to be here and to have been able to support such a fantastic event”, he continued.