Killoe come storming back to snatch a draw against Longford Slashers 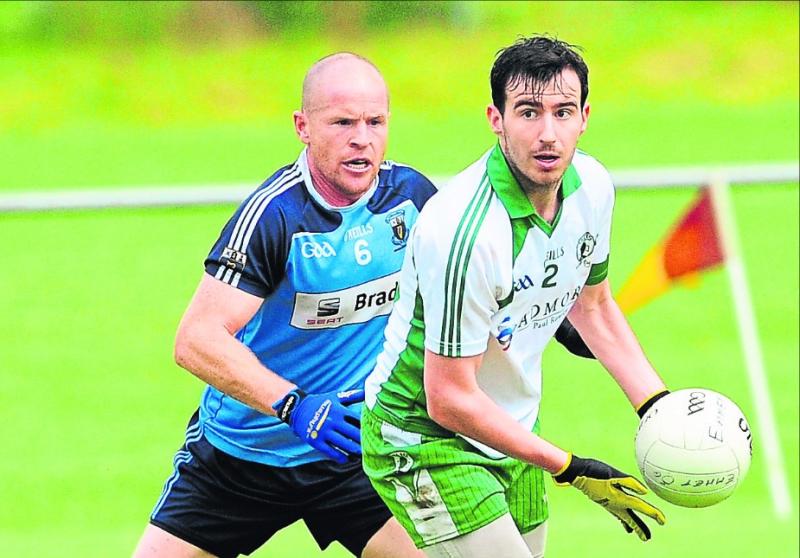 Mark Hughes on the attack for Killoe Emmet Og in his attempt to evade the challenge of Longford Slashers defender Dermot Brady.

Nine points behind (2-7 to 0-4) when Robbie Clarke scored a cracking goal for Longford Slashers in the 22nd minute of the first half, Killoe showed a lot of character in storming back to snatch a draw in this entertaining Senior Football Championship second round clash played at the Monaduff grounds, Drumlish on Sunday last.

Slashers looked like holding out for a surprise win when Colin Smith kicked over a glorious strike from play in the 57th minute to leave his side two points in front but Emmet Og refused to panic and late points from Daniel Mimnagh (who started and finished the move) and Denis McGoldrick (a free in the first minute of stoppage time) left the sides all square in the finish.

This result means that Killoe are through to the quarter-finals while Slashers will battle it out with Dromard to determine the remaining qualifier from Group 1.

Killoe, who were without injured trio Daniel Keogh, Shane Dowd and Ronan McGoldrick who all started in the opening round win over Dromard, produced a poor performance in the first half and conceded the first goal in the 19th minute when a mistake by Liam Hughes gifted Slashers a penalty which was duly converted by Sean Clarke.

Right-half-back Clarke also fired over a couple of points in the early stages and he was excellent throughout the game for Slashers who were minus the services of the injured Barry Gilleran.

Midfielder Andrew Dalton also figured most prominently for the sky-blues, particularly in the first half, and when Robbie Clarke scored the second goal - just after Colin Smith smacked a shot against the post - it appeared that Killoe were in big trouble.
Having said that, Daniel Mimnagh should have got a goal for Emmet Og when he was clean through in the 17th minute but his point-blank shot was deflected by the Slashers keeper Colm Farrell for a ‘45 that was converted by Michael Quinn.

A brace apiece (all frees) from Sean McCormack and Denis McGoldrick, with Seamus McCormack also on target, accounted for the other Killoe scores in the first half while Colin Smith fired over four points (three frees) for Slashers.

Niall Mulligan was also on the mark and that was really putting it up to Killoe but they made a strong start to the second half with a point from the impressive Daniel Mimnagh along with a badly needed goal from a penalty converted by Larry Moran with four minutes gone on the changeover.

The sides then shared a further six points with Colin Smith (free), Peter Foy and keeper Colm Farrell (‘45) getting the Slashers scores while Sean McCormack (two frees) and Denis McGoldrick replied for Killoe.

Two more Emmet Og points in quick succession through Sean McCormack (free) and Paddy Kiernan left just the minimum of margins separating the sides (2-10 to 1-12) by the 55th minute.

And the game eventually ended in a draw with Slashers finishing with 14 players on the pitch after Niall Mulligan was sent-off for a second bookable offence in the 60th minute.