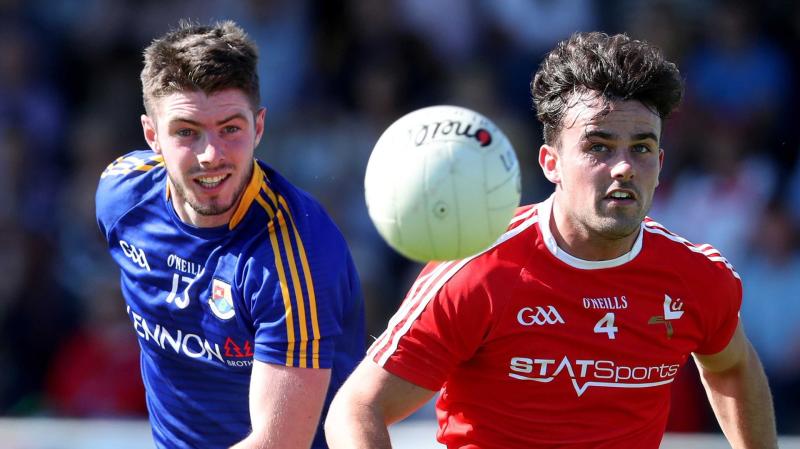 Longford’s terrific record in the All-Ireland SFC Qualifiers continued this evening as Denis Connerton’s fired up charges sprung a surprise in Drogheda to defeat Louth; 2-15 to 1-10.

It was the second year in a row that the ‘Wee County’ failed to get past the first hurdle in the Qualifiers, whereas Longford will be hoping for a repeat of the heroics they produced in 2016 when they accounted for Down (after extra time) and Monaghan in rounds one and two, before ultimately bowing out at the hands of Cork in Glennon Brothers Pearse Park.

In the sweltering heat, the counties were deadlocked on three occasions during the opening 29 minutes (0-3 all 17 mins, 0-4 all 26 mins and 0-5 all), before Longford, playing in their 33rd qualifier contest since their introduction in 2001, struck for an unanswered 1-4 either side of the interval and this effectively put the contest beyond the grasp of the ‘Wee County’.

Three points from the boot of Robbie Smyth and another from defender Barry Gilleran ensured that Longford, who were defeated by Laois in the opening round of the Leinster Championship, enjoyed a 0-9 to 0-5 interval advantage. Two minutes into concluding half, Liam Connerton drilled a penalty to the net, giving the visitors a commanding seven points cushion, 1-9 to 0-5.

Colin Kelly’s Louth, defeated by Meath in the Leinster quarter-final, did manage to reduce the deficit to three points at one stage, 1-9 to 1-6 after 43 minutes, but resilient Longford kept them at bay and Barry McKeon’s 63rd minute goal put the icing on the cake.

Longford will now join fellow Round 1A winners Laois, Derry and Sligo in the Round 2A draw and these four counties will be drawn to play against Clare, Mayo, Meath or Kildare and Tyrone or Donegal. The draw is on RTE Radio One on Monday morning at 8.30am.

Aided by a slight breeze Longford took the game to Louth in the opening half with Robbie Smyth in fantastic form kicking over five points, including a wonderful point from the sideline just before the break.

It was Smyth that set Michael Quinn up for the game’s opening score in the fourth minute. Three minutes later he hit over his first point of the game. Points were traded between James Califf (free) and Smyth before John Bingham and Califf drew Louth level in the 17th minute.

Louth went ahead for the first time in the 21st minute, 0-4 to 0-3, through Califf but Longford levelled with a pointed free from David McGivney. Longford were dominating the play but squandered quite a few chances.

Liam Connerton edged Longford ahead in the 25th minute but Jim McEneaney levelled in the 28th minute.

In the final five minutes of the half Longford enjoyed a purple patch and made their possession show on the board. Smyth (2 frees) and a point from corner back Barry Gilleran put them three ahead before Smyth hit over a wonderful score from a sideline ball to give his side a 0-9 to 0-5 half-time lead.

Longford’s advantage  was extended to seven points in the 37th minute after they were awarded a penalty. Anthony Williams was penalised for handling in the small square and Liam Connerton tucked away the spot-kick, 0-5 to 1-9.

Louth got a much needed point in the 41st minute through sub Ryan Burns and two minutes later Eoin O’Connor goaled to cut the gap to three points, 1-6 to 1-9.

Longford responded well with points from Dessie Reynolds, and frees by  Smyth (2) and David McGivney to restore their seven point cushion, 1-6 to 1-13.

The Wee County tried to get back into the game but anytime they went on the attack they were met by a resilient Longford defence.

Longford’s star man Robbie Smyth was sent off for a second bookable offence in the 57th minute and Louth worked hard to make their numerical advantage count. Tommy Durnin hit over a point in the 58th minute but three minutes later he was shown a second yellow and was sent off.

Louth were dealt another blow when Longford got their second goal through the excellent Barry McKeon, 2-13 to 1-8.They ended the game with 12 men as Patrick Reilly (2 yellows) and Ryan Burns (straight red) were sent off.