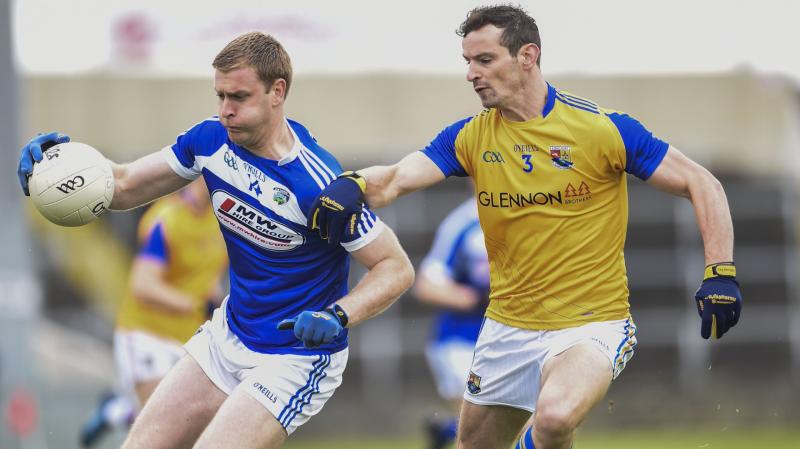 O’Moore Park Portlaoise has never been a happy hunting ground for Longford over the years but this defeat to the home side will rank as one of the most embarrassing.

From the start Laois were on top but Longford were very much architects of their own downfall. They conceded two goals both sides of the break and they were never going to recover from those blows.

Longford set up very defensive to try and curtail the Laois threat but it didn’t make much difference in the opening five minutes as Laois opened up a 0-4 to 0-0 lead.

Robbie Smyth hit over two frees either side of a fine Donie Kingston point as the home side continued to put scores on the board. Smyth was Longford’s main threat and he hit over a fine point in the 13th minute to cut the lead to three points.

Laois though replied with Brendan Quigley, Padraig McMahon and Kingston (free) firing over points to give the O’Moore County a six point lead in the 17th minute.

Longford though gradually began to get back into the game with Smyth and Sean McCormack causing problems. Smyth scored three points while McCormack pointed a lovely score to cut the deficit to just two points in the 26th minute.

John O’Louglin got a much needed point for Laois in the 27th minute but Longford were on the attack again with Barry McKeon going for a point when in a good position for a goal. His effort was signalled wide, the linesman called over the referee but the Wicklow official didn’t overrule his umpire.

This was to prove costly for Longford because Laois went down the field and carved open the Longford defence with Niall Donoher getting the game’s opening goal. It got worse for Longford less than one minute later when Laois got their second goal through Kingston which left Denis Connerton’s charges trailing 2-10 to 0-7 at the break.

Things got even worse for Longford four minutes after the changeover when Laois got their third goal; a mistake in the Longford defence allowed Alan Farrell in to score a goal.

In the 41st minute there was 15 points between them when the younger Kingston brother Paul raised the green flag as he scored Laois’ fourth goal.

Longford lived off scraps and found it hard to get scores. They did however manage to fire over three points in a row – Smyth, Liam Connerto and Darren Gallagher but Laois again hit back with a point from wing-back Darren Strong.

Kingston once again was on target before he was replaced while Connor Berry and Smyth (two, one free) got late scores for Longford in this disappointing defeat.

Laois progress to meet Kildare in the provincial quarter-final while it is the qualifier route yet again for Longford boss Denis Connerton and his charges.