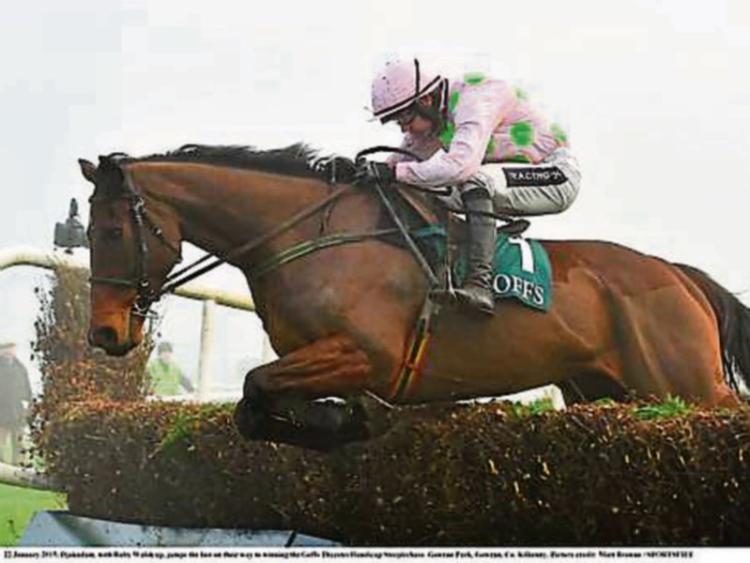 DEFI DU SEUIL (2/1) for Phillip Hobbs is a warm order favourite here having won each of his five starts since October 2016, including a comfortable 13 length success over EVENING HUSH. He will go on the ground without any fuss, and will prove more than popular given his reputation. However, I am going to forgive CHARLI PARCS (7/2) his latest effort where he fell at Kempton last month. Before that, he saw off the useful yardstick, MASTER BLUEEYES, who re-opposes here, by eight lengths when carrying five pounds more. Like DEFI DU SEUIL, MASTER BLUEEYES too has beaten EVENING HUSH by a wide margin, and that puts a further gloss on CHARLI PARCS' form with that rival. The Irish challenge is a muddle of three horses who have punched each other out at various times over the last few months. BAPAUME (12/1), MEGA FORTUNE (7/1) and LANDOFHOPEANDGLORY (16/1) all hold winning form against one another at some stage, so I am going with the biggest priced one of them to fill the placings. He was unsuited by testing conditions most recently, and should enjoy today's conditions much more. On good to yielding at Fairyhouse in December, he accounted for both BAPAUME and MEGA FORTUNE, and I think he can run a big race here for Joseph O'Brien.

NORTH HILL HARVEY (6/1) is likely to go off favourite in this, and despite his good run to be ninth in an exceptional Supreme Novices' Hurdle last year, and his run to be fourth behind BUVEUR D'AIR (2017 Champion Hurdler) at Aintree a month later, I am opposing him with MICK JAZZ (10/1). This talented sort has been running with credit since moving from Harry Fry to Gordon Elliott, and the Meath handler has had quite a few primed this week. MICK JAZZ saw off CILAOS EMERY last month, and perhaps more importantly, was just a length in arrears to Tuesday's ultra-impressive Supreme Novices' Hurdle winner LABAIK when they met at Navan in November. I think Joseph O'Brien also has a decent hand here with IVANOVICH GORBATOV (10/1). He was miles behind PETIT MOUCHOIR in the Irish Champion Hurdle recently, but previously had decent form behind the likes of World Hurdle hero NICHOLS CANYON and Mare's Hurdler winner APPLE'S JADE, a horse he actually beat in last year's Triumph Hurdle at Cheltenham on similar ground. Another 2016 winner, DIEGO DU CHARMIL (16/1) is the last one for the shortlist on the back of a comfortable win at Musselburgh in preparation for this recently. He was impressive in winning last year's Fred Winter, and at a big price, he can run Paul Nicholls' yard into the place money.

Look no further here than DEATH DUTY (2/1) who the in-form Gordon Elliott reckons is one of the best he has in the yard. That's high praise indeed and his form book is also impressive. He's won four on the spin since last October, the best of which came just last month when he put nine lengths between himself and TURCAGUA. Before that in December he had the talented and re-opposing MONALEE behind him. It's hard to be bullish this week, but this DEATH DUTY could be one of the bets of the week. I think MONALEE can actually chase him home again having followed that runner-up run by comfortably seeing off BATTLEFORD last month. WHOLESTONE will probably be in the frame for Nigel Twiston-Davies, who has had a quiet week, but can finish with a flourish if this one, a winner in four of his last five, runs up to form. ANY DRAMA (25/1) is one at a bigger price that can get involved coming off the back of a cosy victory at Exeter a few weeks ago, where he won by 15 lengths.

THISTLECRACK was a warm order favourite for this open-looking Gold Cup before his withdrawal last month, leaving his stablemate and Welsh National winner NATIVE RIVER the 3/1 favourite. Colin Tizzard's scopey chaser is an out and out stayer and has won his last three races, including a three-length success over LE MERCUREY in the Denman Chase at Newbury last month. However, DJAKADAM (4/1), who has been the runner-up in the last two runnings of the Gold Cup, coming up against two stars on both occasions in the shape of DON COSSACK last year and CONEYGREE in 2015, takes the vote here. He has had the ideal preparation for this year's edition. He had a pleasing workout after racing at Leoparstown ten days ago and lost nothing in defeat to OUTLANDER in the Lexus Chase at Leopardstown over Christmas. He had beaten the same rival the race before that in mid-December having been off the track since April 2016. OUTLANDER (10/1) will re-oppose in the Gold Cup for Gordon Elliott and could pose a huge threat to his shorter priced rivals. Each-way backers will be latching on, but I think it is worth taking the risk on the ever consistent DJAKADAM who has been primed to win this race by the master that is Willie Mullins. Another each-way option is the lightly raced MINELLA ROCCO (20/1), who beat NATIVE RIVER at last year's Cheltenham festival, and is therefore known to enjoy the track. He has had major problems this term, unseating and falling in his two latest starts, but his ability is undoubted if he stays on his feet. His price reflects the poor build-up but in an open Gold Cup, and with such good form at the track to his name, a small each-way punt on Jonjo O'Neill's charge could not be discounted. Colin Tizzard's pair of NATIVE RIVER and CUE CARD should run well, but CUE CARD fell here last year when the pace increased and there is a few in this that will make it another real test. DJAKADAM is teak tough and is not to be underestimated against those two.

Another good renewal of this race and ASKTHEWEATHERMAN (7/1) is a leading English hope, but takes a huge step up in class and is untested against rivals of this level. It's unoriginal but I think ON THE FRINGE (7/4) will win this again for Enda Bolger. ON THE FRINGE has won this race for the last two years on the trot and has done nothing to suggest he's losing his touch. A good second to the high-class FOXROCK last time out was a good prep run for this and I can't see him faltering here. PACHA DU POLDER (20/1) is an each-way option, having been 5th in this last year, just 2 lengths down on the winner. He prepared for this with a good win over GRAND VISION at Bangor last month, and could well follow that by running into a place here. MENDIP EXPRESS (50/1) is massively overpriced given his course form. He was eighth in this last year, and was within five lengths of ON THE FRINGE on their most recent clash at Punchestown in April 2016, and although he failed to win on his seasonal re-appearance, he'll be sharper today and could outrun his huge odds.

This is always a tough race to work out and it is one that calls for each-way betting. I take three against the field here at varying each-way prices. They are BATTLEFORD (9/1), CASTELLO SFORZA (12/1) and I SHOT THE SHERIFF (20/1). BATTLEFORD runs for the resurgent Willie Mullins yard and has very good form to his name and a five-pound claimer on his back. He's been second to MONALEE and THE STORYTELLER on his last two starts, both of which are good animals. He has good festival form too having been second to BALLYANDY in last year's Champion Bumper on similar ground, and he just lost out by a nose that day. CASTELLO SFORZA (12/1) ran fourth in the same race and has run well in defeat since to the likes of JOEY SASA and MOSSBACK. I SHOT THE SHERIFF (20/1) makes the shortlist having returned from a lengthy lay-off to be third behind HIDDEN CYCLONE on March 5, and will strip fitter for that outing. He had good form in 2015 beating the likes of TTEBOB and VELOCITY BOY. I give him a good chance of running well here for connections.

Another each-way heat which will gather plenty of interest as the curtain falls on another Cheltenham Festival. There are quite a few interesting ones taking to the line but LE PREZIEN is a worthy favourite and is not too short at 7/1. He has good form, including a good run behind TOP NOTCH recently, who was himself second to YORKHILL on Thursday. He's beaten the likes of L'AMI SERGE and HAMMERSLEY LAKE recently, and was a close-up second to CHARBEL at Uttoxeter last October. ROCK THE WORLD (11/1) can be given a chance having been laid out for this, despite some pretty dismal runs lately. He was third in this while carrying a pound more than today, and Robbie Power can guide him into the reckoning. VELVET MAKER (12/1) could also run into contention under Denis O'Regan. He was well down the field in this last year but ran well to be fourth behind GRAND PARTNER at Leopardstown last month and he meets DANDRIDGE (5th in that race and a market principle here) on much better terms in this one and will give his rider a good run.