Records broken during spectacular night of international athletics at AIT 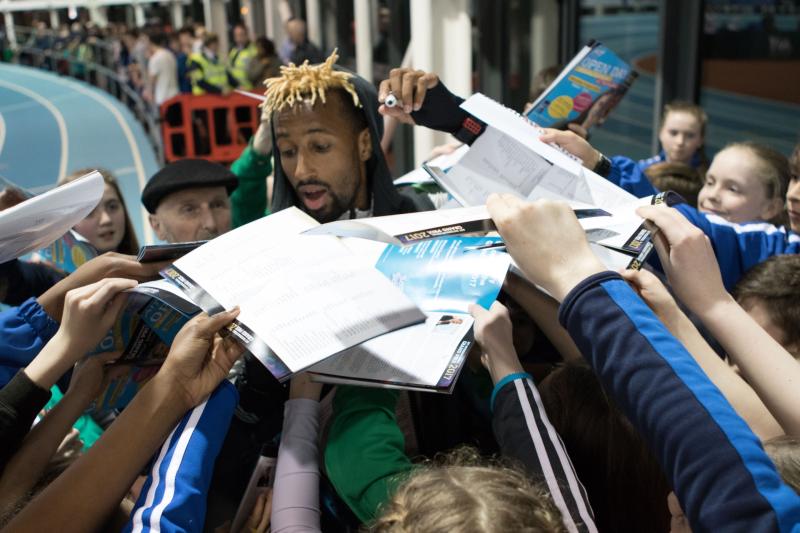 The fourth annual AIT International Grand Prix was a spectacular event on Wednesday, February 15. As always the ten events on show didn’t fail to deliver to a sell-out crowd at the midland venue.

Highlight of the night was Christina Manning’s time of 7.82 which was the second fastest in the world this year and the only person who has run faster is the current world record holder.

The Irish contingent competed admirably with solid performances and with notable success in the women’s 1500m where Ciara Mageean and Kerry O’Flaherty both dipped under the required Athletics Ireland European qualifying time.

Meet Director, Professor Ciarán Ó Catháin, said that, “the fourth annual event has brought the grand prix to a new level. The fields were full of talent, European championship standards and numerous national records. The atmosphere was electric and I must take this opportunity to thank our very generous sponsors without whom this event would not be possible. Our feedback from the competing athletes is very positive and many have expressed a wish to return again to AIT.   This bodes well for the 2018 event where we hope to grow the event in the world rankings. "

Former Olympic champion Sally Pearson AUS was beaten into third place by winner Christina Manning USA who ran a stadium record and all comers’ record of 7.82. Sharika Nelvis USA took second place. Manning’s time was just seven hundreds of a second outside of a world lead.

The women’s 60m was won by Lekeisha Lawson USA in a rapid time of 7.20 seconds which was only eight hundreds of a second outside of Barbara Pierre stadium record which was set in 2016. Ghanian Flings Owosu-Agyapong was a close second in 7.26 and Irelands Phil Healy posted an impressive 7.31 to take third place.

AITs Grace Lawlor and Vicky Harris both reached the final and will have gained invaluable experience at this level.

British long jumper Lorraine Ugen (pictured) claimed the long jump prize with steady progressions before topping off at 6.54m. Chantel Malone from the British Virgin Islands finished second with a jump of 6.40m. Milena Mitkova BUL and Malin Marmbrandt SWE rounded out the top four places with jumps of 6.18m and 6.14m respectively. 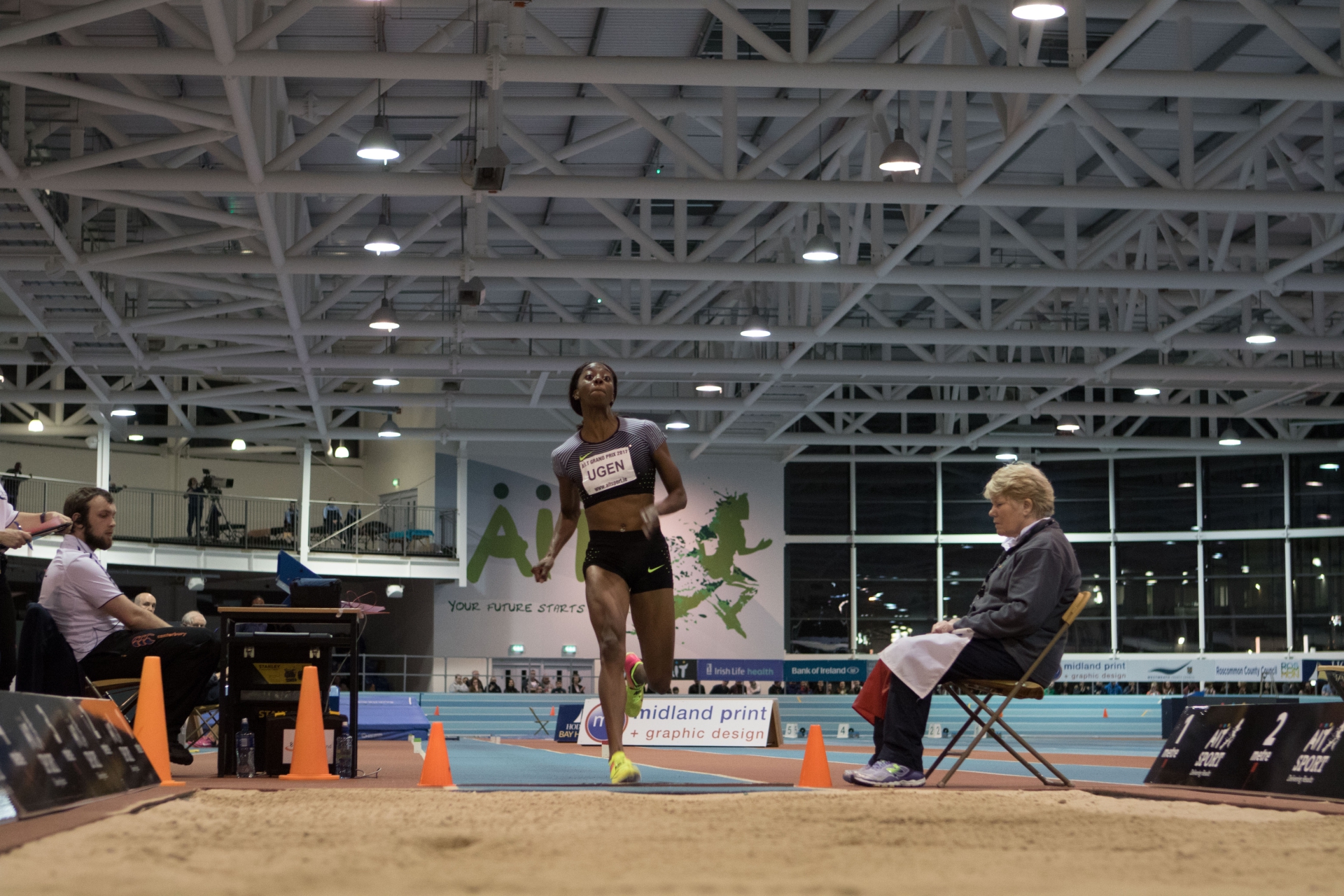 D’Angelo Cherry returned to defend his 2016 title at his ‘favourite European track’ but pulled a quad muscle in the final meters to finish third in 6.69. Sean Safo-Antwi GHA broke Cherry’s stadium record of 6.58 by bringing the mark down to 6.56.

One of the most exciting events of the night was the men’s high jump. While the event never reached the standard of 2015 when Mutaz Barshim broke the Asian record with a jump of 2.41m, Jamal Wilson of the Bahamas lifted the crowd with some very solid jumping. He topped out with an event wining jump of 2.23m which was 3cm higher than runner up Mike Edwards ( 2.20) of GB. Croatian Alan Melon edged out Matthew Roberts GB on countback for third place, but cleared 2.15m.

The very strong women’s 1500m field was blitzed by Romanian Claudia Bobocea who set all comers and stadium records with a run of 4.08.19, this is also a new personal best and Romanian national record. The highly fancied Australian Zoe Buckman edged Briton Sarah McDonald into third place with a time of 4.11.18.

Ciara Mageean ran a brave time of 4.12.46. Unfortunately Bobocea was the only athlete in the race to hang in with the pacer Sofie Van Accom from the gun. Seven Europeans ran under European indoor championship qualifying standard. Mageean and Kerry O’Flaherty comfortable ran under the above European indoor standard which was 4.16.00

Former world medallist Melissa Bishop was at AIT to defend her title, she won in 2016. Indeed she ran her indoor PB of 2.00.19 in Athlone and claimed 1st place again in the 2017 AIT International Grand Prix. She may be a little disappointed with her winning time of 2.01.42 but this is still clearly world class running.

Latvian Liga Velvere LAT ran a PB of 2.02.18 to come second ahead of Stina Troest of Denmark in third place with a time of 2.03.72. Galway woman Alanna Lally just missed out on a PB as she ran 2.08.38 but competing in this exalted company will have done her the world of good.

The much vaunted Erik Sowinski USA (pictured) was pipped on the line by a fast finishing Kyle Langford GB (pictured). Langford posted all comers and stadium records in this irregular distance race with a finishing time of 1.16.10 which was five hundreds of a second faster than Sowinski. Langfords time was also a new British record. 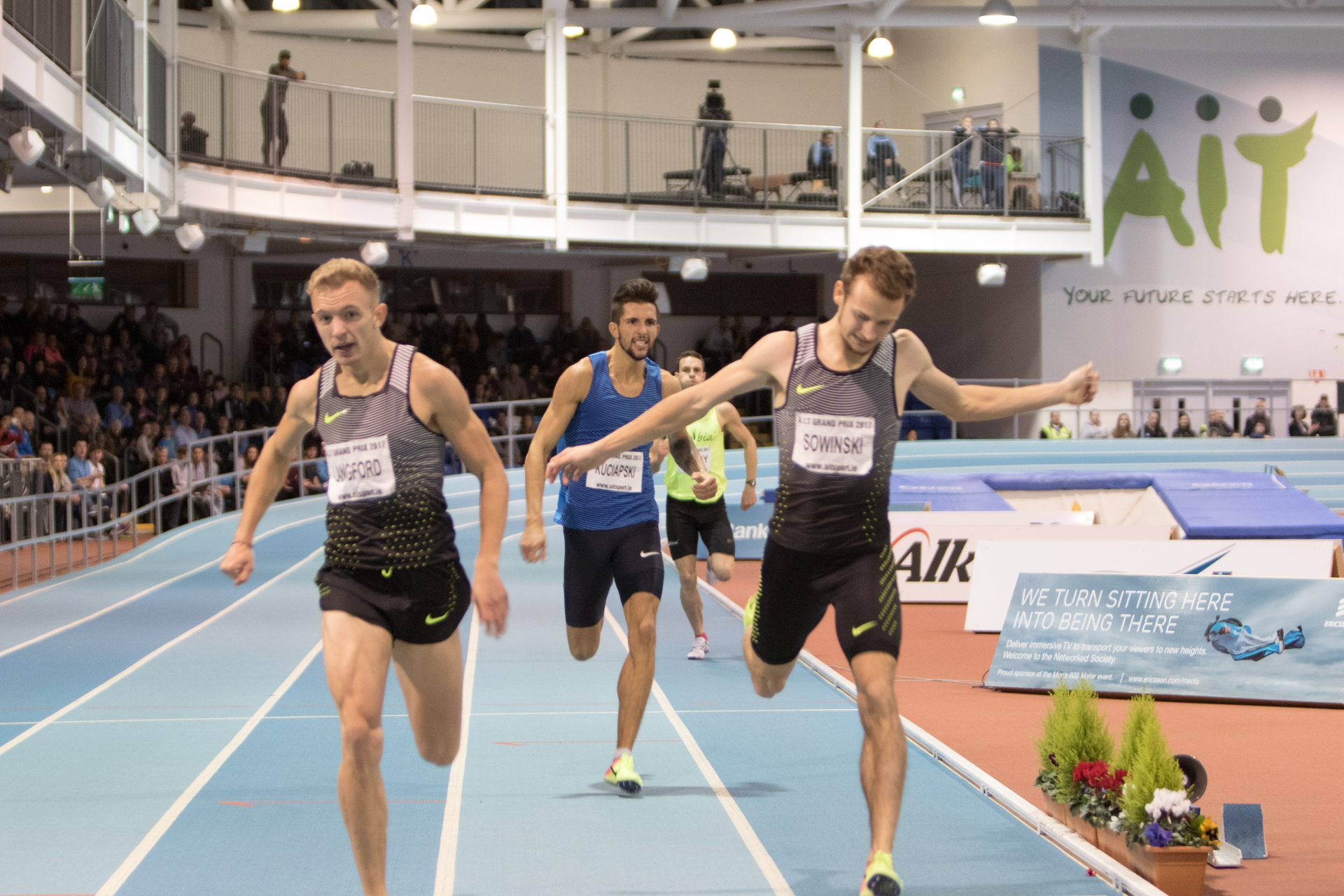 Returning athlete Sebastian Rodger was the winner of the men’s 400m in a time of 46.57 seconds, this time was half a second slower than Pavel Maslak’s and Brian Greegan’s stadium record which stands at 46.07.

A close second was Patrik Sorm from the Czech Republic with a time of 46.87 seconds. Luke Lennon Ford of Great Britain completed the podium in a time of 47.14.

The men’s mile is always a much anticipated event at the GP and a world lead was witnessed in 2016 through the effort of Davit Wolde. In 2017 the winner was race favourite Ryan Gregson of Australia with a sub 4 minute mile of 3.56.49. He also completed the 1500 m in 3.41.43.  Two seconds back in second place was Swede Johan Rogestedt in 3.58.11, as he became the first Swedish man to run a sub 4 minute mile indoor. He was followed closely in third by British miler Tom Marshall in a time of 3.59.84.

We are still awaiting for the first Irish man to run sub 4 minutes for the mile indoor in Ireland. 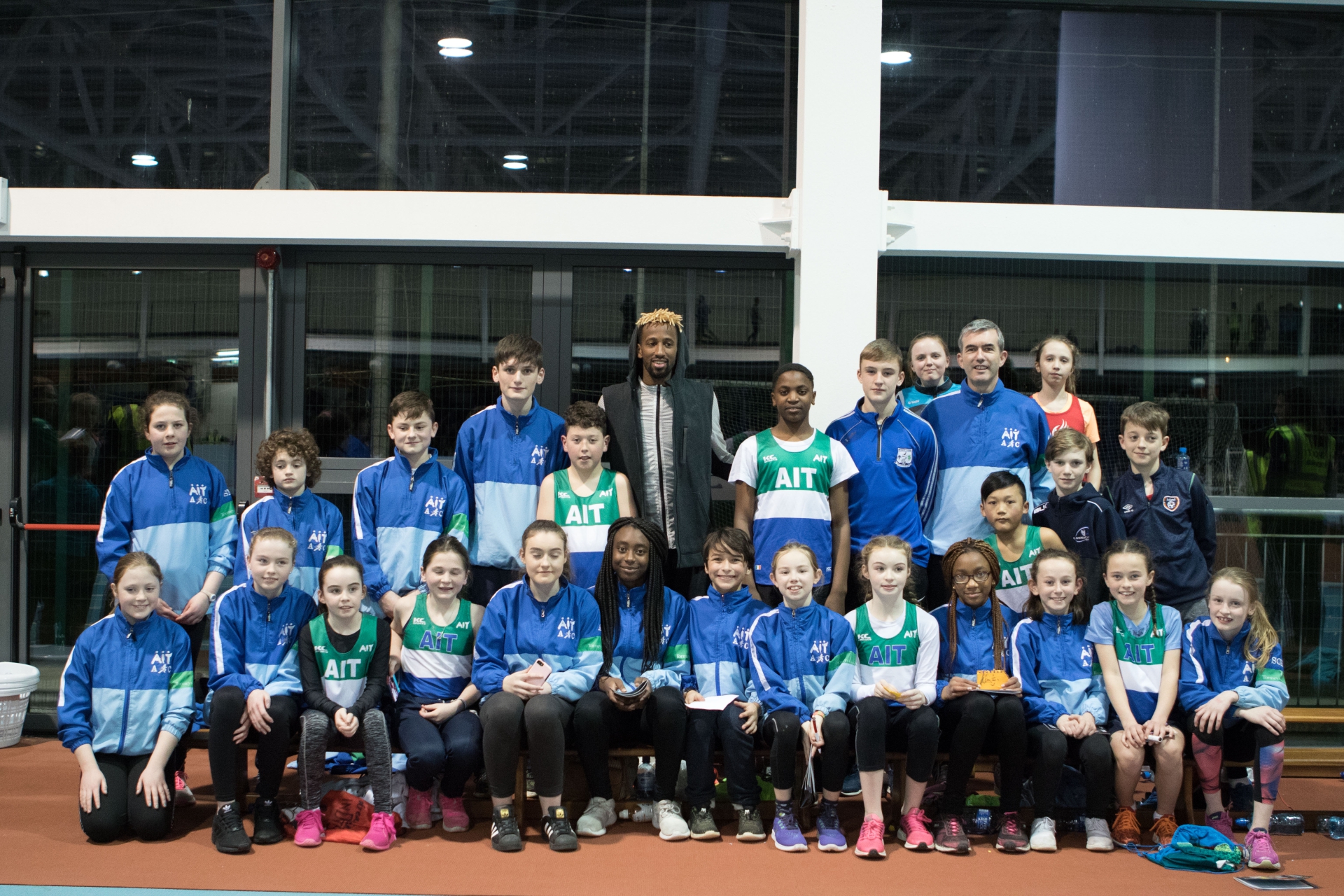