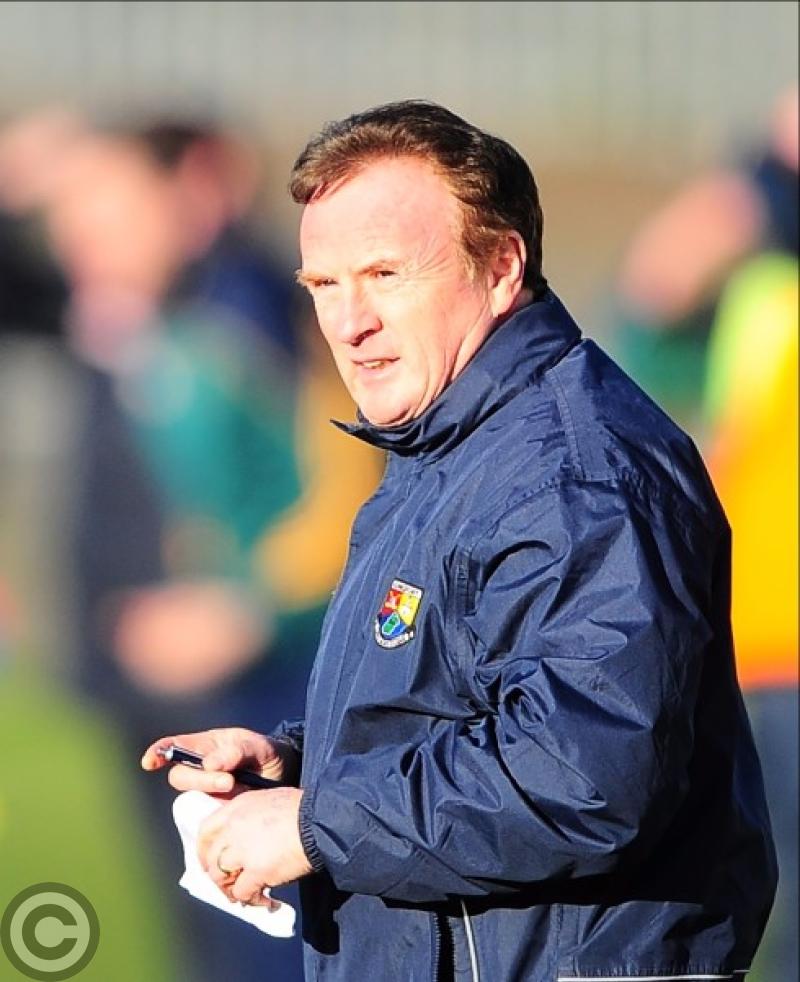 Longford manager Denis Connerton watching his side in action against Offaly in the National Football League Division 3 opening round game at Glennon Brothers Pearse Park on Sunday last.

With the pressure off to a certain extent following the good win over understrength Offaly in the opening National Football League Division 3 fixture at Glennon Brothers Pearse Park on Sunday last, the county senior footballers are now facing a tough task away to Louth, throw-in 2pm.

Getting a positive result in Drogheda is difficult to achieve as many Longford teams have found out on quite a few occasions in the past but the return of Diarmuid Masterson and Darren Gallagher is a big boost after both were unable to feature against Offaly due to suspension.

With injuries ruling out Michael Quinn, Brian Kavanagh, Michael Brady, Mark Hughes and Andrew Farrell at the moment, manager Denis Connerton will be hoping that Robbie Smyth recovers from the nasty ankle gash he sustained in the second half of last Sunday’s game.

Smyth was forced to retire in the 59th minute after playing a major role in the vital victory against Offaly, clocking up seven points (four frees), and Longford certainly cannot afford to be without such a key player on Sunday next.

Newly promoted Louth will be in a confident  frame of mind following their most impressive 2-16 to 0-10 win against injury hit Laois on Saturday evening last and providing the main threat will be Andy McDonnell, Padraig Smith and Ryan Burns who scored 2-8 between them in a great result at O’Moore Park.

Managed by former player Colin Kelly, Louth succeeded in reaching the O’Byrne Cup final after beating Meath in Navan at the penultimate stage but missed chances cost them dearly as they suffered the disappointment of defeat in the Leinster tournament title decider at home against what was effectively a ‘third string’ Dublin team.

Back in Drogheda, the Louth players will be determined to make the most of home advantage in the so competitive Division 3 and will be hard beaten in the aftermath of the high of hammering Laois who were badly hampered by the absence of several regulars.

But this is still a good opportunity for Longford to take another step in the right direction in the bid to avoid a relegation battle and should they manage to overcome Louth then promotion to Division 2 becomes a possibility for Connerton’s charges.

Round 2 Fixtures on Sunday