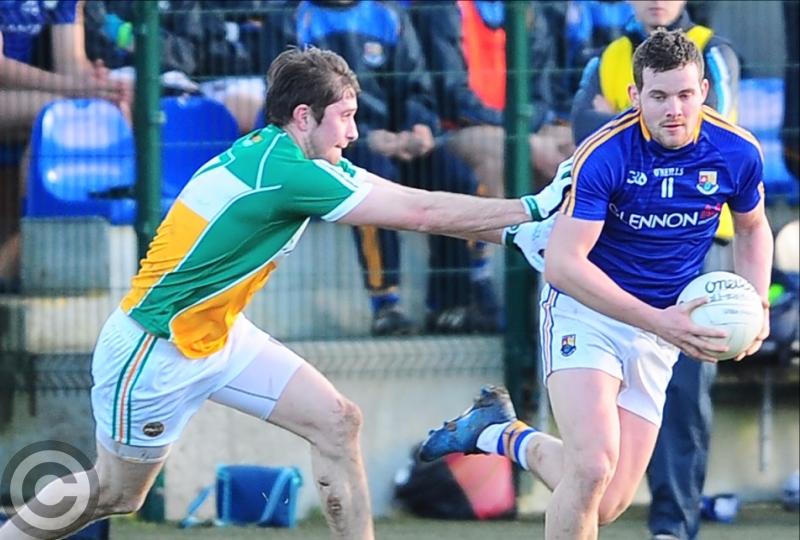 After failing to convert a couple of clear-cut goal chances in the first half and who had to settle for a slender 0-7 to 0-6 lead at the break, Longford gradually pulled away in getting the better of Offaly in comfortable fashion at Glennon Brothers Pearse Park on Sunday last.

Watched by a disappointing attendance in the region of 500, it was vital for Longford to make a winning start on home ground in Division 3 of the National League and while manager Denis Connerton will be pleased with the result there is plenty of room for improvement as the county seniors face a difficult task away to Louth in Drogheda on Sunday next.

Deadly accurate corner-forward Robbie Smyth was very much the main man in firing over the impressive total of seven points (four frees) but a considerable cause for concern is the ankle injury sustained by the Abbeylara marksman who was eventually forced to retire in the 59th minute.

Smyth was replaced by Larry Moran and as it turned out it was the Killoe attacker who struck the killer blow in the 66th minute with a well-taken goal that put the issue beyond all doubt as Longford had now established a commanding 1-12 to 0-7 cushion.

Moran was put through by the industrious Barry O’Farrell, punishing a costly mistake by an Offaly player who lost the ball in his attempt to clear the danger.

The visitors had suffered another severe setback a couple of minutes earlier when substitute Joey O’Connor (who was just on the pitch) was shown a harsh red card for a foul on Liam Connerton.

Even though they were down to 14 players and fighting a losing battle, the faithful county battled it out to the bitter end to register three consolation points through Bernard Allen (two frees) and defender Sean Pender and had another player sent-off in the third minute of stoppage time when midfielder Eoin Carroll received a second yellow card.

Offaly fielded a much understrength team on Sunday last with top class forward Niall McNamee missing as he recovers from injury while another notable absentee was the versatile Johnny Moloney who is also currently on the casualty list.

On the other hand, Longford were also badly hit as apart from the long term injured Michael Quinn one match suspensions ruled out both Darren Gallagher and Diarmuid Masterson but both will be back for the tricky trip to Louth.

Longford had a goal chance as early as the 5th minute when the generally prominent midfielder John Keegan raced clean through but elected to take his point while terrific point-blank saves produced by the Offaly keeper Ken Garry (one of just two Rhode players in action on this occasion) prevented Sean McCormack and Liam Connerton from finding the back of the net in the 10th and 16th minutes respectively.

Even one goal in the opening quarter of this scrappy encounter would have given Longford some breathing space and while the home side  also kicked five wides in the first half, Offaly were also extremely wasteful in attack as they dropped several point scoring attempts short into the hands of the opposing keeper Paddy Collum who made a brilliant save at a crucial stage of the second half.

Robbie Smyth accounted for five (three from play) of Longford’s seven points in the first half with John Keegan and Sean McCormack (a great strike) getting the other Longford scores while corner-forward Bernard Allen was proving to be the biggest threat for Offaly with four points (two frees) to his credit.

Wing back Declan Hogan and full-forward Nigel Dunne (free) were also on target for Offaly, who were gifted one of their six points just on the stroke of half-time when a John Keegan free from a mark went completely astray as he played the ball back into Allen, who was subsequently stopped by Paul McGee who received a black card for the foul.

Up stepped Allen to convert the resulting free to leave just the minimum of margins separating the sides at the break but Longford made the better start on the changeover with a further brace of points (frees) through Sean McCormack and Robbie Smyth.

After then losing McCormack for a black card offence, the home side had a lucky escape in the 48th minute when Bernard Allen sent Graham Guilfoyle racing clean through with only Paddy Collum to beat but the Fr Manning Gaels netminder made a great save to deny Offaly the equalising goal.

Leading by 0-9 to 0-6 and with neither side managing a score for 15 minutes, Longford extended their advantage with two more points in quick succession from Robbie Smyth (free, 54 mins) and Paddy Collum (‘45) and the entire team were working really hard to consolidate the grip on the game.

A couple of other good chances were wasted by Longford in front of the posts when goals were on before Offaly finally got their first score in the second half when Bernard Allen shot over the bar in the 61st minute.

Offaly then had Joey O’Connor sent-off and after Barry McKeon fired over a free in the 65th minute, Larry Moran scored the Longford goal moments later to make absolutely certain of the success in a confidence boost for the eagerly awaited clash against Louth, who scored a most impressive 2-16 to 0-10 win away to Laois in Round 1 last weekend.