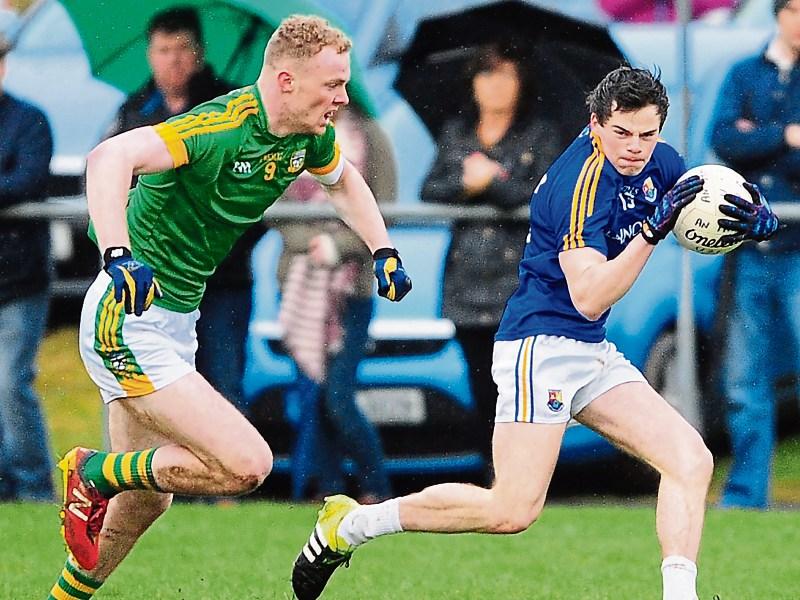 Goals at crucial stages of the game swung the issue in favour of Meath as they eventually got the better of Longford after extra-time in the highly entertaining Hastings Cup U-21 Football Tournament Final on Sunday last.

Watched by a big attendance in the region of 600 spectators at Lynch Park in Abbeylara, it must be said that the home county have really only themselves to blame for losing the game as they were guilty of squandering several chances and the four wides they kicked in a row in the early stages of the extra-time period proved to be very costly in the finish.

Longford were looking the likely winners when substitute Robbie Clarke (who was just brought on) slotted the ball over the bar in the 53rd minute to leave his side leading by 1-9 to 1-7 but Meath, resolute as ever, came storming back to hit the front with a cracking goal from dangerous corner-forward David McLoughlin in the 56th minute.

Moments later, the visitors extended the advantage with a point from Sean Reilly but gutsy Longford deserve a lot of credit for refusing to accept defeat as the game dragged into the lengthy stoppage time with Westmeath referee Sean Carroll allowing over five additional minutes.

Half-time substitute Conor Farrell broke from the defence to land a fine point and then with the very last kick of the game Shane Kenny kept his composure to convert a brilliantly struck ‘45’ to snatch a draw (1-11 to 2-8).

And so extra-time was required to determine the destination of the Hastings Cup and after Longford wasted four good chances it was Meath who regained the lead when Thomas O’Reilly converted a free after the game was held up for six minutes.

Unfortunate Clonguish clubman Ronan Sweeney was stretchered off the pitch after sustaining what appeared to be a serious ankle injury but Longford went on to regain the lead (1-13 to 2-9) with a point apiece from Shane Kenny and Russell Brady, the latter most prominent in the half-back-line throughout this cracking contest despite the difficult wet and damp conditions.

But the decisive moment in the final materialised two minutes into the second half of extra-time when Meath scored a third goal as David McLoughlin finished the ball to the net from close range and they went further ahead when Thomas O’Reilly fired over a free.

Three points down, Longford tried their best to salvage the situation in a very tense final few minutes but some more chances were missed with Robbie Clarke almost grabbing a dramatic equalising goal but the angle was too tight as he shot into the sidenetting.

There was still time for another goal chance to be created and after Aidan McElligott did well to win the ball on the endline he blasted his shot over the bar for a point with Meath very relieved indeed to hear the sound of the final whistle seconds later.

While getting such a tough competitive fixture in the build up to the Leinster U-21 Championship quarter-final away to Kildare on March 1 was a bonus, the Longford players will be bitterly disappointed with this defeat and particularly so when some silverware was at stake.

Boosted by a goal from a penalty converted by Nigel Rabbitte with five minutes gone in the game and powered by the commanding figure of the excellent David McGivney at centrefield with the Mullinalaghta man shooting five points (three frees) in normal time, Longford still trailed by the minimum of margins at the break, 1-5 to 1-4.

After the home keeper Conor Gallagher made a terrific point-blank save to prevent Conor Moriarty from finding the back of the net in the 22nd minute, the same player made no mistake when he got a second goal chance for Meath in the 29th minute.

David McGivney (3) and Conor Berry accounted for the four Longford points in the first half while the other Meath scores were registered by Moriarty (free), David McLoughlin (3) and Thomas O’Reilly.

The ding-dong battle continued in the second half with the sides deadlocked at 1-7 apiece after 48 minutes with McGivney kicking another brace of points (the second a tremendous strike from play) and Nigel Rabbitte also on target for Longford while Moriarty and O’Reilly replied for the royal county.

Moments later the generally prominent Rabbitte scored another fine point to put Longford ahead and it was looking good when Robbie Clarke extended the lead, only for David McLoughlin to score the second Meath goal as the game ended up all square thanks to the last gasp Shane Kenny score.

When McLoughlin found the back of the net again in extra-time, it proved to be the killer blow for Longford who were left to rue those many missed chances during the course of the extended Hastings Cup title decider.